Revealing Mithras’ Color with the ICVBC Mobile Lab in the Museum

:
The National Museum of Rome has an important collection of Mithraic sculptures found in the years 1973–1975 during the archaeological excavation under the early Christian basilica of Santo Stefano Rotondo on the Caelian hill in Rome. The sculptures excavated from this Mithraeum show many traces of gilding and polychromy, whose best example is the great bas-relief with Mithras slaying the bull discussed in this work. The analysis was conducted during a scientific campaign in the museum with portable instrumentation of the Institute for Conservation and Valorisation of Cultural Heritage, ICVBC mobile laboratory following a completely non-invasive approach. By means of a protocol based on the use of multispectral imaging, microscopy, X-ray fluorescence (XRF) and fiber optic reflectance spectroscopy (FORS), this study allowed to better understand the technique used and to make comparisons with other representations of Mithras slaying the bull.
Keywords:
Mithraeum; residual polychromy; non-invasive analyses; XRF; FORS; multispectral photographic techniques; Santo Stefano Rotondo; Museo Nazionale Romano; Isis; Mithras

During archeological excavations, conducted in the years 1973 to 1975, under the early Christian Basilica of Santo Stefano Rotondo on the Caelian hill in Rome, several Mithraic sculptures were found. Today, this important collection is displayed in the Museo Nazionale Romano, Terme di Diocleziano in Rome.
The church was built in the 5th cent. on the area formerly occupied by the barrack of the Castra Peregrinorum, which hosted one of the best preserved Mithras cult places [1]. The construction of the church dates back to the 60 s of that century, confirmed by the results of dendrochronological analysis on some wood beams [2].
In Figure 1a the plan of the church of Santo Stefano Rotondo, with the underneath remains of the Castra Peregrinorum is reported. The Mithraeum was established there around 180 CE, in the so-called “Building B” and is encircled in red in Figure 1a. In a second phase, at the end of the 3rd century CE, the Mithraeum was enlarged and re-built [1]. The Figure 1b shows this reconstruction.
Decorations of both phases are still preserved in situ, such as on the northern wall, where a painting with the Moon (first phase) is still visible after the re-painting of the second phase. As already mentioned, during the excavations some sculptures were found. Some of them were close to the altar: for example, Mithras born from a rock, holding a knife and a torch, which dates back to the end of the 2nd century [3], a big slab with Mithras slaying the bull (end of the 3rd century) [4] and another small slab with a similar representation (late 2nd–early 3rd century CE) [5]. These slabs were immediately noticed at the time of the excavation, for their rich polychromy. Lissi-Caronna, the archaeologist who worked on the excavation, described in detail the color traces at the time of the excavation, on the objects found in the Mithraeum [1]. In particular, the artifact characterized by the richest polychromy is the big marble bas-relief with Mithra slaying the bull which will be the subject of this study (Figure 2). The slab was brightly colored and to this day has indeed kept generous traces of the original polychromy. This category of artworks is very interesting in a polychrome context and in terms of its conservation. Unlike architectural decoration and outdoor sculptures, many of the hypogean slabs had optimal conditions of conservation in underground buildings and were well protected against atmospheric agents. Until today, the sculptural objects dealing to Mithraic contexts have been described and documented in detail by archaeologists, on the stylistic point of view, but often just briefly mentioning the painted parts. Although in most cases the surviving colors are scarce and the current understanding of the pictorial patterns is limited, it is generally accepted that this category of artifacts were originally painted.
Due to the remarkable good state of conservation of the bas-relief, the present study not only provides a direct knowledge of the chromatic scheme and of the pictorial techniques of this period, but also sheds light on a category of monuments whose polychromy remains poorly studied. The study is part of a larger project that dealt with the characterization of the residual polychromy of all the objects found during the archaeological excavation in 1973–1975 and currently exhibited in the room of the oriental cults of the National Museum of Rome (Terme di Diocleziano). The sculptures were analyzed at the same time, following the same analytical protocol and the results will be shown in forthcoming publications.
Systematic studies of the remnants of antique paint have been carried out in the past few decades. To enrich the knowledge about pigments, their composition and state of conservation of polychromy on stone artworks, archaeometry provides detailed and comprehensive information. Although a wide range of conventional micro-invasive techniques could be applied but up to now, few scholarly publications contain an exhaustive overview or any standardized methodology in studies about ancient polychromy on sculptures. At this stage of the research about polychromy, papers combining technical and archaeological analysis are essential to place comparisons from a scientific point of view [6,7,8,9], thus permitting a deeper knowledge of the real aspect of Greek and Roman sculptures. This study shows the application of a totally non-invasive protocol characterized by the combination of several analytical techniques on Mithraic sculpture.

One of the main challenges of this investigation was the tracking and the recording of the traces of color using portable and non-invasive techniques. A first visual examination was done following the Lissi-Caronna description of the slab. On the basis of this examination, visible, ultraviolet luminescence and infrared luminescence images were acquired in order to spatially characterized the presence of pigments and other painting materials. Addressed by these results, elemental and molecular analysis by X-ray fluorescence (XRF) spectroscopy and ultraviolet-visible (UV/Vis) fiber optic reflectance spectroscopy (FORS) was performed in the attempt to better characterize the painting materials on the surface. Visual documentation and details were acquired through visible photography (Vis) and a portable optical microscope (MO).

The investigation of the polychromy of the slab provided us with valuable insights into chromatic choices of Roman painting techniques. It demonstrates that the range of the palette was fairly wide and the use of it was subject to certain technical choices. An extensive color palette, yellow ochre, red iron oxide, pink madder lake, Egyptian blue, organic black were applied, combined with gilding added in large areas of the slab, covering most of its surface.
The colors’ choices were also related to a specific color code in the Mithraic cult: comparing this slab with other images with Mithras tauroctonos, such as the wall paintings in the Santa Maria Capua Vetere, Marino and Palazzo Barberini (Rome), is recognizable a similar color scheme. Mithras’ garments are often red, the bull is white, Cautes wears clothes filled with brighter colors than Cautopates (and this could be a direct reference of their opposite meaning in Mithraic cult). So, the colors of the slab in the Museo Nazionale Romano were applied following a specific color code. However, this particular meaning of the color could not be completely understood, without a comparison with the wall paintings and other color traces on artworks related with Mithraic cult. For this purpose, an interdisciplinary research is necessary. By means of a combined non-invasive approach using visual observations, multi-band imaging, microscopy, XRF and FORS this study allowed to acquire new data and provide a detailed documentation of surviving color and its relationship with other polychrome representations of Mithras. Moreover the well-established protocol allowed us to obtain as much information as possible without a sampling campaign and as little stress as possible for the artefact, avoiding the handling, thus permitting the development of the research on other artworks, in order to understand deeply the color choices of Mithraic cult. 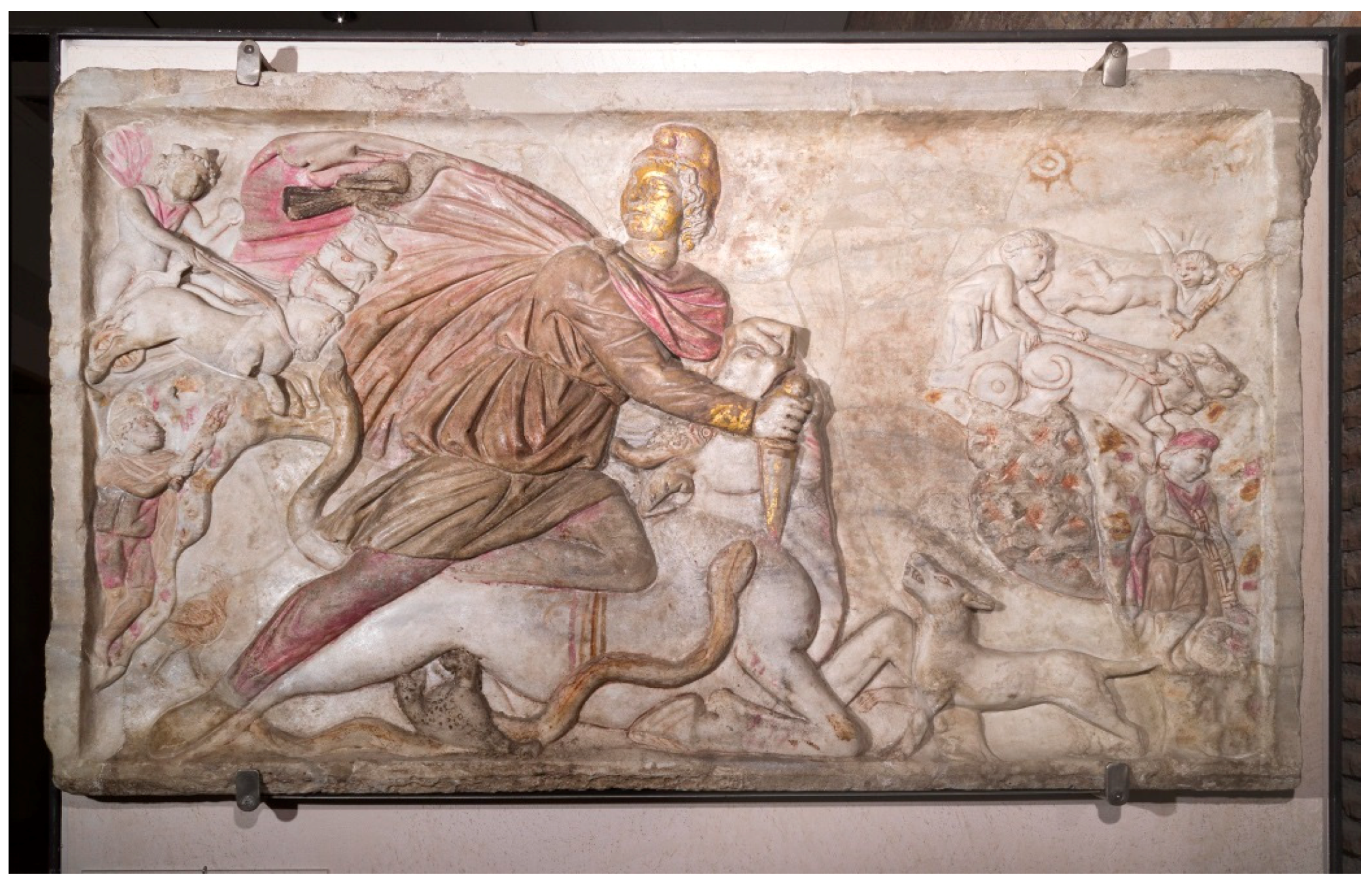 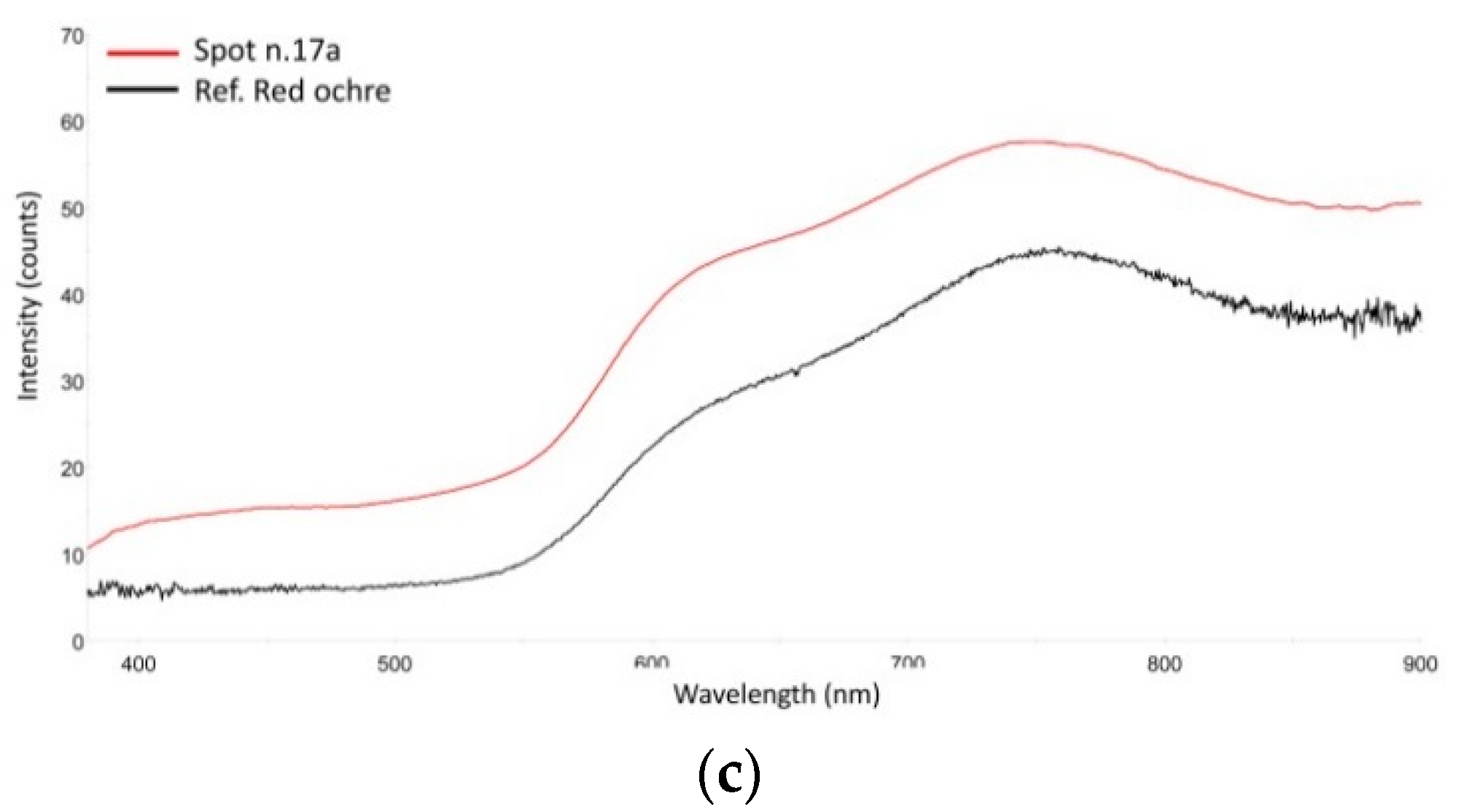 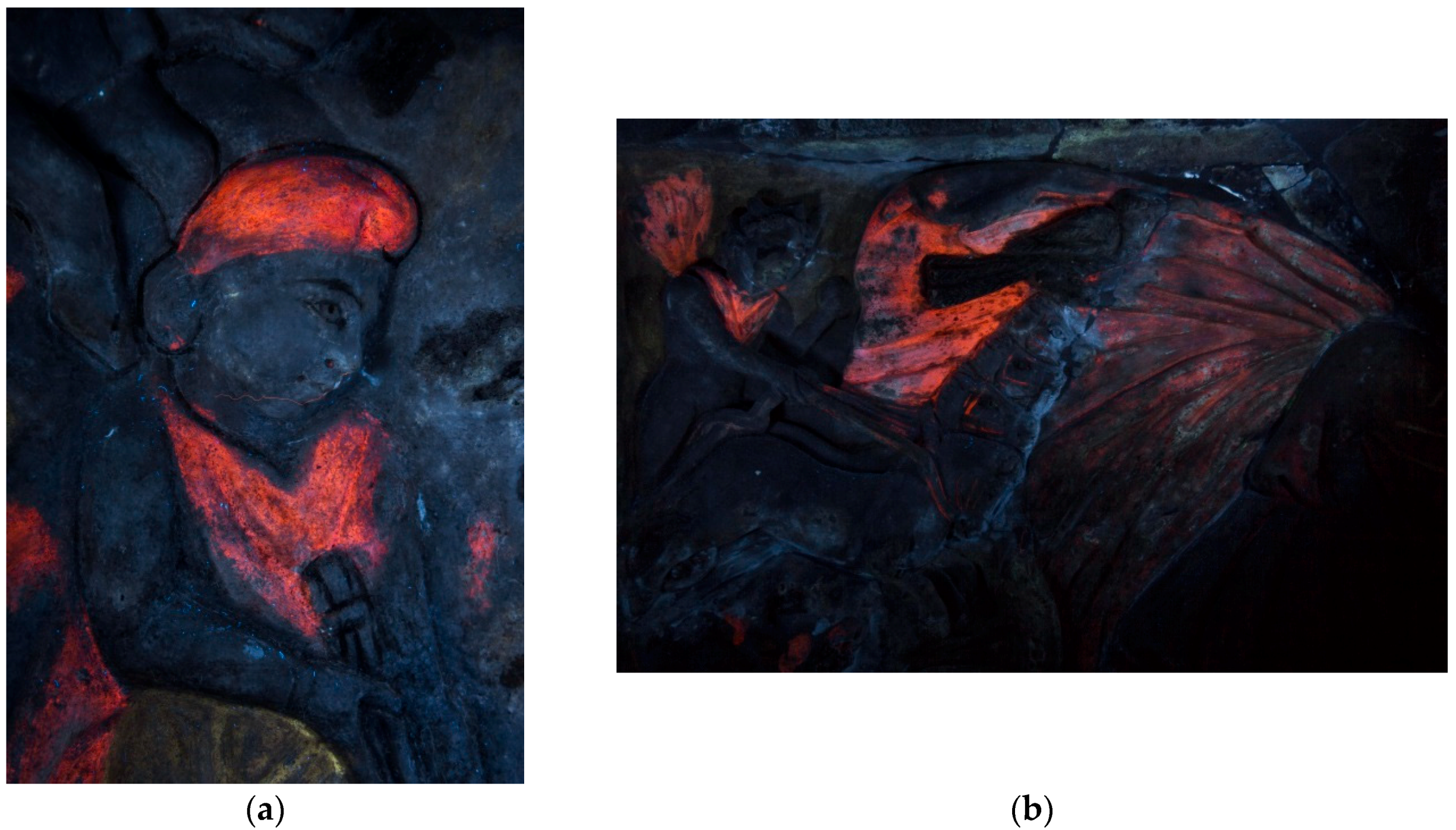