The Khmer monuments consist of Hindu and Buddhist temples built by the Khmer people between the 9th and 15th centuries. The monuments are distributed in Cambodia, Thailand, Laos, and Vietnam. The most famous and important Khmer monuments include the Angkor monuments, which are distributed mainly around Siem Reap City (Figure 1). Because the temples are built mostly of stone, iron tools, such as chisels, were required to quarry stone blocks. A scene in the bas-relief of the Inner Gallery of Bayon shows individuals quarrying stone blocks using long chisel-like sticks (Figure 2a). However, quarries in the Angkor period at the foothill of Mt. Kulen, which are located ~30 km northeast of the Angkor monuments [1], have oblique quarrying traces on their stone surface (Figure 2b). This may suggest that pickaxes, instead of long chisels, were used to quarry stone blocks (Sato and Yamaguchi, personal communication). However, incomplete bas-reliefs in some Khmer Temples, such as the Terrace of Leper King, indicate that chisels were used to carve the bas-relief. In the Khmer monuments, stone blocks were piled up without cement-like adhesives between blocks. To fasten stone blocks to each other, H-shaped crampons have been used in some places (Figure 2c) [2]. In the Ta Keo and Bakong temples, many holes remain from theft of these iron crampons (Figure 2d). Therefore, iron products were used to construct the Khmer monuments. This suggests that iron making was carried out in the Khmer period. In addition to iron tools for stone quarrying and processing, it is expected that iron was used for agricultural and military objectives [3]. Iron fragments that are considered to be part of armatures were found at the Royal Palace in the Angkor monuments [4]. As evidence of iron making, iron slags, which were generated and disposed of in the iron-making process, have been found at the Khmer monuments [5]. Many slag dumps exist in Preah Khan of Kompong Svay [6,7]. Iron ores have also been found in the slag dumps. In this study, iron slags and ores were collected from the slag dumps, and the chemical compositions of constituent minerals were analyzed to determine whether the compositions of the iron slags and ores were different, and to deduce the provenance of the iron ores. In this paper, the term “minerals” was used for convenience for the chemical phases constituting iron slags although they are not natural products [8].

After embedding 1–2 cm-diameter iron slag or ore fragments in an epoxy resin (EpoFix, Struers), the mounts were ground with waterproof silicon-carbide papers (#80, #180, #800, #1200, and #2400, Struers) and were polished with 3 μm and then ¼ μm diamond pastes (Struers Diamond Pastes M and P, respectively).
The polished slag and ore samples were studied under a reflected polarizing microscope, and mineral identification was carried out. The chemical composition analyses of minerals that constituted iron slags and ores were conducted on a polished cross section of each sample using a scanning electron microscope (JSM-6300, JEOL, Tokyo, Japan) equipped with an energy dispersive spectrometer (INCA Energy, Oxford Instruments, Abingdon, UK) (SEM-EDX). The samples were coated with carbon. The accelerating voltage was fixed at 15 kV, and the beam current was adjusted so that the X-ray count was 2000 count/s on the Co surface. The analysis time at each point was fixed at 60 s. For each sample, the analysis was carried out on three to 10 grains of fayalite and wüstite, respectively, and 3 to 6 grains of magnetite for each sample.
Radiorcarbon dating was carried out on the charcoal fragments that were collected from the iron slags. Measurements were carried out by Paleo Labo Co., Ltd. [12].

Iron ores from the slag dumps and outcrops in Phnom Daek consisted mainly of magnetite and hematite (Figure 5a). We observed a texture where hematite replaced the magnetite in part. Therefore, it is thought that the iron ores consisted mainly of magnetite initially, and that the magnetite changed partly to hematite by hydrothermal alteration. The iron ores are commonly accompanied with quartz, and grandite-series garnet was present in the iron ores that were collected near Svay Damnak. These facts suggest that iron ores were formed by a hydrothermal metasomatism of carbonate rocks, which is related to granitic rocks.

The iron slags consist mainly of fayalite and wüstite (Figure 5b). Wüstite shows a skeletal texture often. In addition to the two minerals, magnetite or metallic iron was observed under the microscope, but these never coexisted. A small amount of hercynite was commonly observed.
Fragments of charcoal that was used as a fuel and as a reducing agent were rarely included in the iron slags. Metallic iron is often seen around the charcoal fragments.

The ideal chemical formula of fayalite is expressed as Fe2SiO4. Because fayalite in the iron slags contains some MnO and MgO, fayalite was treated as a solid–solution in the system fayalite (Fa)–tephroite (Tep)–forsterite (Fo). The presence of CaO up to 18 wt.% indicates that fayalite (olivine) forms a solid–solution with kirschsteinite (Ca(Fe,Mg,Mn)SiO4). The analytical results are shown in Figure 6 as Fa–Tep–Fo triangular diagrams (Table S1). It was shown experimentally that fayalite forms a continuous solid–solution with tephroite and forsterite under hydrothermal conditions [13].
A cluster analysis was performed using the averaged chemical compositional data for fayalite (Table 2) from each site. Excel Tokei for Windows (Social Survey Research Information Co., Ltd., Tokyo, Japan) was used for a cluster analysis. The result for a cluster analysis using Ward’s method is shown in the dendrogram in Figure 7. The slag dumps were classified into two main groups: Groups 1 and 2. Fayalite in the iron slags of Group 1 is rich in FeO and depleted in MnO, MgO and CaO, but that of Group 2 is enriched in MnO, MgO, and/or CaO. Group 2 could be classified into five subgroups: Groups 2-A to 2-E. Fayalite of Group 2-A is rich in CaO > MnO = MgO; that of Group 2-B is rich in MnO = CaO > MgO; that of Group 2-C is rich in MgO > MnO, but is depleted in CaO; that of Group 2-D is rich in MnO > CaO, but is depleted in MgO; and that of Group 2-E is rich in MgO > MnO > CaO.
A principal component analysis (PCA) was also carried out using the data in Table 2 to clarify the factors controlling the classification in the cluster analysis. The results were shown in Figure 8. The slag dumps were classified into two groups the same as the cluster analysis. However, Group 2-D and Group 2-E obtained in the cluster analysis overlap each other on a PC1 vs. PC2 diagram. This is because positions of MnO and MgO are close to each other on the PC1 vs. PC2 diagram (Figure 8). On the other hand, they were well separated on a PC1 vs. PC3 diagram.
Slag dumps in the area surrounding Phnom Daek and those in the Angkor monuments were classified as Group 1, and those in Preah Khan of Kompong Svay were classified as Group 2 except for sites C and U.

The ideal chemical formula of wüstite is expressed as FeO, or more precisely as Fe1-xO. Wüstite in the analyzed slags contains some MnO and also small amounts of SiO2, Al2O3, TiO2, and CaO (Table S2). We treated wüstite as a solid–solution between FeO and MnO. The analytical results are shown and compared in Figure 9 as FeO vs. MnO diagrams. The MnO content in wüstite is low compared with fayalite because the partitioning of MnO into wüstite against fayalite is very low. The MnO content in wüstite depends on the crystallization temperature and speed. Wüstite in the iron slags of Group 1 is depleted in MnO (less than 1.5 mol%), except for some iron slags in sites C and U. However, wüstite in Group 2 is relatively rich in MnO, except for that in Group 2-A, which is rather rich in CaO. The MnO content ranges from 0 to 4 mol% in Group 2. A large overlap was found in the chemical compositions of wüstite between Groups 1 and 2.

This research was supported financially in part by Grants-in-Aid for Scientific Research of the Japan Society for the Promotion of Science (Uchida: no. 23401001) and Waseda University Grants for Special Research Projects (Uchida: 2016B-137).

This research was conducted under permission of APSARA National Authority and Ministry of Culture and Fine Arts of Cambodia. We would like to express our thanks to Nobuo Yamamoto of Waseda University and Robert McCarthy of JSA for providing iron slag samples from the Angkor monuments. We are grateful to SIENG Sotham and CHENG Rathborith of Ministry of Mines and Energy of Cambodia for their help during the field research in Phnom Daek. We appreciate three anonymous reviewers for their insightful comments as well as Giada Trezzi for editorial input and suggestions. We thank Edanz Group for editing the English text of a draft of this manuscript. 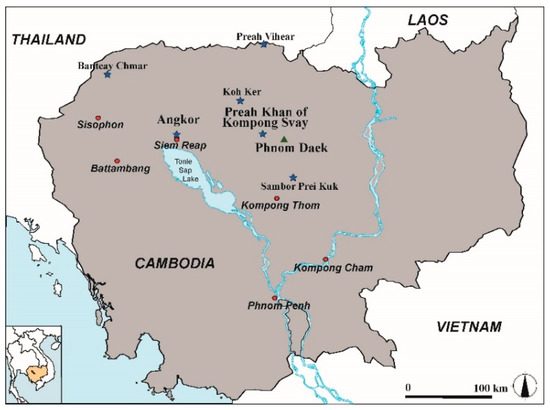 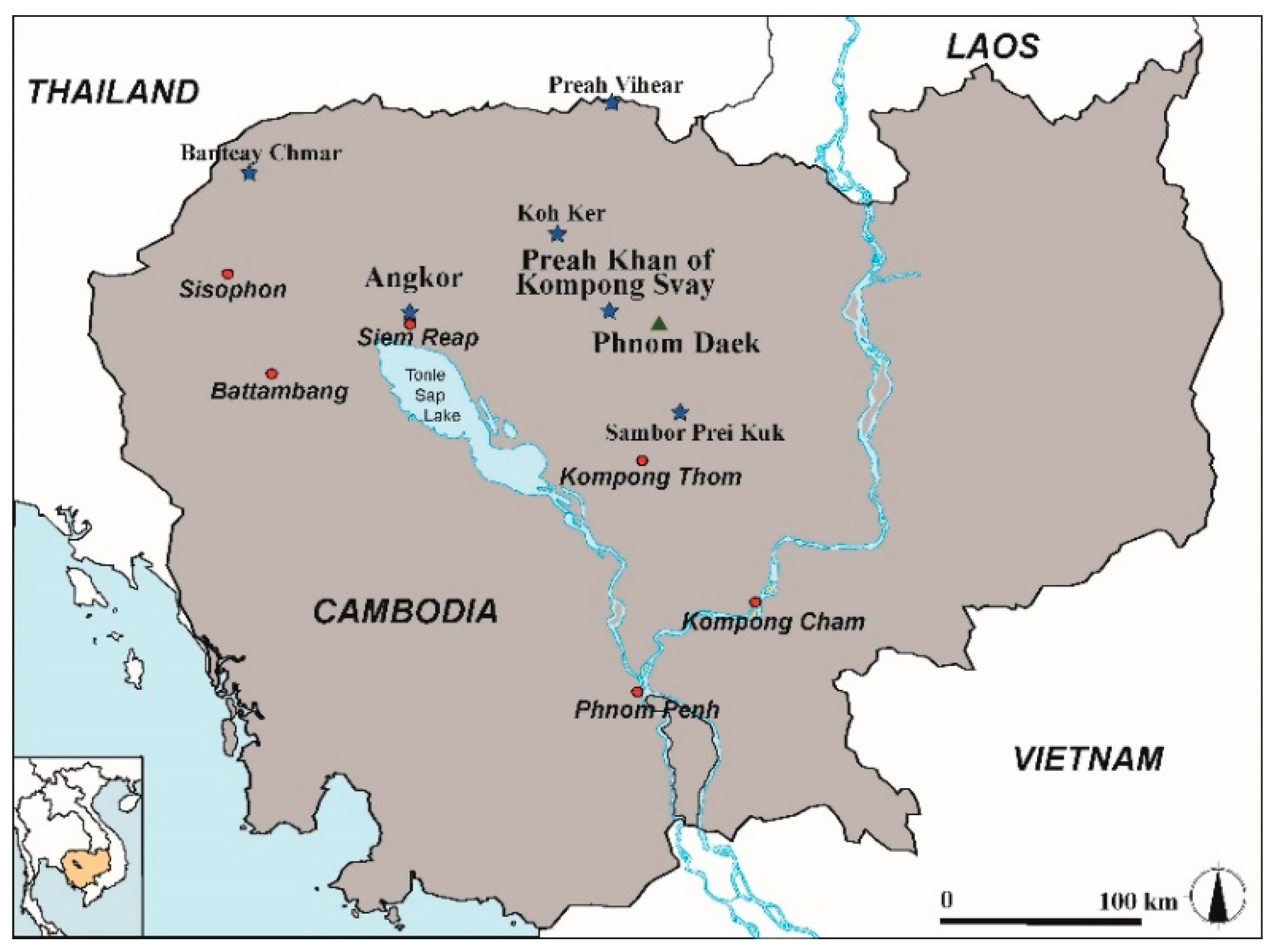 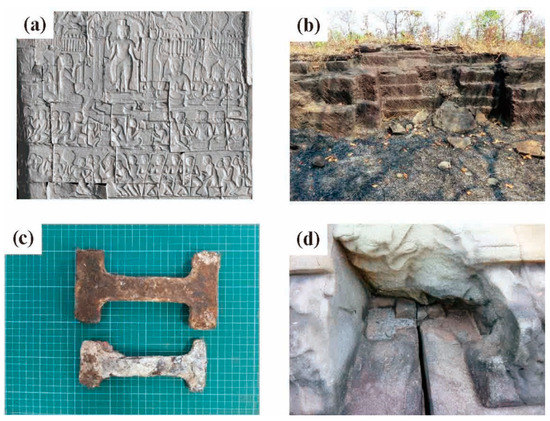 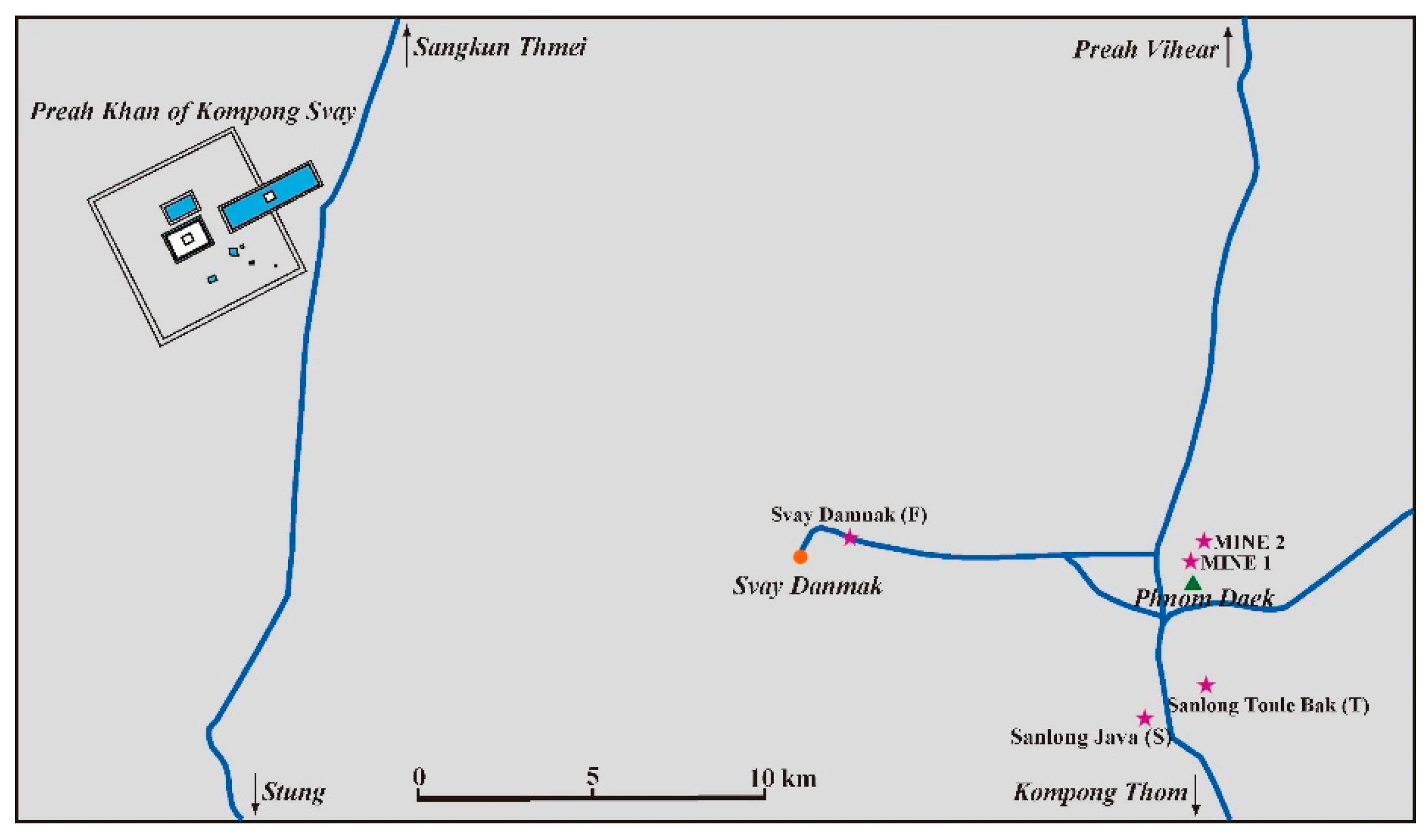 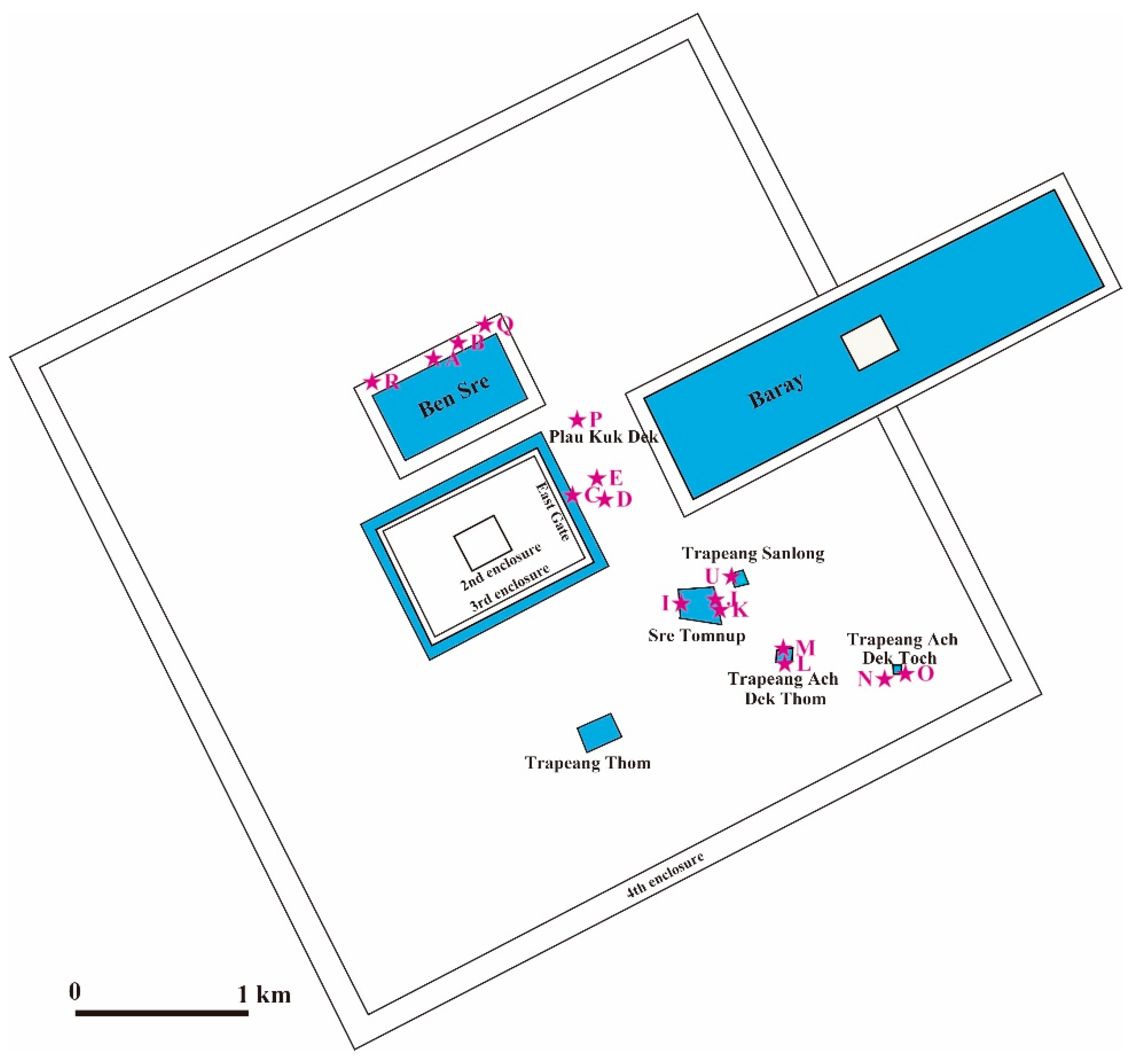 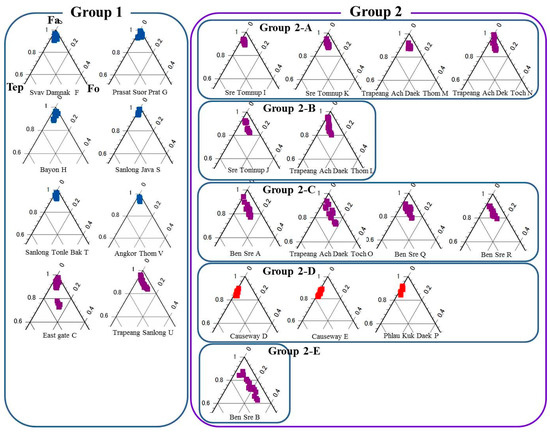 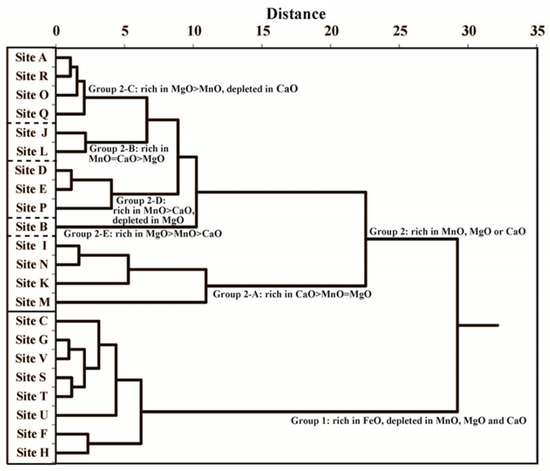 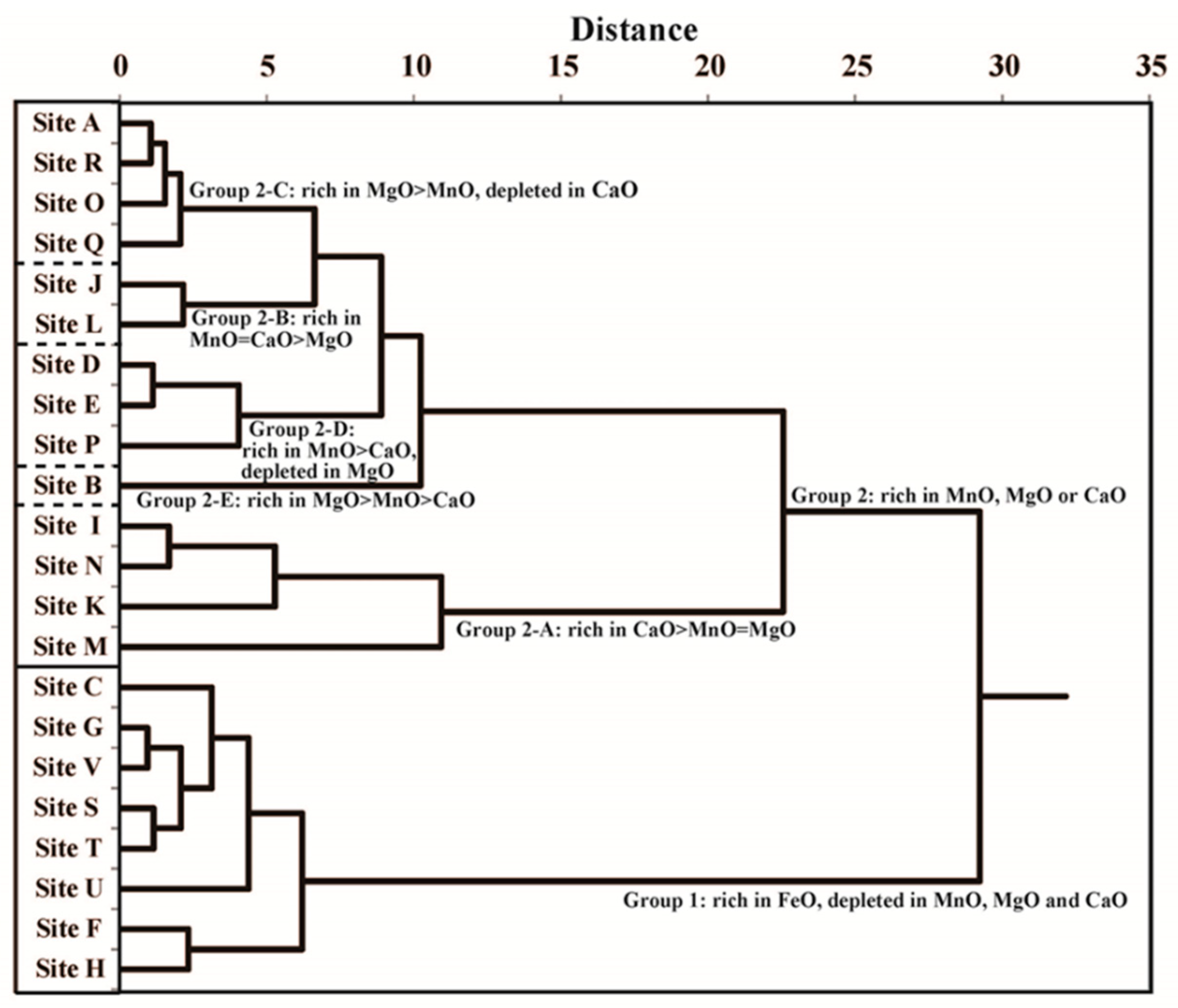 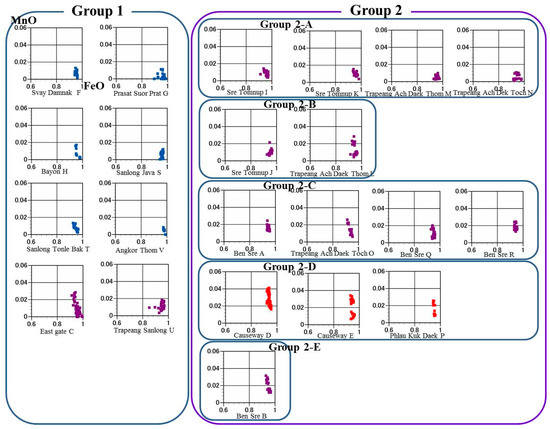