Ethical and Legal Considerations for Collection Development, Exhibition and Research at Museums Victoria
Next Article in Special Issue

:
This paper concerns the path of knowledge that leads to the understanding of the morphology and evolution of the archaeological area discovered in the 1960s below the parish church of Gropina (AR). By dealing with archaeological surveying methods, the attention is focused on the digital survey technologies used, integrating data from laser scanner instruments with photogrammetric ones. The morphological base was necessary for the preparation of stratigraphic analyses, and allowed us to check the previous studies carried out on the building to extract a periodized planimetry. Finally, the digital drawing technologies have allowed us to hypothesize the schematic evolutionary models of the different phases of the building, and to use the digital survey to create a virtual platform through which to interact with the archaeological site, which is now closed to visitors.
Keywords:
digital survey; archaeology; Gropina

The era of digitization has greatly influenced the fields of architecture and relief, leading to an increase in detection methodologies over the past 20 years, through the tools and software that have led to the use of digital capture, such as laser scanners and photomodeling [1,2].
The theme of the digital survey aimed at the documentation and analysis of archaeological sites has been a subject for the DiDA (Architecture Department) Survey Laboratory of the University of Florence for many years [3]. This research area includes the documentation project of the Gropina’s parish church, which began in April 2016 and involved students and researchers of the DiDA survey course (Figure 1).
Gropina’s parish church is located in the municipality of Loro Ciuffenna, in the Upper Valdarno, in an area that has been settled since the Lower Palaeolithic period. During the Etruscan period, large settlement systems did not develop, but in the hilly areas there were small villages (the toponym Gropina could come from the Etruscan language, krupina meaning village); on the hills above Gropina, in the 1950s, a series of tunnels from the Etruscan period was found by the superintendence, attesting their presence in the area [4].
In Roman times, following the construction of the Via Cassia Vetus, corresponding to the current via dei Setteponti [5], the whole area enjoyed a flourishing commercial period that testifies to the birth of many settlements. The walls that were found during the archaeological excavations below the parish church are probably the remains of a residential building belonging to this period.
This research project, carried out by the University of Florence, aims to document the main features of the building. Firstly, a three-dimensional database was created from which to extract the morphological information necessary to set up the subsequent thematic analysis.
The realization of a three-dimensional survey (Figure 2) also has the purpose of studying and documenting the archaeological excavations conducted by the superintendency, in order to broaden the knowledge obtained and to allow us to better understand and analyze the traces of the past. In this process, the “drawing”—the tool used to reach a synthesis of data collected in the field—is fundamental support for the transmission of information among the different operators who contribute to the study of the monument. On the basis of what has been drawn, the archaeologist sets his own considerations regarding the building stratigraphy and construction phases.
Analyzing and interpreting the historical-archaeological data in excavation areas already investigated in the past is a process that considerably limits the knowledge of the object. The conclusions regarding the walls are based, in fact, only on the structures left visible today in situ during the previous excavation, and refer to the last layer investigated (the oldest). The history of the building is inevitably destroyed after the excavation operations. Archaeological interpretations are often included in more or less precise documentation that helps in the interpretive process of some historical periods, often the most ancient, but they are incomplete for the most recent chronological periods. It also has to be considered that the excavation, interpretation, and analysis methods of an archaeological site have changed and have been considerably refined over the last years. It is therefore essential to propose an archaeological analysis of the visible architectures of a building, integrating the data of the past with the new digital detection methods. This operation deepens the documentation of excavations, which were typically made 30 or 40 years ago, to complete the knowledge of the building, which is indispensable in terms of the research but even more so for the restoration and enhancement of the building.

The area in the subsoil of Gropina’s parish church is characterized by a series of architectural complexes of different historical periods (Figure 5). They were found after archaeological excavations carried out in the 1960s and 1970s by the superintendence when they rebuilt the floor of the building to eliminate a strong presence of humidity (Figure 6). The results that emerged from the excavations confirmed what was already reported in the bibliographical references—they attest to the presence, in the same place, of a religious building dated to the VIII century AD on the basis of sepulchral slabs [10]. The archaeological survey also allowed us to produce innovative data on the history of the area, highlighting two other complexes prior to the eighth century church—few traces remain of the apsidal structure, interpreted as a seventh-century paleochristian “ecclesia”, and, before this, a masonry building defined by archaeologists as a Roman settlement [11].
On the occasion of the survey carried out in 2016, a new stratigraphic analysis was carried out on the masonry of the structures described above, using the methodologies of the Archaeology of Architecture [12,13,14]. The analysis confirmed the findings of the excavation reports, attesting the presence of at least three buildings (CF) preceding the current Romanesque church.
For issues of space and focus, the first chronologically identified structure, probably from the Roman era, was not specifically discussed; the analysis focused on the second structure, built directly on the walls of the classical era and of clear religious vocation. The currently visible part, of which unfortunately only a few portions of masonry remain, seems to refer to a single-nave church. The materials found following the archaeological excavation directed by Maetzke allowed us to attribute the building to the early Christian period [15], of which there remain two portions of the apse—a perimeter wall and a small part of the pavement. Stratigraphically, the building was built in a period following the structure of the Roman period (it exploits its walls as foundations) but precedes an additional religious building, built above it, whose portion cuts the apse of the early Christian building. It is currently difficult to establish a more specific dating for this structure because there is no comparison material available for a chrono-typology of the identified masonries or specific chronological indicators, and there is no possibility of conducting laboratory analysis on construction materials.
On the second building, there is a third structure with characteristics belonging to a place of worship (there are aisles, apse, colonnade, and internal burials) built up and transformed into two construction periods—a church with a single apsed hall and an extension of the building with the construction of a second apsidal nave on the south side. Regarding the first constructive period, today only the apse is visible, which is cut to the south-east by the foundation of a Romanesque pillar. It is made with “un’ossatura muraria semicircolare in filaretto rustico di pietra appena sbrecciata ed unita con calce aderentissima” [16].
It is also possible to identify small portions of perimeter walls connected to the apse to the south-east and north-west. Regarding the second construction phase, a portion of the apse that ends the side aisle and a part of the masonry that stratigraphically leans on the wall of the early church is visible and is therefore chronologically subsequent to it.
In this phase, the construction of at least two columns is attested (the only two currently preserved) which divide the central nave from the lateral aisle. Between these two constructive periods, there seems to be a moment, which is difficult to interpret, when there was a foundation of a central wall at the aisle; this was stratigraphically in phase with some stone slabs forming a paved area with three steps. These steps cover the aforementioned wall, whose height is closely related to the first and second phase church. Since the pillars are built in the second phase, they are therefore cut into the pavement; the pavement seems to belong to the first construction phase, even if it is placed topographically outside the perimeter wall of the mono-apsed church. It is therefore very complex to define a specific function for this element. Another element that cannot currently be evaluated is the northern portion of the religious building of the eighth century, where the construction of the current parish church and its subsequent modifications have canceled the pre-existence of this structure (in this area there are only some wall structures related to the Roman building).
In conclusion, the construction of the Romanesque parish precedes the building of two other religious buildings. They had a significantly lower floor space; the first one was a single-nave church, probably from the early Christian period dating back to the seventh century, and the second one, from the eighth century, was also initially a single-nave church and was later enlarged with the construction of at least one nave on the south side (Figure 7; Figure 8).

The results obtained from the survey and the archaeological analyses were summarized in a periodized plan that correlates the masonry walls present in the archaeological site to the construction phases of the different buildings that have been replaced over time on the Gropina’s site. This information supplements and updates the excavation reports conducted in previous years. Further development of the research consists of the archaeological analysis of the medieval building—by combining the stratigraphic considerations with the diagnostic and structural analysis of the building, the static–dynamic behavior can be understood so as to plan effective consolidation operations if they are necessary.
The digital survey is a fundamental tool for the study and the development of considerations on the evolution of archaeological sites. Nevertheless, the need to establish regulations and procedures aimed at the documentation of the excavation area is clear, in order to create a fundamental document for the analysis of the stratigraphic relations between the various phases of construction of a building; these are otherwise difficult to identify, as in the case of the church object of this study.

The research project concerning the documentation and analysis of Gropina Parish Church was possible thanks to the collaboration between the Survey Lab. of DiDA (department of architecture), Florence University, the LAArch (Archaeology of building Lab.) of DSSBC (Historical sciences and cultural heritage department), Siena University and the municipality of Loro Ciuffenna (AR). The drawings are the result of a year of research conducted in the Architectural Survey Course (ay 2015–2016), coordinated by the writers and concluded with a master’s thesis in architecture (Elisa Parrini, discussed in April 2017) which analyzes how to use digital survey for the documentation on ancient buildings. 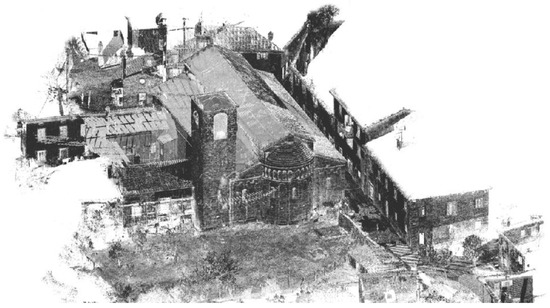 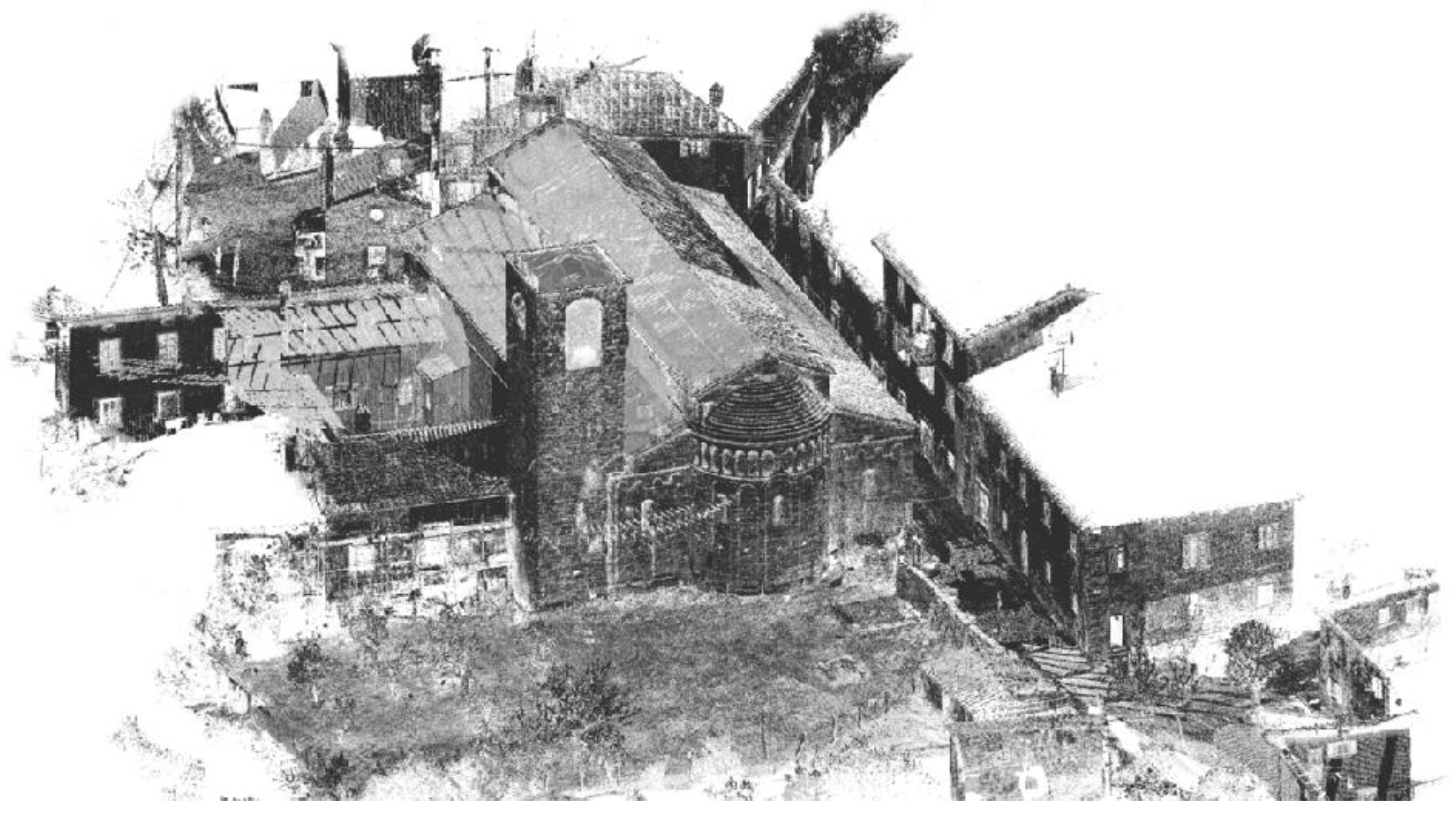 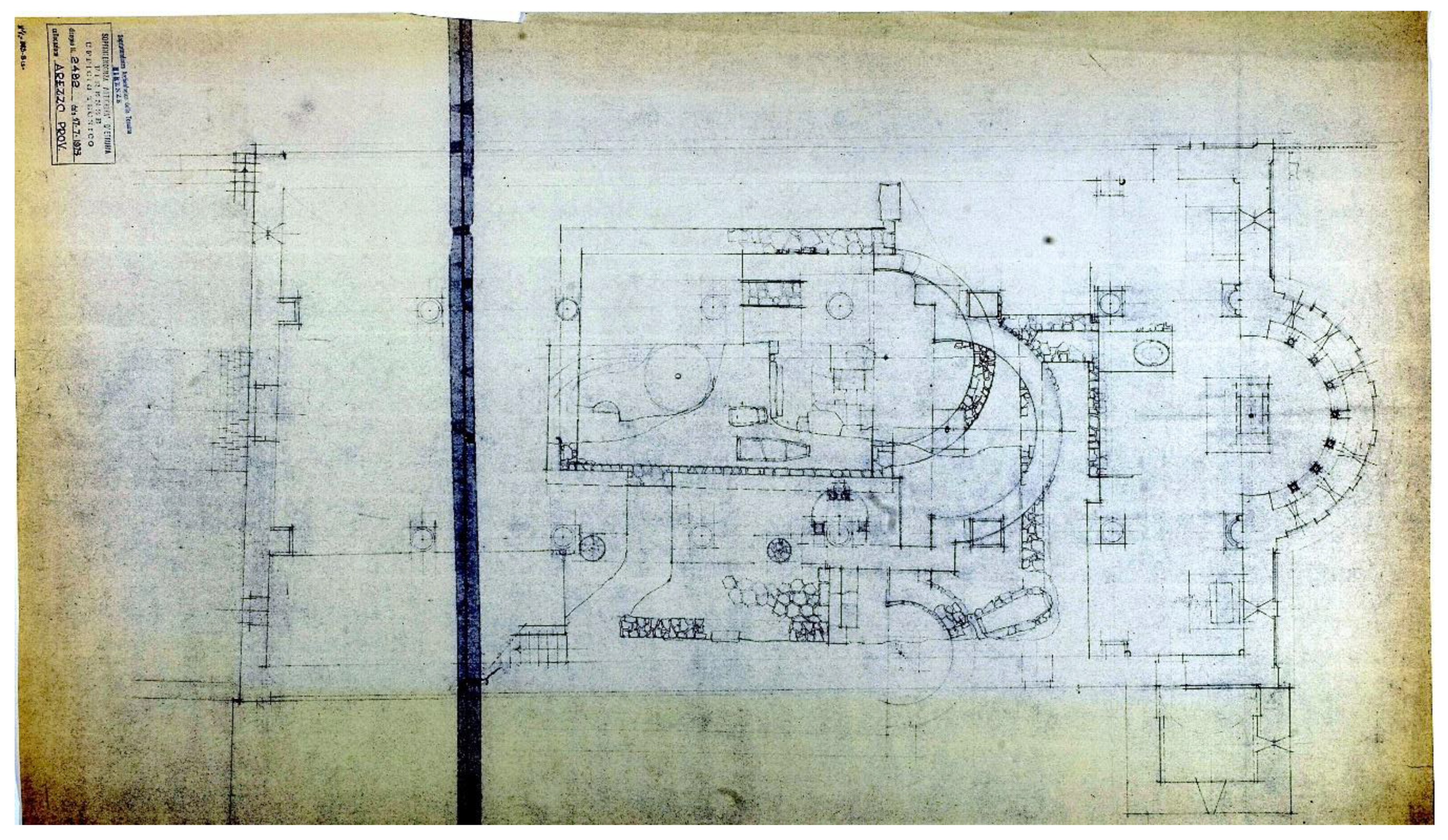 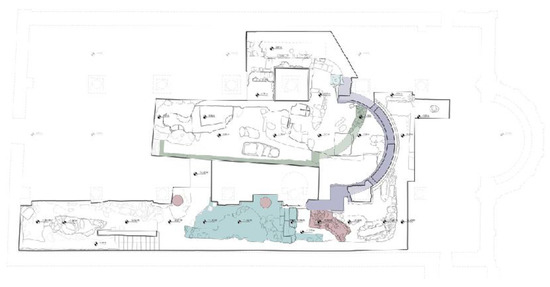