:
The increasing penetration of non-programmable renewable energy sources (RES) is enforcing the need for accurate power production forecasts. In the category of hydroelectric plants, Run of the River (RoR) plants belong to the class of non-programmable RES. Data-driven models are nowadays the most widely adopted methodologies in hydropower forecast. Among all, the Artificial Neural Network (ANN) proved to be highly successful in production forecast. Widely adopted and equally important for hydropower generation forecast is the HYdrological Predictions for the Environment (HYPE), a semi-distributed hydrological Rainfall–Runoff model. A novel hybrid method, providing HYPE sub-basins flow computation as input to an ANN, is here introduced and tested both with and without the adoption of a decomposition approach. In the former case, two ANNs are trained to forecast the trend and the residual of the production, respectively, to be then summed up to the previously extracted seasonality component and get the power forecast. These results have been compared to those obtained from the adoption of a ANN with rainfalls in input, again with and without decomposition approach. The methods have been assessed by forecasting the Run-of-the-River hydroelectric power plant energy for the year 2017. Besides, the forecasts of 15 power plants output have been fairly compared in order to identify the most accurate forecasting technique. The here proposed hybrid method (HYPE and ANN) has shown to be the most accurate in all the considered study cases.
Keywords:
hydropower production forecast; Artificial Neural Networks; run of the river hydroelectric plants; seasonal decomposition; HYPE model; RES generation

The here presented work aims at evaluating the forecasting performance of the proposed hybrid method, composed by a HYPE hydrological model and a ANN method. The model is applied on the power production time series decomposed in trend, residual and seasonality. This approach (Hybrid plus Decomposition) is then compared to three benchmark models: Hybrid, ANN, and ANN plus decomposition.
This section is structured as follows. At first, the available dataset for the proposed method validation is presented and described. In the second part, the error metrics adopted to evaluate the performance of the investigated methods are discussed. Finally, in the last subsection the novel hybrid method for RoR hydroelectric production forecast is detailed.

The dataset adopted to validate the proposed method is referred to Slovenia and consists of two parts: flow data and measured electric hydropower production in the period from January 2010 to December 2017.
Slovenia is modeled dividing it into 86 different sub-basins. The conditions and geographic features of each sub-basin are exploited by the HYPE model to return the inflow of the drainage basin (an area of land where precipitation collects and drains off into a common outlet, such as river, bay, or other body of water). In our specific case, just precipitations data are provided to the HYPE model, since rain is the main driver in hydropower generation. It has been collected rainfall daily data, measured in [mm], of three Slovenian meteorological stations. Climate data are taken from the “Copernicus Era5” meteorological database and are of public domain. For each sub-basin, geographical data are provided and a basin map based on sequentiality of sub-basins has been drawn: in particular three groups have been identified, and these groups of points represents the river-basin of the three main Slovenian watercourses: River 1, River 2, and River 3, represented in Figure 1.
The second part of the dataset is made by the hydroelectric energy produced [MWh] from 2010 to 2017 and Hydro-States, that informs about the status of each plant (working or not). The final purpose of the analysis is to predict the electric production of hydroelectric power plants, and specifically of big power plants (rated power > 20 MW). The dataset is cleaned by discarding those plants characterized by zero-production for a period greater than the 10 % of the total number of samples: three plants have been excluded, for a total of 15 RoR remaining plants, distributed on three rivers: 3 plants on River 1, 5 on River 2, and 7 on River 3. The preprocessing performed on the dataset aimed at testing the proposed method on a significant set of data, with few missing values, to evaluate its performance. The null power production observed in a plant could be due to human regulation rather than a lack of minimal flow in the river, uncoupling in this way the production from the Rainfall/CSB flow forecast. These cases are unpredictable by the algorithm, since they do not derive from a physical process and we have therefore decided to exclude them.
Data are converted on daily basis to have the same time-step of flow data. To validate the proposed method, all the available plants have been studied.

In the present work a series of indicator has been defined to evaluate the goodness of the prediction, in order to address different issues. Among the existing performance metrics, we selected the normalized Mean Absolute Error (1) (nMAE [31]) to evaluate the overall performance: where N is the total number of data sampl;, C is the maximum power measured over the period under analysis; and and are, respectively, the forecast power and the measured (observed) power at each time point. In addition, two metrics have been introduced. The Nash–Sutcliffe Efficiency Index (2) is commonly used to assess the performance of rainfall runoff models [32]; it varies in the range , where the unity is obtained in case of perfect forecast. The latter metric considered is the MASE (Mean Absolute Scaled error) (3), which is little influenced by the outliers [22]:

In this work, different approaches for daily hydroelectric production forecast, applied to fifteen RoR plants, along three different rivers, have been investigated. In particular it has been analyzed the effect, in terms of forecast accuracy, of diverse input data to the artificial neural network: sub-basins flow data derived from a hydrological model (HYPE) and precipitations data from three climate stations have been alternatively provided to a neural network in order to establish which can be more suitable for hydro-production forecast purposes. Furthermore the effect of production decomposition in its three components, trend, seasonality, and residual, has been analyzed. The hybrid approach, where precipitations are processed by the HYPE model to provide sub-basins flow as input to the ANN, outperformed the ANN model, both with and without decomposition. In addition, the hybrid forecast proved to be more performing than decomposed hybrid method in most of the analyzed plants.
Even if the presented case study is inherent to the RoR power plants, the current method could be adopted to other hydroelectric power plants characterized by the same features (seasonality, strong dependence on rainfalls and sub-basins flow, etc.). 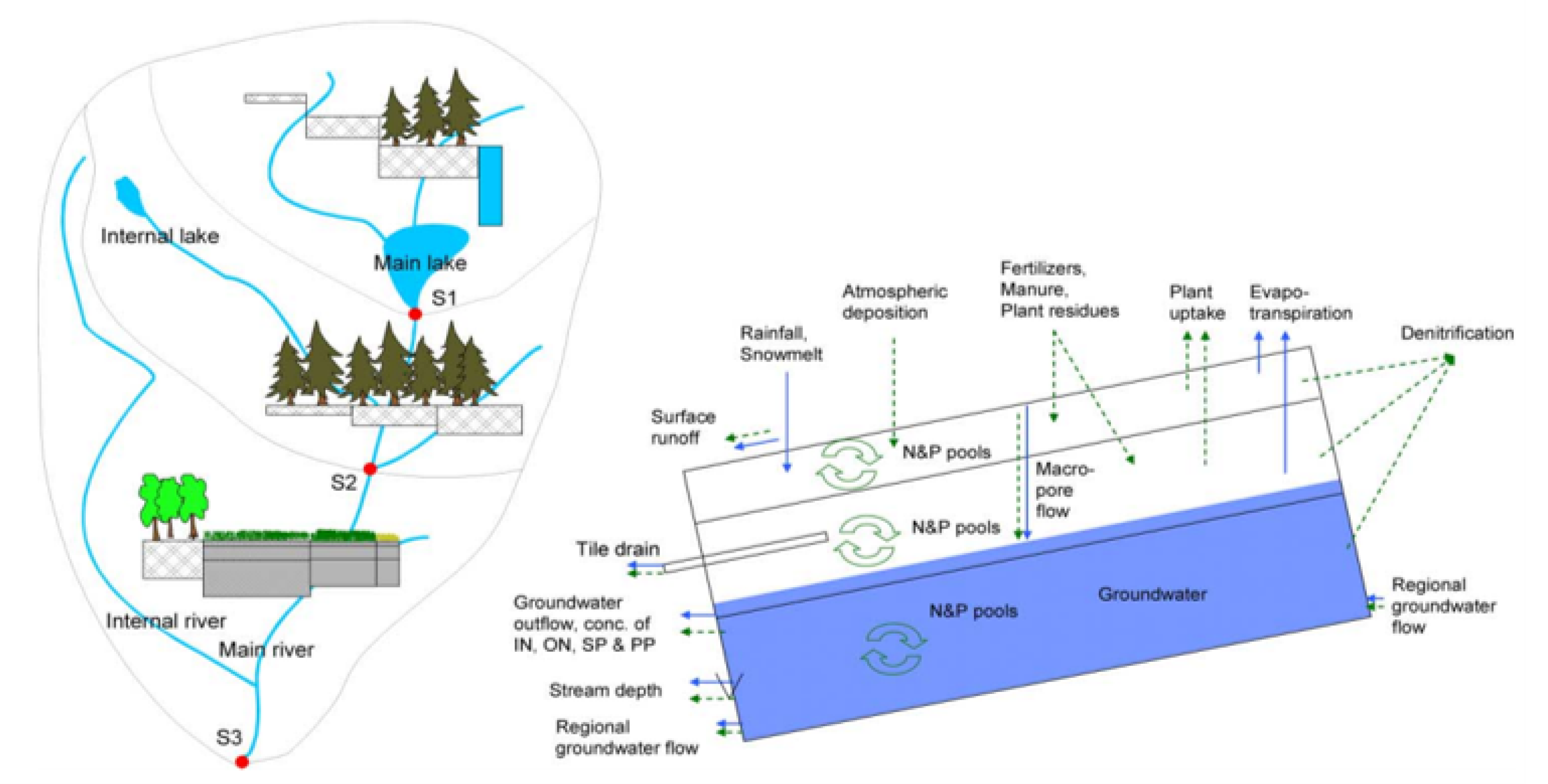 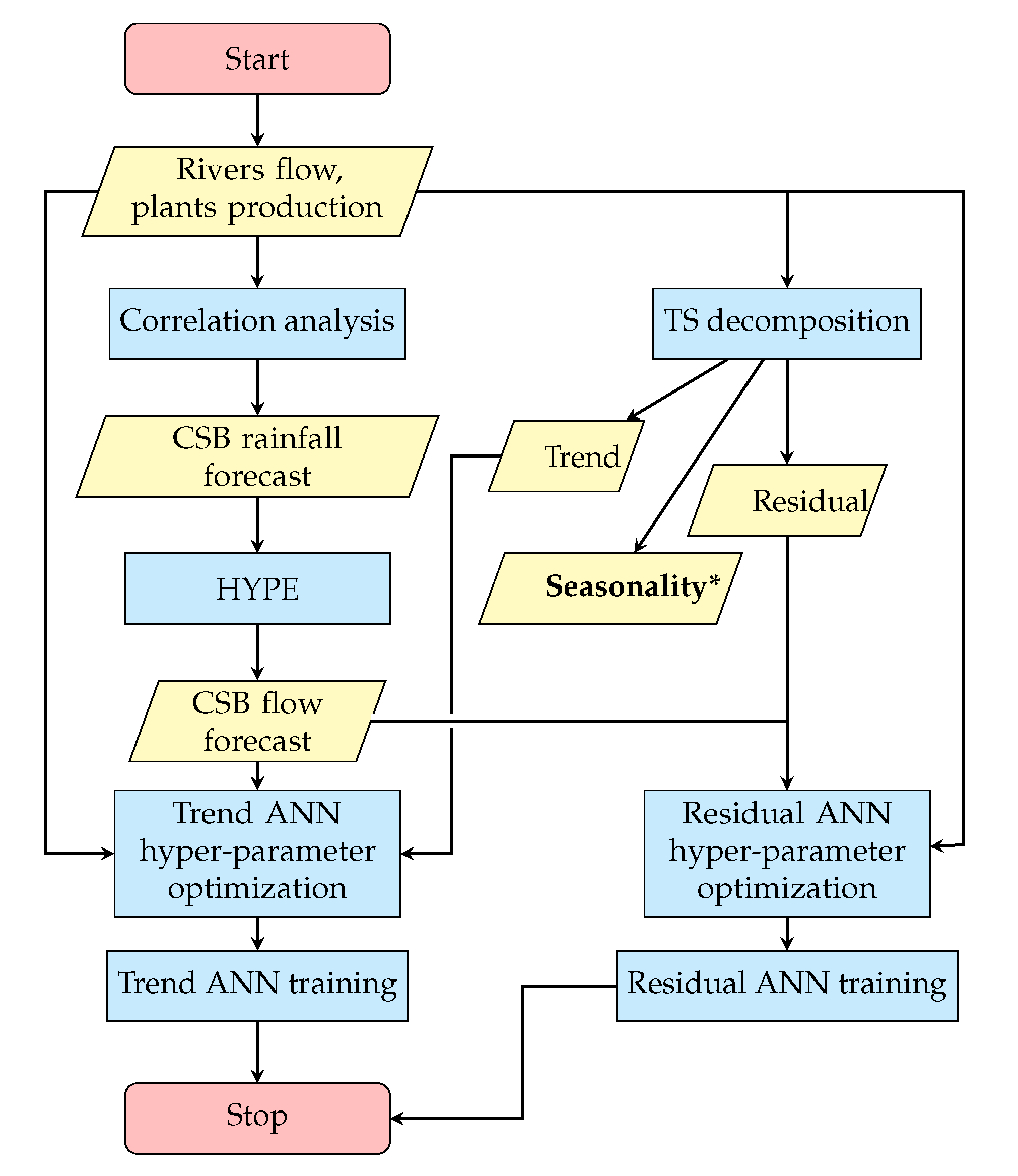 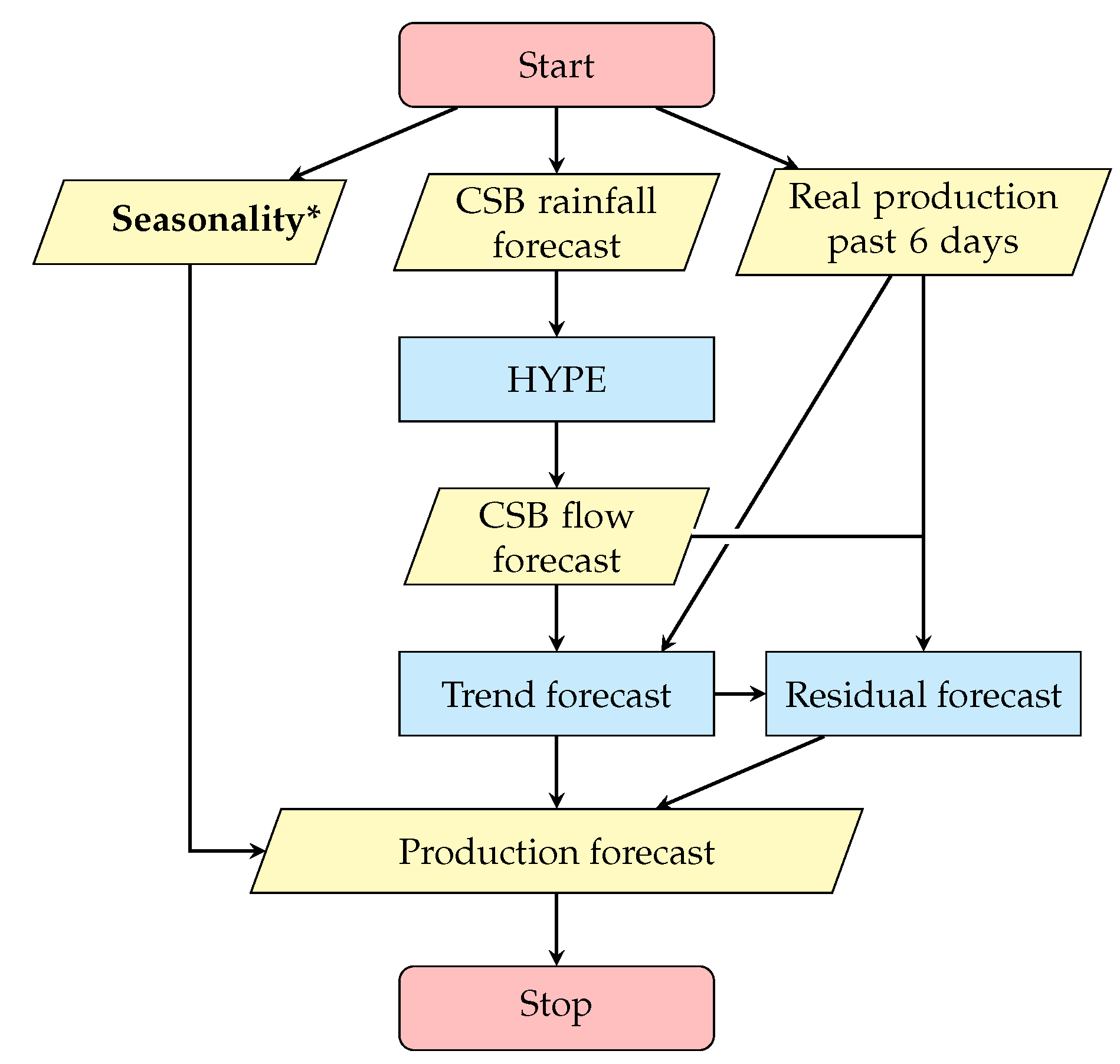 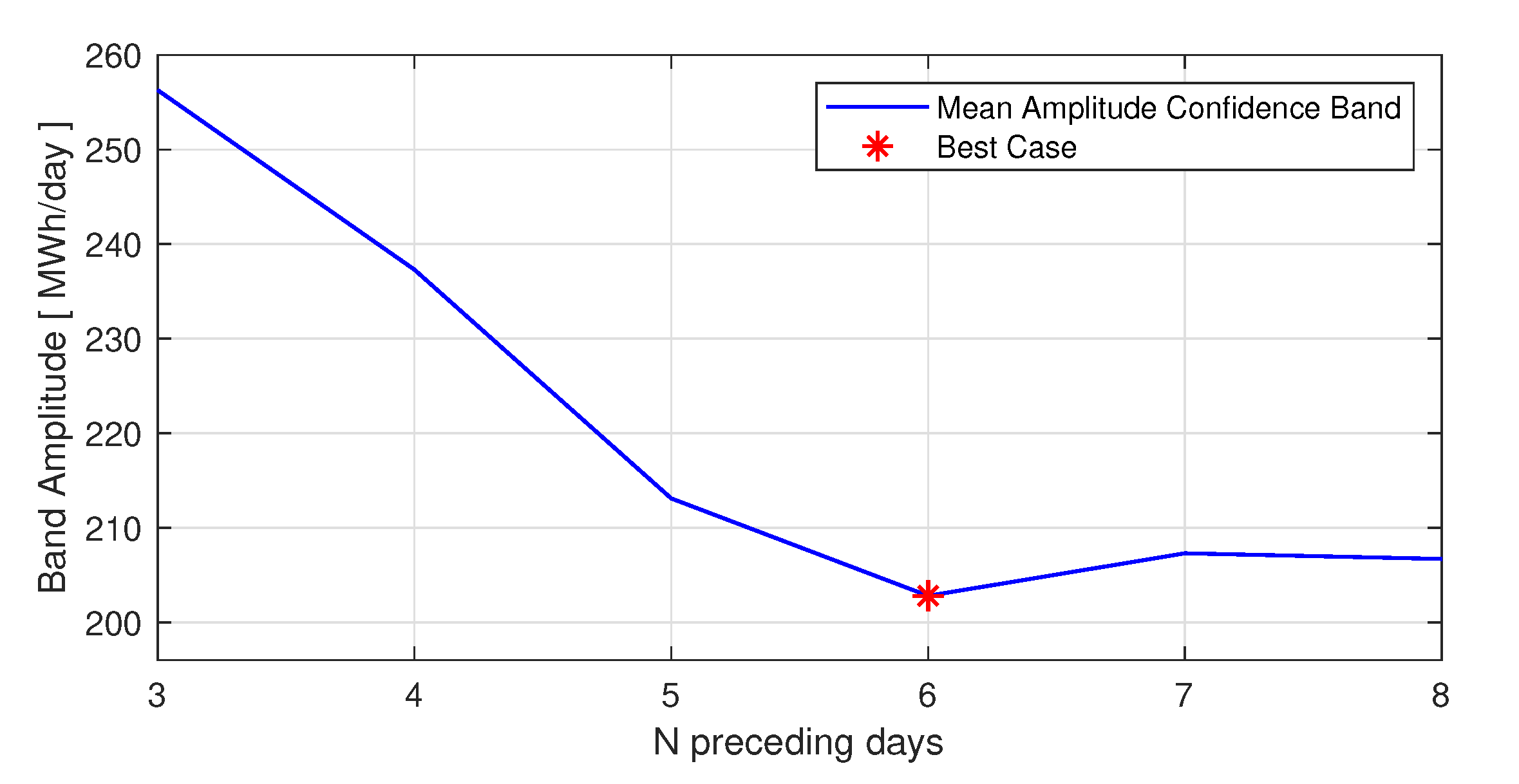 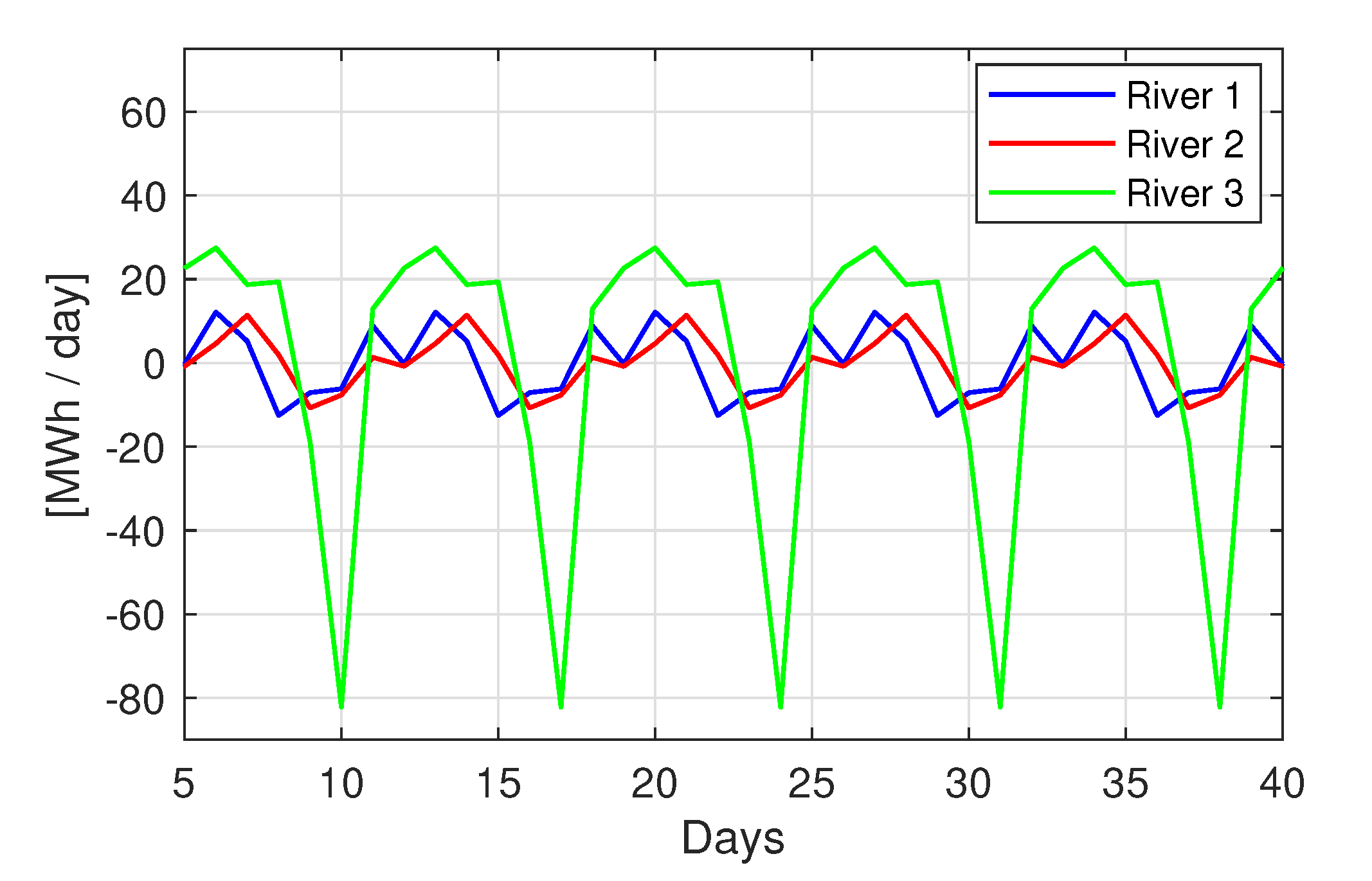 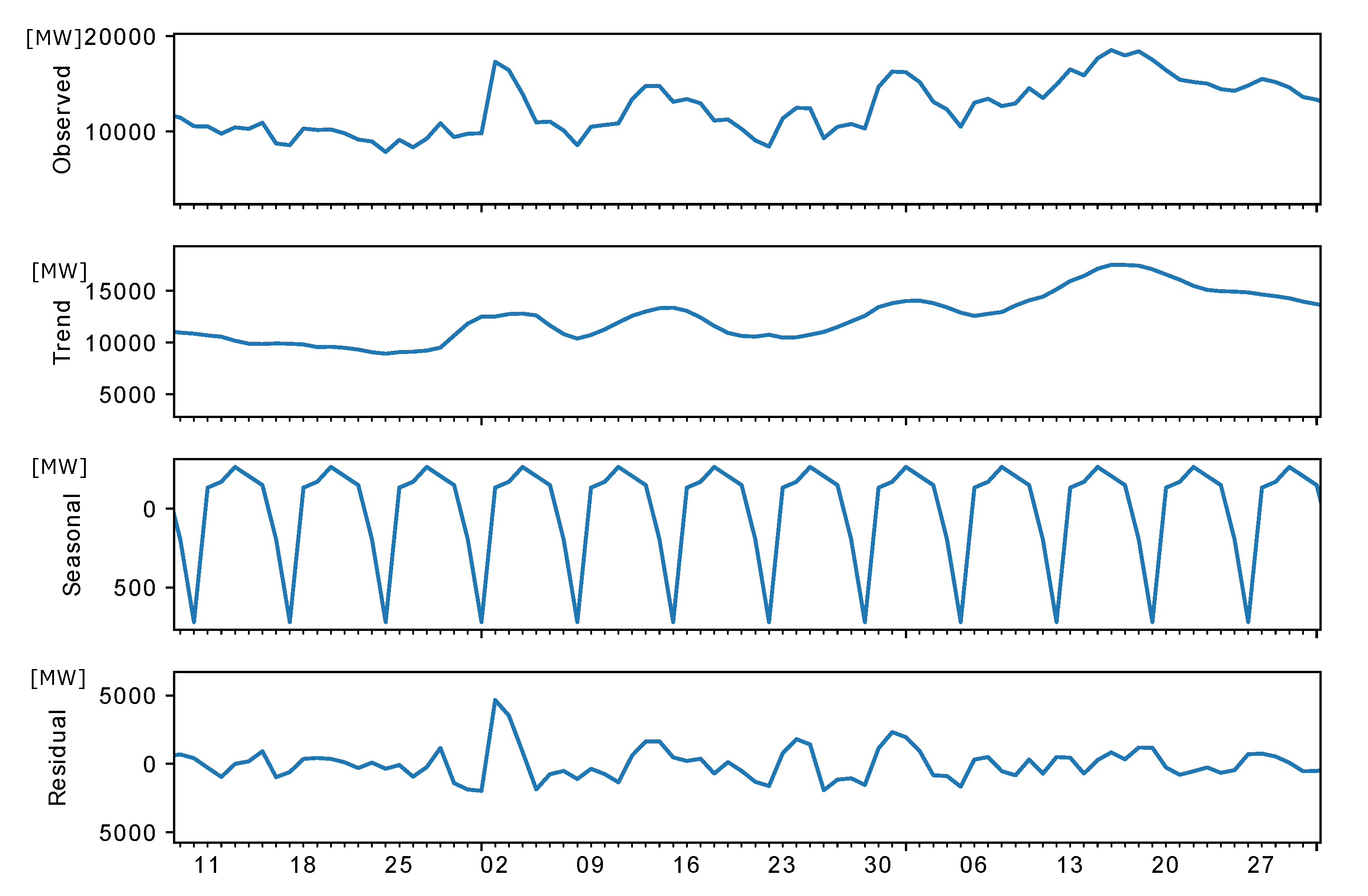 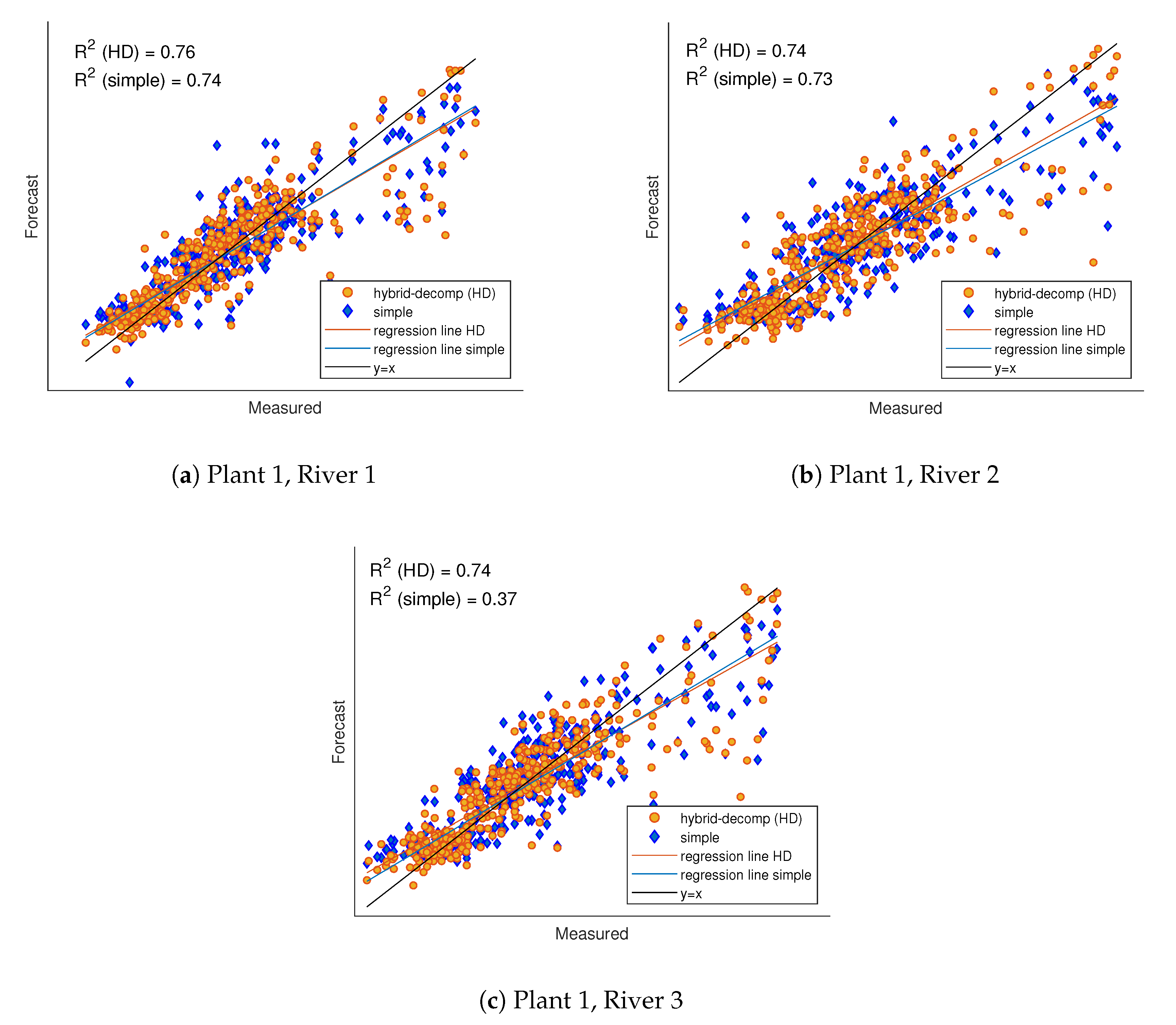