Hox Gene Collinearity (HGC) is a fundamental property that controls the development of many animal species, including vertebrates. In the Hox gene clusters, the genes are located in a sequential order Hox1, Hox2, Hox3, etc., along the 3’ to 5’ direction of the cluster in the chromosome. During Hox cluster activation, the Hox genes are expressed sequentially in the ontogenetic units D1, D2, D3, etc., along the anterior–posterior axis (A-P) of the early embryo. This collinearity, first observed by E.B. Lewis, is surprising because the spatial collinearity of these structures (Hox clusters and embryos) correlates entities that differ by about four orders of magnitude. Biomolecular mechanisms alone cannot explain such correlations. Long-range physical interactions, such as diffusion or electric attractions, should be involved. A biophysical model (BM) was formulated, which, in alignment with the biomolecular processes, successfully describes the existing vertebrate genetic engineering data. One hundred years ago, Emmy Noether made a fundamental discovery in mathematics and physics. She proved, rigorously, that a physical system obeying a symmetry law (e.g., rotations or self-similarity) is followed by a conserved physical quantity. It is argued here that HGC obeys a ‘primitive’ self-similarity symmetry. In this case, the associated primitive conserved quantity is the irreversibly increasing ‘ratchet’-like Hoxgene ordering where some genes may be missing. The genes of a vertebrate Hox clusterare located along a finite straight line. The same order follows the ontogenetic unitsof the vertebrate embryo. Therefore, HGC is a manifestation of a primitive Noether Theory (NT). NT may be applied to other than the vertebrate case, for instance, to animals with a circular topological symmetry. For example, the observed abnormal Hox gene ordering of the echinoderm Hox clusters may be reproduced by a double-strand break of the circular Hox gene ordering and its subsequent incorporation in the flanking chromosome. View Full-Text
Keywords: Hox gene collinearity; vertebrate Hox cluster; anterior–posterior axis; embryonic rotational symmetry; sea urchin Hox gene collinearity; vertebrate Hox cluster; anterior–posterior axis; embryonic rotational symmetry; sea urchin
►▼ Show Figures 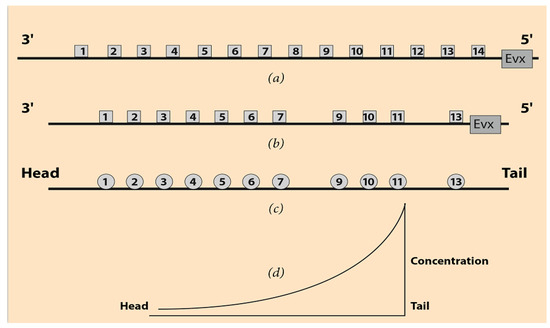