Sharing Multiple Perspectives on Burning: Towards a Participatory and Intercultural Fire Management Policy in Venezuela, Brazil, and Guyana
Previous Article in Journal

The Effect of Surface Fire in Savannah Systems in the Kruger National Park (KNP), South Africa, on the Backscatter of C-Band Sentinel-1 Images

The study area covers 14,000 km2 in northern Minnesota, USA (Figure 1) and encompasses the Boundary Waters Canoe Area (BWCA). Elevation ranges from 337 to 701 m above mean sea-level. Pleistocene glacial till formed much of the soil structure in the BWCA with mineral soil conditions ranging from granitic deposits to sandy loams [11]. Because it is located in a transition zone between deciduous hardwoods and true northern boreal forests, the vegetation and biophysical characteristics of the BWCA are diverse. Conifers and deciduous tree species exist along a spectrum between pure and mixed stands of pines (Red, White, Jack), Balsam fir, Quaking aspen, Northern white cedar, maple (Red and Sugar), birch (Paper, Yellow), and spruce (White and Black). Recent fire history (1984–present) has included multiple large-scale events affecting a total of over 900 km2 of forested land in the BWCA and adjacent communities.

Fuels data for CBH and age were collected at 263 inventory plots during an earlier, smaller pilot study area during the summers of 2014 and 2015 near a section of the Gunflint Trail. Plot locations were originally located using a stratified random sampling design, where strata were defined by forest types and stand age classes. These classes were composed of tree species commonly found across the greater extent of the BWCA, including: Jack, Red, and White pine, Black Spruce, Balsam fir, Paper birch, Quaking aspen. Plot locations were randomized within known forest stands >30 years old and >4.05 ha (10 acres). No plots were allowed within 24 m (80 ft) of a stand boundary or another plot. Forest inventory crews installed 0.04 ha (1/10th acre) fixed-radius forest inventory plots and recorded standard forest inventory data (i.e., individual tree measurements of species, height, and DBH) and additional plot-level measurements of stand age and canopy base height. Plots were located on the ground using handheld Trimble Juno GPS devices and differentially corrected to enhance the accuracy (2 to 5 m) of final plot locations. For this study, stand age was determined by selecting and coring the oldest tree from the dominant species present on each plot. CBH was assessed by two separate metrics: crown fuel base height (CFBH) and live crown base height (LCBH). Though these metrics subject to varying methodologies in other data collections, CFBH was here measured as the of height above the ground of the lowest live and/or dead fuels that can move fire higher in the tree. LCBH was determined by measuring the height above ground to the base of the live crown.
For CBD, a separate sample of 60 inventory plots were surveyed in 2015 and 2016. These plots were randomly located within the study area but within 2 km of a paved road and within a forested area. Plots were located on the ground using handheld Trimble GeoXT GPS devices and differentially corrected. At each plot, field crews recorded average canopy gap fraction (CGF), average and total species basal area, and average canopy height. A LAI-2200C instrument (LI-COR Biosciences, Lincoln, NE) was used to record CGF in a square 3 × 3 grid of nine points arranged around the plot center, each separated by five meters, following Reference [58]. With the LAI-2200C, a 38° angle was used with average canopy height to determine the respective CGF plot radius. Within this CGF-defined circular plot area, all conifers species >15 cm DBH were measured for height, height to first live branch, and canopy diameter. These data were used with published allometry [59] to calculate component biomass estimates for each field plot (i.e., needles, branch, and bole). The variety and detail of these measurements (i.e., biomass, CGF) allowed for the use and comparison of five CBD estimation methods (Table 1). These methods provide only indirect estimates and none are universally applicable to every forest type. Therefore, to determine the most appropriate CBD estimation method, only the most accurate of the five different methods tested was retained by comparing R2 and RMSE values.

Discrete-return LiDAR data used in the study was collected 14 May to 1 June 2011 by Woolpert, Inc. under contract from the State of Minnesota as a part of the Minnesota Elevation Mapping Project (MEMP). The expected outcome of the MEMP was the development of a state-wide, high-accuracy surface elevation dataset with possible vegetation mapping applications left unexplored. Horizontal positional accuracy of the dataset is ±1.6 m (α = 0.05) and vertical positional accuracy is 3.6 cm (α = 0.05) with a variable pulse return rate (depending on intercepted vegetation and topography), minimum side-lap of 25% and a scan angle of ± 20° off nadir [60]. The average density of the LiDAR point cloud is 0.44 pts/m2.
To characterize the horizontal and vertical distribution of vegetation a suite of raster grid metrics were created from the LiDAR point cloud data (Table 2) using the FUSION software package [61] at a 10 m spatial resolution. Due to the narrow side lap in the flight path and large scan angle, all potential predictors from FUSION metrics were visually screened for data quality issues before inclusion in the final predictor list. For example, canopy cover layers derived by FUSION due to excessive striping between flight lines and were replaced by a Landsat time-series derived canopy cover product [62]. For this replacement data, spectral indices were harmonized across all Landsat sensors along with photo-interpreted samples of canopy cover to produce annual maps of predicted canopy cover across the state from 1973–2015 [62]. The map of canopy cover for 2011 was chosen for use in all models to best match the year of LiDAR data collection. Finally, to synchronize predictor spatial resolutions, the Landsat-derived product was resampled from 30 m to a 10 m spatial resolution.

A randomForest [63] k-nearest neighbor imputation approach (RF-kNN), available in the “yaImpute” R package [64], was used to develop models of four canopy fuel attributes: stand age, CFBH, LCBH, and CBD. RF-kNN is different from other imputation methods because it identifies nearest neighbor distances based on proximity values generated from an initial RF model [36]. Furthermore, comparative studies of nearest neighbor methods have shown RF-kNN to be a preferable modeling approach when predicting forest attributes [36,65,66,67,68,69,70].
Following previous work [42], model parsimony was optimized during the implementation of the RF-kNN approach to maximize the ecological interpretability of the model results. First, using the ‘rfUtilities’ package in R [71], a Gram–Schmidt QR decomposition was performed to identify and remove multicollinear variables. Next, to generate parsimonious RF models, an iterative selection function was performed using the ‘modelSel’ function in the ‘rfUtilities’ package [72]. This function generates a Model Improvement Ratio (MIR) statistic that describes how well predictor variables minimize the mean squared error and maximize the variation explained in the response. The RF model generating the highest MIR values is then identified as the most parsimonious model.
Using parsimony optimized predictor sets and associated RF proximity values, k-nearest neighbor imputations were run to generate predicted values to compare against the training data for LCBH, CFBH, CBD, and stand age. For the imputations, the number of neighbors was set to k = 1, a value understood to preserve the distribution and covariance structure of the reference dataset [73] and restrict the range of possible imputed values to that of the field data [36]. Canopy fuel attributes were then imputed across the study area at a 10 m spatial resolution.

The performance of each model was assessed by comparing imputed predictions to observed values in the training dataset and evaluating accuracy using an adjusted coefficient of determination (Adj. R2) and root mean square error (RMSE). The five methods of estimating CBD were analyzed and the method that produced the highest R2 and lowest RMSE value was retained as the final CBD model.
The influence of individual predictors in each model were analyzed in two ways. First, internal RF variable importance was generated to measure the mean decrease in model accuracy. Second, partial dependence plots were generated for the most important predictors in each model. In the context of RF modeling, partial dependence plots represent an attempt to visualize the relationship between the response variable and the marginal effect of a single predictor while accounting for the average effect of all other predictors used to grow the forest of regression trees [74,75].

This study demonstrates that low-density LiDAR can be used to provide reasonable estimates of canopy fuel attributes in the mixed forest ecosystem of northern Minnesota, USA. The results also highlight the use of pre-existing low-density LiDAR collections to complement the limited resources of forest managers to gather plot-based field data. The map products of imputed canopy fuel attributes produced by this study are of higher spatial resolution (10 m) relative to similar products from national data repositories, such as LANDFIRE. They can serve as alternative or improved inputs for forest managers in comparative model scenarios of fire behavior and risk. It is encouraging that the data limitations of low-density LiDAR were generally not a major hindrance to model accuracy. These results indicate the expanded utility of low-density LiDAR and suggest re-evaluations of the large number of similar datasets available across the United States.

This research was funded by the US Forest Service Superior National Forest.

The authors would like to acknowledge Steve Filippelli for his expertise with LiDAR and geospatial programming. 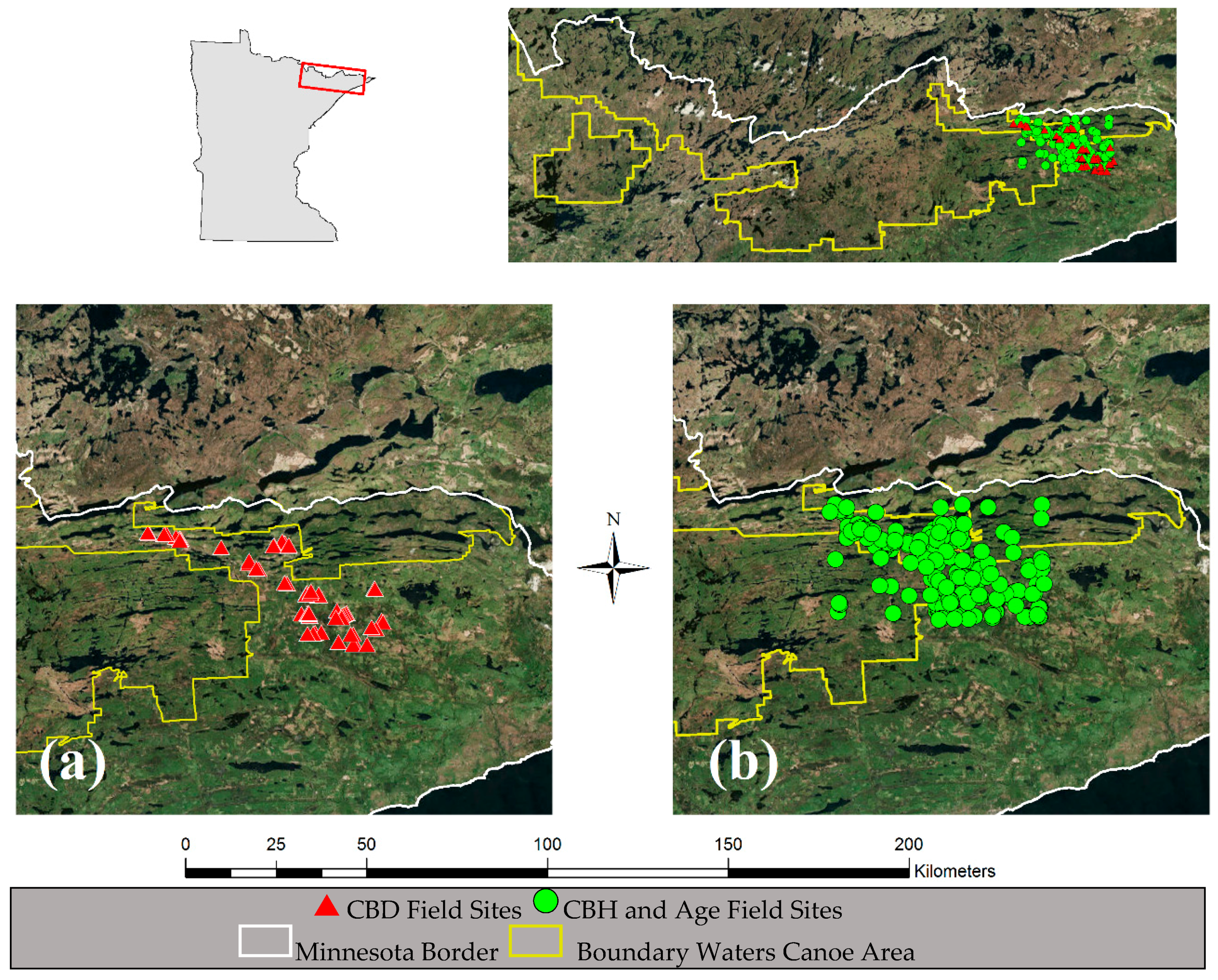 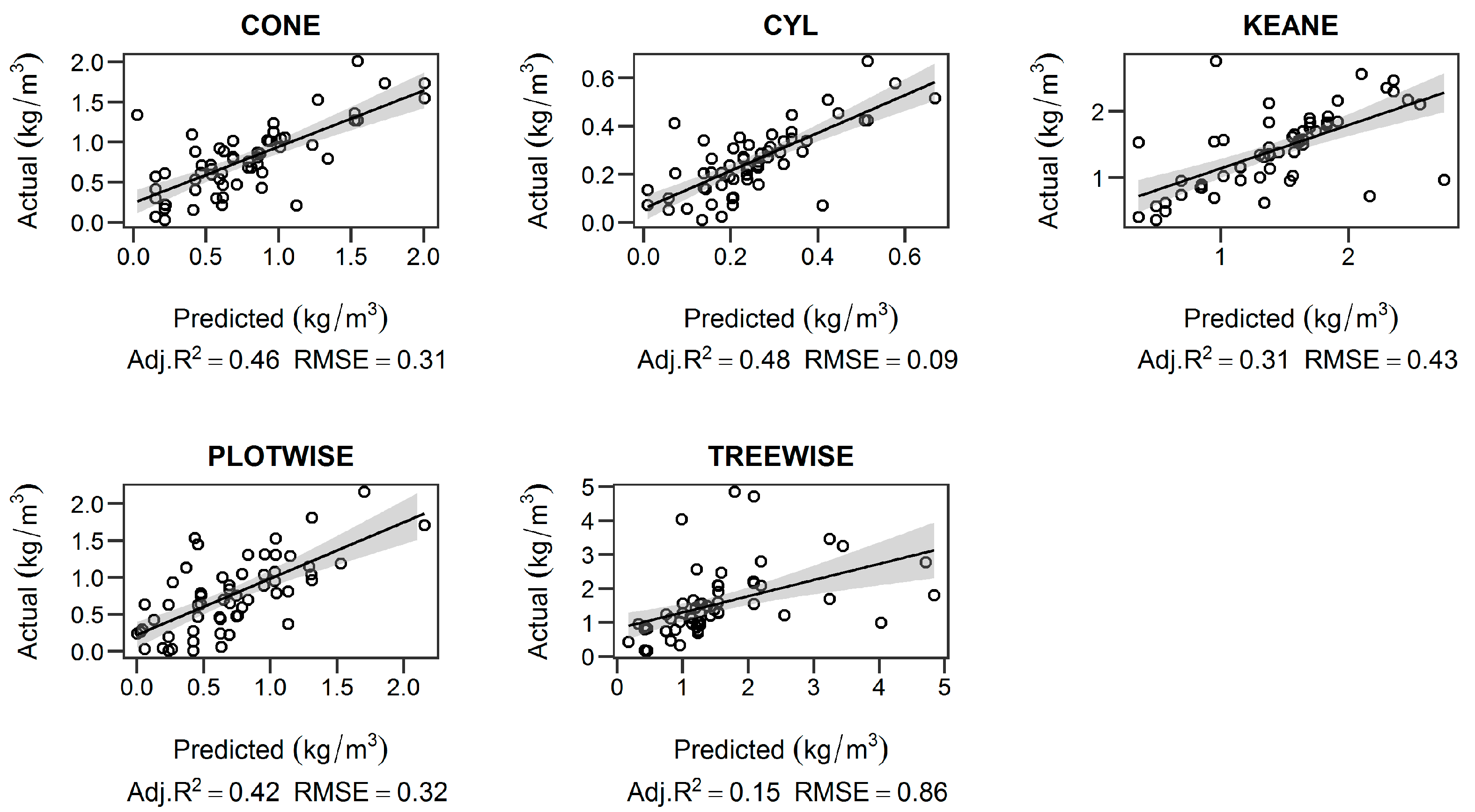