Ignition of A Plasma Discharge Inside An Electrodeless Chamber: Methods and Characteristics

The spatially-resolved electron temperature, rotational temperature, and number density of the two metastable Ar levels were investigated in a miniature RF Ar glow discharge jet at atmospheric pressure. The level population densities were determined from optical absorption spectroscopy (OAS) measurements assuming a Voigt profile for the plasma emission and a Gaussian profile for the lamp emission. As for the electron temperature, it was deduced from the comparison of the measured Ar emission lines with those simulated using a collisional-radiative model. The Ar level population higher than 10 m and electron temperature around 2.5 eV were obtained close to the nozzle exit. In addition, both values decreased steadily along the discharge axis. Rotational temperatures determined from OH(A) and N(C) optical emission featured a large difference with the gas temperature found from a thermocouple; a feature ascribed to the population of emitting OH and N states by energy transfer reactions involving the Ar levels. View Full-Text
Keywords: atmospheric pressure plasma jet; optical emission spectroscopy; optical absorption spectroscopy; collisional-radiative model atmospheric pressure plasma jet; optical emission spectroscopy; optical absorption spectroscopy; collisional-radiative model
►▼ Show Figures 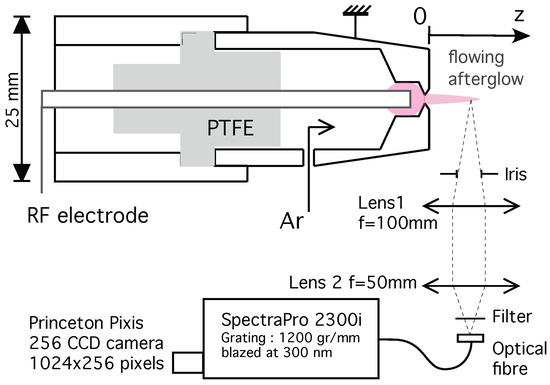