Gyroton with the Corrugated Resonator
Previous Article in Journal

2. Effect of Plasma on the Growth of Soybean Sprouts

Application of non-thermal plasma technology in the seed treatment is being a modern eco-agricultural high-tech technique which can stimulate seed germination and plant growth for promoting grain yields [23,25,26,27,28,29,30]. Recently, the hot spots in the research of plasma biological engineering are to cultivate plasma treating seeds by modifying the material surface and activating seeds to improve the quality and production of various crops [23,28,29,31,32]. The plasma treating seeds technology imitates the space ionosphere state to expose seed to gas ions, magnetic fields, rays, vacuum, etc., whose joint action activates the seed physiological activity and their potential anti-stress gene expression including drought, cold, and other stress resistance [23,26,31,33,34]. However, multi-generation experiments of plasma treating seeds suggest that long-term memory of plasma irradiation is engraved in seeds of the next generation with little gene mutation [35].
Atmospheric DBD plasma irradiation enhances the growth of radish sprouts [29], the seed germination rate and seedling growth of spinach by elevating gibberellin hormone and amylolytic enzyme-related gene expression [36], and the seed germination, growth parameters and yields of tomato because active particles and ultraviolet can penetrate into the capsule of seeds, resulting in the reduction of relative penetrability of cell velum and the improvement of root activities [37]. The appropriate non-thermal plasma exposure can increase seed germination, seedling growth, length of sprouts, activation of photosynthesis, and resistance to adversity, resulting in significant improvements in the quality and yield of crops [23,26,28,29,31,32,33]. However, different input power and duration of plasma exposure determine different influences on the plant growth properties. Low doses of plasma treatment significantly increase the seed germination, seedling growth, and the length and weight of sprouts, whereas high doses inhibit these growth parameters [23,38,39]. Therefore, the non-thermal plasma treatment condition for promoting plant growth should be optimized.
Soybean sprout is a common and basic culinary vegetable rich in nutrients and with simple culturing method in the Eastern Asian countries. The quality and yield of soybean sprouts are dependent on seed germination and vigour. The decrease of growth period and the increase of the quality and yield of soybean sprouts are crucial issues with considerable economic benefits for farmers. Ling et al. [28] found cold plasma treatments had stimulatory effects on soybean seed germination and seedling growth through improving seed’s water uptake and decreasing apparent contact angle. Our laboratory also has found that the seed germination and growth features of soybean sprouts were ameliorated by non-thermal DBD plasma exposure at an optimized condition. The result showed that exposure at 22.1 kV of plasma for 12 s exhibited the highest seed germination and production rates (significant increases of 0.15- and 0.67-fold, respectively, compared to the control) and the maximum growth of soybean sprouts (including the weight, stem and root lengths, with significant increases of 0.39-, 0.79-, and 0.88-fold, respectively, compared to the control) [17]. Figure 1a–c showed a representative 6-day-old soybean sprout appearance treated with different conditions of plasma. The statistically validity and significance between plasma-treated groups and control group were reported in detail in the study of Zhang et al. [17]. The sprout growth-promoting effect of plasma-treated soybean seeds was found to be mediated by increases in the soluble protein level which improves water retention capacity and imbibition [28,31], antioxidant enzyme activity which markedly improves active oxygen metabolism level for the acceleration of seed germination [40], gene expression of adenosine triphosphate (ATP) which promotes the germination and growth of sprouts [40,41], target of rapamycin which increases root and shoot growth, cell size, and seed yield without visibly affecting plant morphology [42], and growth-regulating factor which plays important roles in regulating plant growth and development [43] in the stems and roots [17]. The technique of non-thermal DBD plasma-treated seeds adds an additional value and serves as an efficient approach to promote the growth of soybean sprouts. However, no genetic mutations in plasma-treated soybean seeds were claimed in this study, which need further investigations on mutagenicity and genotoxic effects on the next generation.

Fertility is a trait of major interest in the poultry industry because it determines the profitability of production. Chicken sperm quality influences the male fertility and the hatchability of fertilized eggs [89], which are the ultimate objective of poultry breeder management. Spermatozoa are highly specialized cells which require high ATP level for providing the energy to ensure motility and fertilization potential [90]. The numerous mitochondria in the intermediate piece of chicken sperm provide the energy for flagellum movement to reach the fertilization site in the infundibulum [91]. Sperm quality and fertility also require ROS homeostasis between generation and scavenging activity [92]. Low and physiological concentrations of ROS stimulate sperm capacitation and acrosome reaction to ensure fertilization [89,93], but high concentrations of ROS lead to sperm DNA damage, impaired acrosome integrity, and decreased motility, viability, and fertilization capacity [92,94,95]. Zhang et al. [21] reported that the appropriate treatment condition of non-thermal DBD plasma increased the chicken sperm motility in vitro by controlling the ROS balance and increasing the ATP level and respiratory enzyme activity in the mitochondria; this resulted from the regulation of the demethylation levels of genes involved in antioxidant defense and energetic metabolism [21]. Sperm DNA methylation levels are associated with sperm motility, but not with sperm viability or morphology [96]. However, hypermethylation results in impaired sperm morphology [97], low sperm motility [98,99], infertility [100], and even sperm apoptosis [101]. In addition, the reproductive performance in 40-week-old male chickens which were hatched from non-thermal DBD plasma-treated fertilized eggs was investigated and the results showed that plasma treatment significantly increased serum testosterone level, sperm count, motility, and total fertility in male chickens [20]. Therefore, the plasma technique might be applied to elevate male fertility in poultry breeding.

Taken together, this review suggests an applicative technique that an optimal non-thermal DBD plasma technique could be applied on soybean seeds and chicken embryos as a safe and valuable approach for promoting soybean sprout growth, chicken embryonic development and postnatal growth, and even male chicken fertility, which are beneficial to improving plant and poultry productivity.

This research was financially supported by the Ministry of Trade, Industry, and Energy (MOTIE), Korea, under the “Regional Specialized Industry Development Program (R&D, P0002062)” supervised by the Korea Institute for Advancement of Technology (KIAT).

This research was supported by the R&D Program of “Plasma Advanced Technology for Agriculture and Food (Plasma Farming)” through the National Fusion Research Institute of Korea (NFRI). The authors would like to thank the China Scholarship Council for providing Jiao Jiao Zhang with a scholarship. 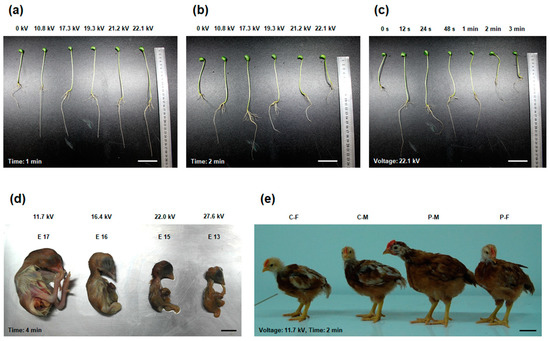