A Tale of Maize, Palm, and Pine: Changing Socio-Ecological Interactions from Pre-Classic Maya to the Present Day in Belize

The environmental impact of the ancient Maya, and subsequent ecological recovery following the Terminal Classic decline, have been the key foci of research into socio-ecological interactions in the Yucatán peninsula. These foci, however, belie the complex pattern of resource exploitation and agriculture associated with post-Classic Maya societies and European colonisation. We present a high-resolution, 1200-year record of pollen and charcoal data from a 52-cm short core extracted from New River Lagoon, near to the European settlement of Indian Church, northern Belize. This study complements and extends a previous 3500-year reconstruction of past environmental change, located 1-km north of the new record and adjacent to the ancient Maya site of Lamanai. This current study shows a mixed crop production and palm agroforestry management strategy of the ancient Maya, which corroborates previous evidence at Lamanai. Comparison of the two records suggests that core agricultural and agroforestry activities shifted southwards, away from the centre of Lamanai, beginning at the post-Classic period. The new record also demonstrates that significant changes in land-use were not associated with drought at the Terminal Classic (ca. CE 1000) or the European Encounter (ca. CE 1500), but instead resulted from social and cultural change in the post-Classic period (CE 1200) and new economies associated with the British timber trade (CE 1680). The changes in land-use documented in two adjacent records from the New River Lagoon underline the need to reconstruct human–environment interactions using multiple, spatially, and temporally diverse records. View Full-Text
Keywords: human–environment interactions; ancient Maya; European Colonisation; Belize; palaeoecology; pollen; charcoal; agriculture; land-use change human–environment interactions; ancient Maya; European Colonisation; Belize; palaeoecology; pollen; charcoal; agriculture; land-use change
►▼ Show Figures 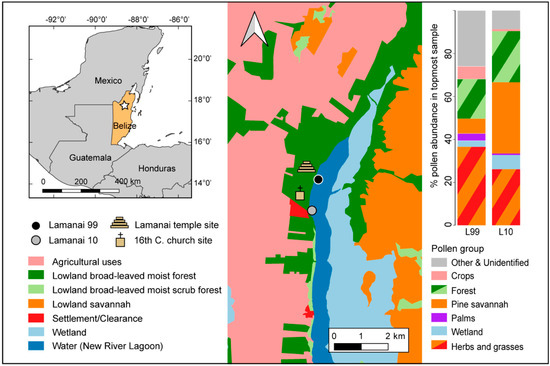