A Tale of Maize, Palm, and Pine: Changing Socio-Ecological Interactions from Pre-Classic Maya to the Present Day in Belize
Previous Article in Journal

Alternative Adaptation Strategy during the Paleolithic–Neolithic Transition: Potential Use of Aquatic Resources in the Western Middle Yangtze Valley, China

Results of five climate model simulation studies on the Younger Dryas cold event (YD) are compared with a focus on temperature and precipitation. Relative to the Bølling-Allerød interstadial (BA), the simulations show consistent annual cooling in Europe, Greenland, Alaska, North Africa and over the North Atlantic Ocean and Nordic Seas with maximum reduction of temperatures being simulated over the oceans, ranging from −25 °C to −6 °C. Warmer conditions were simulated in the interior of North America. In two experiments, the mid-to-high latitudes of the Southern Hemisphere were also warmer, associated with a strong bi-polar seesaw mechanism in response to a collapse of the Atlantic meridional overturning circulation (AMOC). The modelled YD-BA temperature response was in general agreement with proxy-based evidence. The simulations reveal reduced YD-BA precipitation (up to 150 mm yr−1) over all regions with major cooling, and over the northern equatorial region. South of the equator, modelled precipitation seemed to increase due to a southward shift of the InterTropical Convergence Zone (ITCZ). The largest uncertainty in the YD is the high-latitude response, where the models show diverging results. This disagreement is partly related to uncertainties in the freshwater forcing. Most model studies assume an AMOC shutdown, but this is incompatible with proxy evidence. View Full-Text
Keywords: Younger Dryas; climate modelling; abrupt climate change; model comparison Younger Dryas; climate modelling; abrupt climate change; model comparison
►▼ Show Figures 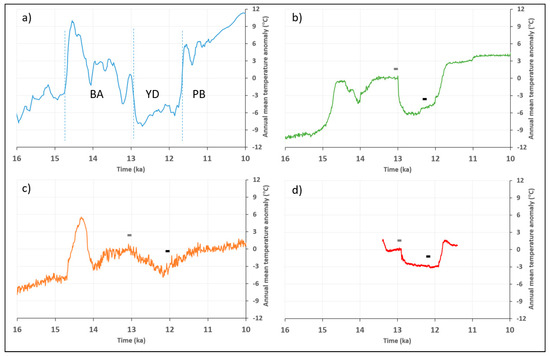