Mammoths, Deer, and a Dog: Fossil and (Sub) Recent Allochthonous Remains from the Northeastern Croatia (Podravina Region), with the First Radiocarbon Dating of the Croatian Woolly Mammoths (Mammuthus primigenius)

Recently collected fossil material in the Villafranchian locality of Sésklo, as well as a re-evaluation of a pre-existing, partly-published museum collection, allow the recognition of a lower faunal level in the locality, older than the main Equus-dominated fossil assemblage, dated in the Early Pleistocene (MNQ17). The lower level yielded, instead, an advanced hipparion, referred to the species Plesiohipparion cf. shanxiense, and a small number of associated taxa: an ostrich (Struthio cf. chersonensis), an unidentified proboscidean, the pig Sus arvernensis, two antelopes (Gazella cf. bouvrainae and Gazellospira torticornis), a large bovid (Bovini indet.), and a rhinoceros (Stephanorhinus sp.). The lower-level fauna is dated in the latest Pliocene (MN16) and indicates a rather open and dry palaeoenvironment. The faunal sequence in Sésklo shows that the hipparion did not co-occur with the stenonid horse, at least in this region. Previous reports on sympatry of these taxa may result from faunal mixing, requiring re-examination of the available samples. View Full-Text
Keywords: Plesiohipparion; Late Pliocene; Villafranchian; Greece; biostratigraphy; equid sympatry Plesiohipparion; Late Pliocene; Villafranchian; Greece; biostratigraphy; equid sympatry
►▼ Show Figures 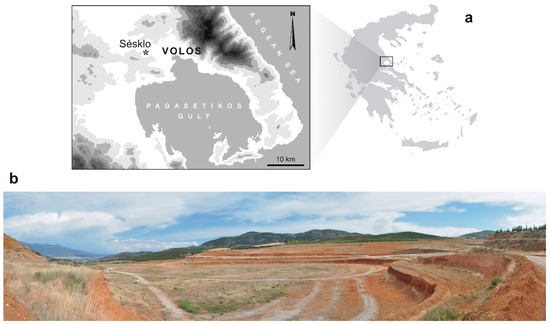 Athanassiou, A. A Villafranchian Hipparion-Bearing Mammal Fauna from Sésklo (E. Thessaly, Greece): Implications for the Question of Hipparion–Equus Sympatry in Europe. Quaternary 2018, 1, 12.


Athanassiou A. A Villafranchian Hipparion-Bearing Mammal Fauna from Sésklo (E. Thessaly, Greece): Implications for the Question of Hipparion–Equus Sympatry in Europe. Quaternary. 2018; 1(2):12.


Athanassiou, Athanassios. 2018. "A Villafranchian Hipparion-Bearing Mammal Fauna from Sésklo (E. Thessaly, Greece): Implications for the Question of Hipparion–Equus Sympatry in Europe." Quaternary 1, no. 2: 12.