For the preparation of Si-C composite anode for Li-ion battery, Figure 1 shows the schematic diagram of CR2030-type coin cells. The mesocarbon microbeads (MCMB) graphite powders were mixed with two conducting media (Super-P carbon black and KS-4 synthetic graphite) and a binder (polyvinylidene fluoride, PVDF) as the weight ratio of 80:5:5:10 in N-Methyl-2-pyrrolidone (NMP) solvent. The mixture was stirred by a ball mill for 12 h to prepare the uniform electrode slurry. Then, the electrode slurry was pasted on a 10 μm-thick copper foil substrate by using a doctor blade, and put in a blow dryer to evaporate the solvent. The prepared anode sheets were dried at 135 °C in a vacuum oven for 12 h. After cooling to room temperature, the sheets were pressed under a pressure of approximately 200 kg·cm−2 to regulate the thickness of electrode layers about 100 μm. Finally, the a-Si layer had been deposited on the electrode sheets by the PECVD technique. For the PECVD process, the parameters were SiH4 as precursor gas with flux 28 sccm, the power 90 W, the pressure 0.64 torr, and the temperature of 200 °C. In this work, three different thicknesses (320, 640 and 960 nm) of a-Si layers were deposited on carbon anodes at the deposition rate of 40 nm/min. The thickness of a-Si layers was identified on the Si wafers because of the rough carbon electrode. To characterize the a-Si/C compostite anodes, we employed scanning electron microscopy (SEM) for the surface morphology observation, electron probe micro-analysis (EPMA) and Raman spectroscopy for the analysis of chemical composition.
For the electrochemical analysis, CR2032-type coin cells were used to measure electrochemical performance of one traditional carbon anode and three a-Si/C composite anodes. A lithium foil and a porous polypropylene film were served as the counter electrode and the separator, respectively. The electrolyte solution was 1.0 M LiPF6 in a mixture of ethylene carbonate, propylene carbonate, and dimethyl carbonate with a weight ratio of 1:1:1. The coin cells were assembled in an atmosphere controlled glove box. The charge/discharge cycling test at different C rates (from 0.1 to 5 C) was conducted with the voltage from 0.01 to 1.2 V versus Li+/Li at the ambient temperature.

We proposed a new mass production-able and low-cost fabrication method of a-Si/C composite anode for Li-ion battery: traditional carbonaceous electrodes deposited a-Si layers by PECVD at low temperature. PECVD process is widely adopted in the solar panel industry because of its low cost advantage. This idea combines the advantage of carbon electrode in stability, reliability and mass production, as well as the merit of Si in high theoretical specific capacity. Small amounts a-Si on the rough surface of carbon electrodes can improve obviously the electrochemical performance of the carbon anode such as specific capacity and coulombic efficiency without much material consumption. For the a-Si deposition thickness of 960 nm, 42% of capacity can be improved due to only around 30 mg of a-Si deposited by PECVD. The more a-Si on the carbon electrode, the higher capacity of the anode we get. These depositions (320 nm, 640 nm and 960 nm) can avoid the pulverization issue of Si electrode for the Li-ion battery. Coulombic efficiencies of a-Si/C electrodes are very stable and greater than 85% after the first charge-discharge test. Capacitance retention ratio of a-Si/C electrodes can be maintained 96% at different C rates. Amorphous and flake like silicon allow free expansion during limitation and de-limitation, which makes better capacity retention and cycle life. The rough carbon electrodes also can provide the good adhesion and free expansion for a-Si layers, so a-Si/C composite anodes have better electrochemical performance than traditional carbonaceous electrodes. The carbon anode with a-Si layers by PECVD has high potential for the manufacture of Li-ion battery.

Conceptualization, C.-Y.L.; methodology, I.-S.Y.; data curation, F.-H.Y.; writing—original draft preparation, I.-S.Y., and C.-Y.L. All authors have read and agreed to the published version of the manuscript.

Authors acknowledge the researchers in Chun-Shan Institute of Science and Technology Po-Yen Chen and Bi-Sheng Jang for the help in experiment and discussion. 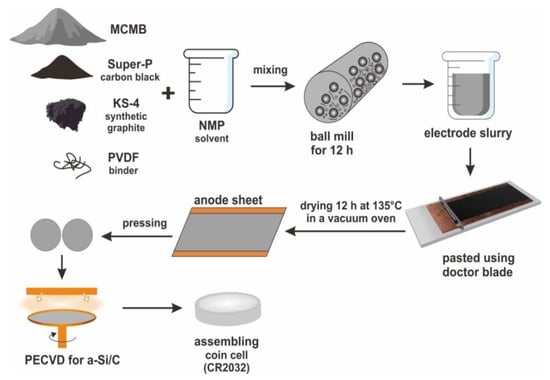 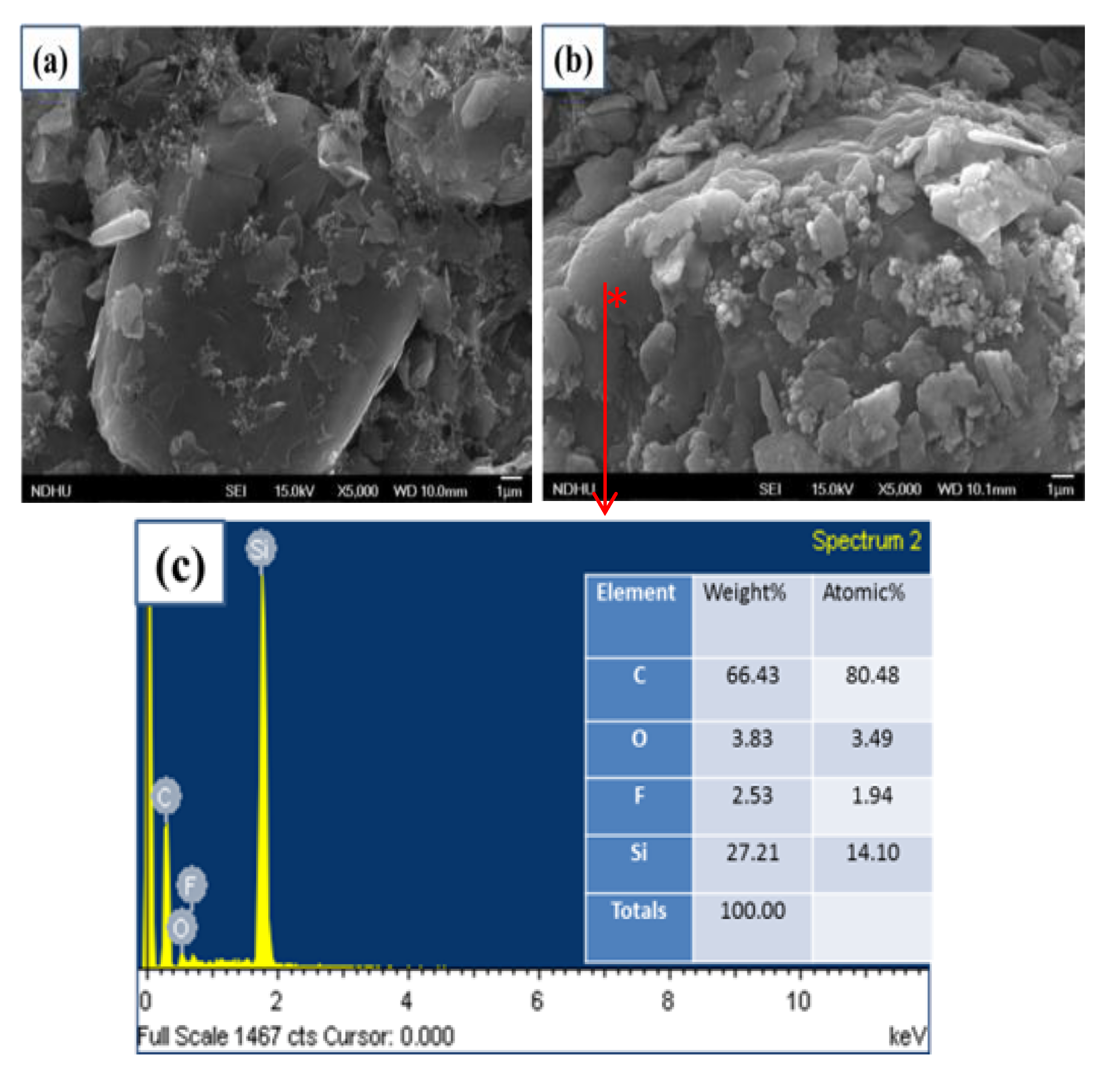 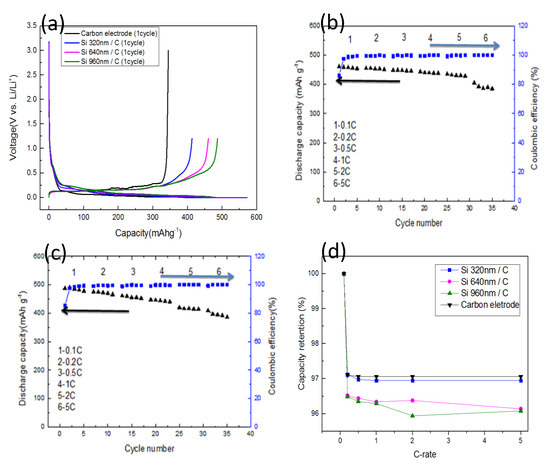 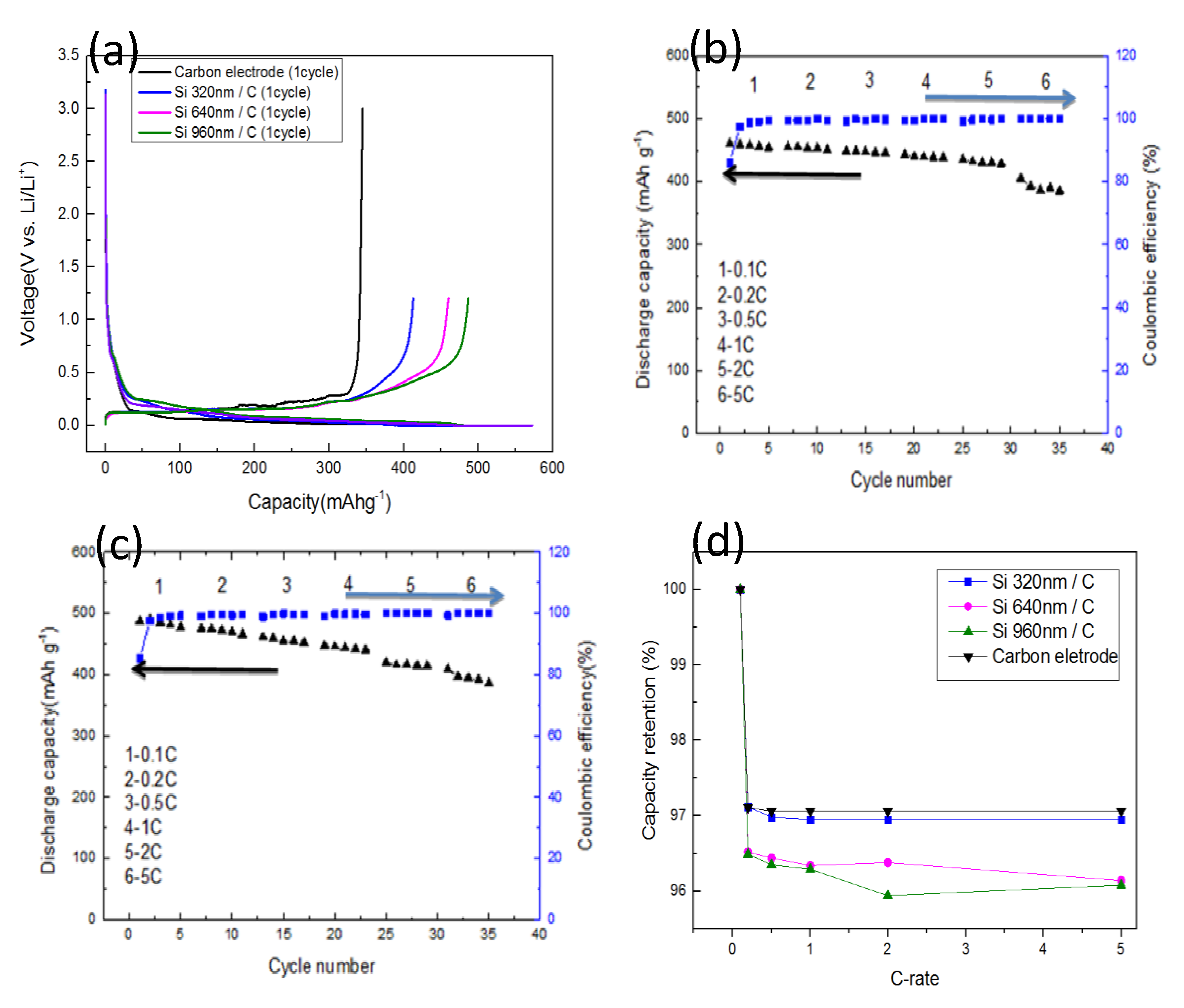 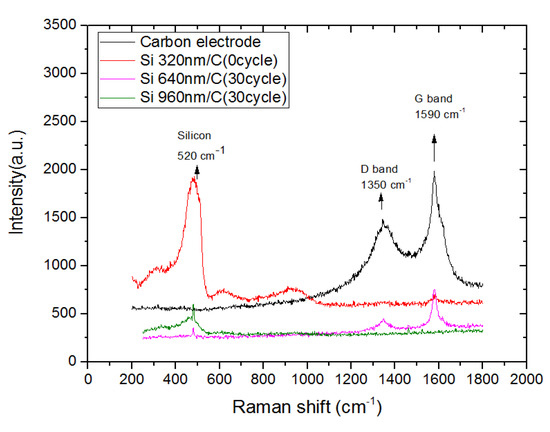