Does the Type of Polymer and Carbon Nanotube Structure Control the Electromagnetic Shielding in Melt-Mixed Polymer Nanocomposites?

This study describes the application of multi-walled carbon nanotubes that were nitrogen-doped during their synthesis (N-MWCNTs) in melt-mixed polypropylene (PP) composites. Different types of N-MWCNTs, synthesized using different methods, were used and compared. Four of the five MWCNT grades showed negative Seebeck coefficients (S), indicating n-type charge carrier behavior. All prepared composites (with a concentration between 2 and 7.5 wt% N-MWCNTs) also showed negative S values, which in most cases had a higher negative value than the corresponding nanotubes. The S values achieved were between 1.0 μV/K and −13.8 μV/K for the N-MWCNT buckypapers or powders and between −4.7 μV/K and −22.8 μV/K for the corresponding composites. With a higher content of N-MWCNTs, the increase in electrical conductivity led to increasing values of the power factor (PF) despite the unstable behavior of the Seebeck coefficient. The highest power factor was achieved with 4 wt% N-MWCNT, where a suitable combination of high electrical conductivity and acceptable Seebeck coefficient led to a PF value of 6.1 × 10−3 µW/(m·K2). First experiments have shown that transient absorption spectroscopy (TAS) is a useful tool to study the carrier transfer process in CNTs in composites and to correlate it with the Seebeck coefficient. View Full-Text
Keywords: polypropylene; nitrogen doping; carbon nanotube; thermoelectric polypropylene; nitrogen doping; carbon nanotube; thermoelectric
►▼ Show Figures 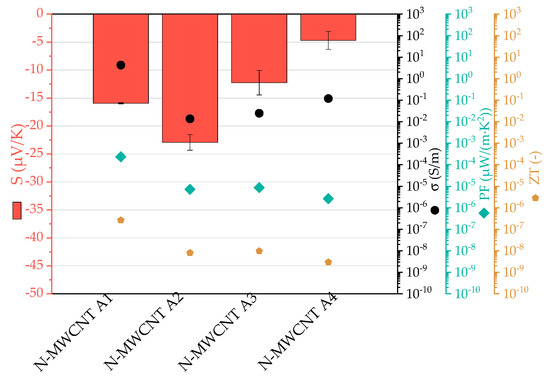