This research extensively investigates how to enhance the mechanical performance of Rubcrete, aiming to move this type of concrete from the laboratory research level to a more practical use by the concrete industry. The effects of many different mixing procedures, chemical pre-treatments on the rubber particles, and the use of fibre additives, have been investigated for their impact upon Rubcrete workability, compressive strength, tensile strength, and flexural strength. The mixing procedure variables included mixing time and mixing order. The rubber pre-treatments utilized chemicals such as Sodium Hydroxide (NaOH), Hydrogen Peroxide (H2O2), Sulphuric acid (H2SO4), Calcium Chloride (CaCl2), Potassium Permanganate (KMnO4), Sodium Bisulphite (NaHsO3), and Silane Coupling Agent. Soaking rubber particles in tap water, or running them through water before mixing, were also tried as a pre-treatment of rubber particles. In addition, the effects of fibre additives such as steel fibres, polypropylene fibres, and rubber fibres, were assessed. X-ray photoelectron spectroscopy (XPS) analysis was utilised to examine some of the pre-treated rubber particles. The results showed that doubling the net mixing time of all mix constituents together enhanced the Rubcrete slump by an average of 22%, and the compressive strength by up to 8%. Mixing rubber with dry cement before adding to the mix increased the compressive strength by up to 3%. Pre-treatment using water was more effective than other chemicals in enhancing the Rubcrete workability. Regardless of the treatment material type, the longer the time of the treatment, the more cleaning of rubber occurred. Significant Rubcrete flexural strength increase occurred when using 1.5% fibre content of both steel fibre and polypropylene fibre. View Full-Text
Keywords: rubberised concrete; rubcrete; rubber pre-treatment; rubcrete mixing procedures; fibre additives rubberised concrete; rubcrete; rubber pre-treatment; rubcrete mixing procedures; fibre additives
►▼ Show Figures 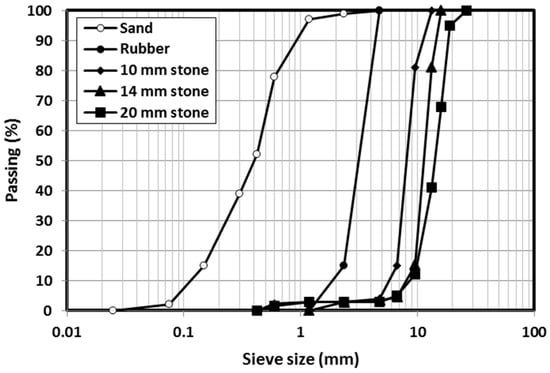