Food security is one of the burning issues in the 21st century, as a tremendous population growth over recent decades has increased demand for food production systems. However, agricultural production is constrained by the limited availability of arable land resources, whereas a significant part of these is already degraded due to overexploitation. In order to get optimum output from the available land resources, it is of prime importance that crops are monitored, analyzed, and mapped at various stages of growth so that the areas having underdeveloped/unhealthy plants can be treated appropriately as and when required. This type of monitoring can be performed using ultra-high-resolution earth observation data like the images captured through unmanned aerial vehicles (UAVs)/drones. The objective of this research is to estimate and analyze the above-ground biomass (AGB) of the wheat crop using a consumer-grade red-green-blue (RGB) camera mounted on a drone. AGB and yield of wheat were estimated from linear regression models involving plant height obtained from crop surface models (CSMs) derived from the images captured by the drone-mounted camera. This study estimated plant height in an integrated setting of UAV-derived images with a Mid-Western Terai topographic setting (67 to 300 m amsl) of Nepal. Plant height estimated from the drone images had an error of 5% to 11.9% with respect to direct field measurement. While R2 of 0.66 was found for AGB, that of 0.73 and 0.70 were found for spike and grain weights respectively. This statistical quality assurance contributes to crop yield estimation, and hence to develop efficient food security strategies using earth observation and geo-information. View Full-Text
Keywords: wheat; remote sensing; AGB; crop yield; estimation; crop monitoring; consumer drone; digital camera wheat; remote sensing; AGB; crop yield; estimation; crop monitoring; consumer drone; digital camera
►▼ Show Figures 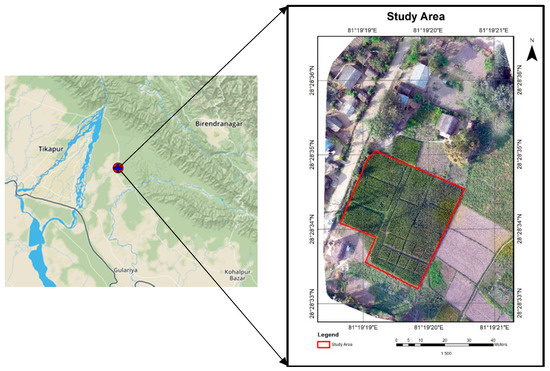