Fractional-Order Models for Biochemical Processes
Next Article in Special Issue

Biomaterials are primarily insulators. For nearly a century, electromagnetic resonance and antenna–receiver properties have been measured and extensively theoretically modeled. The dielectric constituents of biomaterials—if arranged in distinct symmetries, then each vibrational symmetry—would lead to a distinct resonance frequency. While the literature is rich with data on the dielectric resonance of proteins, scale-free relationships of vibrational modes are scarce. Here, we report a self-similar triplet of triplet resonance frequency pattern for the four-4 nm-wide tubulin protein, for the 25-nm-wide microtubule nanowire and 1-μm-wide axon initial segment of a neuron. Thus, preserving the symmetry of vibrations was a fundamental integration feature of the three materials. There was no self-similarity in the physical appearance: the size varied by 106 orders, yet, when they vibrated, the ratios of the frequencies changed in such a way that each of the three resonance frequency bands held three more bands inside (triplet of triplet). This suggests that instead of symmetry, self-similarity lies in the principles of symmetry-breaking. This is why three elements, a protein, it’s complex and neuron resonated in 106 orders of different time domains, yet their vibrational frequencies grouped similarly. Our work supports already-existing hypotheses for the scale-free information integration in the brain from molecular scale to the cognition.
Keywords: microtubule; neuron; electromagnetic resonance; antenna; receiver; protein; fractal; impedance spectroscopy; transmission spectrum; reflectance spectrum microtubule; neuron; electromagnetic resonance; antenna; receiver; protein; fractal; impedance spectroscopy; transmission spectrum; reflectance spectrum

The sample, rat brain hippocampus (Hi); ≥0.25 mL embryonic neuron cell suspension (Lonza Inc.), was stored in the liquid nitrogen (LN2) environment. We prepared the solution for a neuron culture following the procedure outlined by Lonza company manual. Transferred the cell suspension to the pre-grown Au electrode grids as shown in Figure 1d, randomly spaced electrodes were grown on a Si/SiO2 substrate then coated with poly-D-lysine. The Au electrode surface was etched out for better electronic transmission. Incubate the cells for 4 h at 37 °C in a 5% CO2 incubator. Remove the medium from the cells, leaving a small volume to ensure the cells do not dry out. Add fresh, pre-warmed medium. Shift sections of the growing neurons using atom probe connected to high-resolution manipulators so that they grow, as we desire around the electrodes. Incubate the cells at 37 °C with 5% CO2. After the initial medium change on day 5, replace 50% of the growth media every 3 to 4 days. Warm an appropriate amount of medium to 37 °C in a sterile container. Remove 50% of the medium from the cell culture. Replace with the warmed, fresh medium and return the cells to the incubator. Positional adjustment of neural branches around the electrodes of the grid continues until day 8–9.
We used 6–14-day-old rat hippocampus cultured neuron cells for the simultaneous patch-clamp and atom probe experiment. Note that atom probes are insulated except the extreme edge ~2 nm to avoid electrical leakage from the cytoskeleton. Atom probes are scanning tunneling microscope tips coated with insulated resins. We carried out patch-clamp experiments (~150 ± 12 mm wide, n = 35, it means 35 neurons studied) for DC electric bias only. For measuring the neuron firing current, patch-clamp parameters were Rseal ~ 5 ± 1 GΩ, n = 35; Relec ~ 80 ± 10 MΩ, the success rate of proper clamping was 55% (For Figure 3, n = 35, i.e., 35 pairs of neurons were measured in 35 devices). For a neuron, a surface electrode contact with the membrane shorts the electrical nerve impulse; however, a proper atomic electrode–axon core contact was essential for sensing a synchronous signal along the length of the neuron through the axon core. By measuring the resonance frequency, we confirm that we have touched the proper location inside the neuron, a composition of resonance frequencies was particular to a material. The resonance measurements are carried out using various impedance analyzers, vector analyzers and spectrum analyzers [12,14,18,26]. In Figure 3, the perpendicular electrodes do not touch, keeps ~2–3 nm separation with the microtubule.

Microtubules are extracted from porcine brain by Cytoskeleton (Denver, CO, USA), we purchased tubulin protein including all associated tubulin-to-microtubule conversion kits and reconstituted microtubule in our laboratory. Purified microtubule subunits (tubulins) were preserved at −80 °C. To polymerize tubulin [27,28], into 6.5-μm long microtubules, 160 μL of microtubule cushion buffer (60% v/v glycerol, 80 mM PIPES pH 6.8, 1 mM EGTA, 1 mM MgCl2) was added to 830 μL of general tubulin buffer (80 mM PIPES pH 7, 1 mM EGTA (Ethylene glycol tetraacetic acid), 2 mM MgCl2) and 10 μL of 100 mM GTP (Guanosine 5’-triphosphate) solution. This mixture was kept in an ice bath for 10 min. From this mixture, 200 μL solution was added to 1 mg of tubulin and again it was incubated in an ice bath for 10 min. Afterward, this stock was placed in an incubator at 35–37 °C for 40 min. Now, to stabilize microtubules 20 μL of Paclitaxal dissolved in anhydrous DMSO (Dimethyl sulfoxide; methyl sulfoxide) was added to the solution and it was incubated for a further 10 min at 37 °C. The microtubule length was tuned ~4–20 μm. Actin microfilament was prepared following the guidelines from Cytoskeleton.

Proteins were kept at −80 °C. Protein solutions were dropped on the nanogap electrode system under 4V DC electric field so that proteins are oriented. For STM studies, nanomolar solutions were dropped on a freshly cleaved HOPG (Highly oriented pyrolytic graphite) substrate. Proteins and its complexes are scanned only under resonant AC frequencies (all resonance frequencies are noted in the Figure 2 plot); else, they break apart. The nanomolar tubulin protein solution was dropped on a four-probe Au electrode junction when the electric field of 0.5 V and 0.5 V was ON across electrodes EF and GH (see Figure 3c), respectively and independently.

Dielectric resonance frequencies of multiple proteins were mapped by applying two distinct kinds of electromagnetic fields one perpendicular to another. Such an orthogonal field-based splitting of energy exchange was never applied before to read the 2D interaction of the system profile over a large frequency range. Normally 1D transmission profiles are studied, the direction at which the input signal frequency is pumped along the same direction how much the carriers are pushed through is estimated as the response of the system. When a gating effect is applied to all the three systems, additional dynamic feature hidden in the system is revealed by orthogonal fields. Such studies are regularly applied in transistor research. However, that is not the end. We speculate that if advanced further, it may be possible to map the higher-level dynamic features in the neuron, thus, we advance here the temporal correlations observed by Ghosh et al. [7] and Agrawal et al. [9]. We have detailed how a 3D triplet of triplet band could be experimentally extracted from the three systems, located one inside another [45,46]. The tubulins are located inside microtubule and the microtubules are located inside a neuron, if the 3D band architecture is also self-similar, it would mean that the three systems could exchange geometric information conformally, i.e., without losing the angular features of the geometric shape over a time domain of 106 order in time scale.

Authors acknowledge the Asian Office of Aerospace R and D (AOARD), a part of the United States Air Force (USAF) for Grant no. FA2386-16-1-0003 on the electromagnetic resonance-based communication and intelligence of biomaterials. 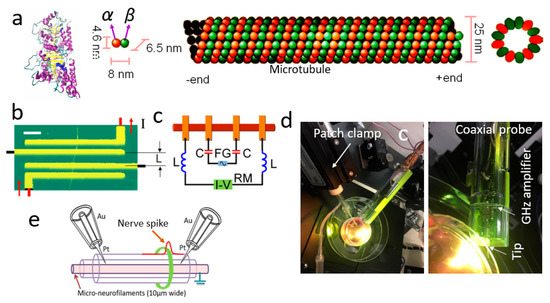 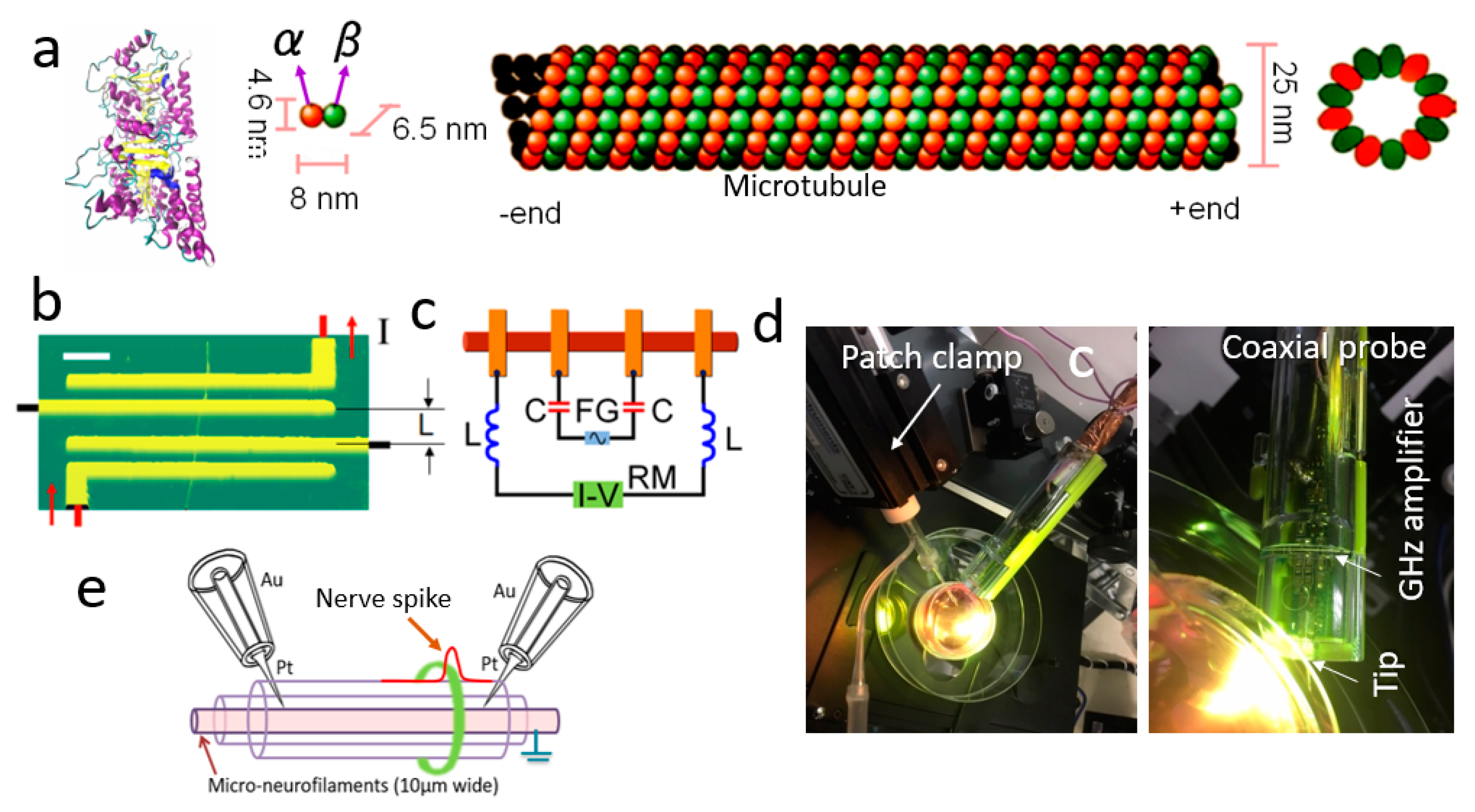