Baseline Mapping of Schistosomiasis and Soil Transmitted Helminthiasis in the Northern and Eastern Health Regions of Gabon, Central Africa: Recommendations for Preventive Chemotherapy

In order to follow the Preventive Chemotherapy (PC) for the transmission control as recommended by WHO, Gabon initiated in 2014 the mapping of Schistosomiasis and Soil Transmitted Helminthiasis (STH). Here, we report the results of the Northern and Eastern health regions, representing a third of the land area and 12% of its total population. All nine departments of the two regions were surveyed and from each, five schools were examined with 50 schoolchildren per school. The parasitological examinations were realized using the filtration method for urine and the Kato-Katz technique for stool samples. Overall 2245 schoolchildren (1116 girls and 1129 boys), mean aged 11.28 ± 0.04 years, were examined. Combined schistosomiasis and STH affected 1270 (56.6%) with variation between regions, departments, and schools. For schistosomiasis, prevalence were 1.7% across the two regions, with no significant difference (p > 0.05) between the Northern (1.5%) and the Eastern (1.9%). Schistosomiasis is mainly caused by Schistosoma haematobium with the exception of one respective case of S. mansoni and S. guineensis. STH are more common than schistosomiasis, with an overall prevalence of 56.1% significantly different between the Northern (58.1%) and Eastern (53.6%) regions (p = 0.034). Trichuris trichiura is the most abundant infection with a prevalence of 43.7% followed by Ascaris lumbricoides 35.6% and hookworms 1.4%. According to these results, an appropriate PC strategy is given. In particular, because of the low efficacy of a single recommended drug on T. trichiura and hookworms, it is important to include two drugs for the treatment of STH in Gabon, due to the high prevalence and intensities of Trichuris infections. View Full-Text
Keywords: schistosomiasis; soil-transmitted-helminthiasis; mapping; preventive chemotherapy; transmission control; Gabon; Central Africa schistosomiasis; soil-transmitted-helminthiasis; mapping; preventive chemotherapy; transmission control; Gabon; Central Africa
►▼ Show Figures 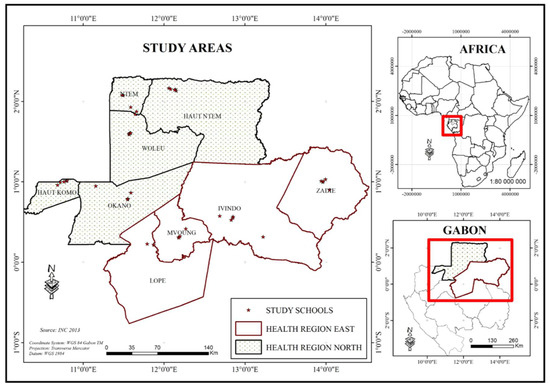