Using Google Trends to Examine the Spatio-Temporal Incidence and Behavioral Patterns of Dengue Disease: A Case Study in Metropolitan Manila, Philippines
Next Article in Special Issue

Low Praziquantel Treatment Coverage for Schistosoma mansoni in Mayuge District, Uganda, Due to the Absence of Treatment Opportunities, Rather Than Systematic Non-Compliance

Based on an ensemble of global circulation models (GCMs), four representative concentration pathways (RCPs) and several ongoing and planned Coupled Model Intercomparison Projects (CMIPs), the Intergovernmental Panel on Climate Change (IPCC) predicts that global, average temperatures will increase by at least 1.5 °C in the near future and more by the end of the century if greenhouse gases (GHGs) emissions are not genuinely tempered. While the RCPs are indicative of various amounts of GHGs in the atmosphere the CMIPs are designed to improve the workings of the GCMs. We chose RCP4.5 which represented a medium GHG emission increase and CMIP5, the most recently completed CMIP phase. Combining this meteorological model with a biological counterpart model accounted for replication and survival of the snail intermediate host as well as maturation of the parasite stage inside the snail at different ambient temperatures. The potential geographical distribution of the three main schistosome species: Schistosoma japonicum, S. mansoni and S. haematobium was investigated with reference to their different transmission capabilities at the monthly mean temperature, the maximum temperature of the warmest month(s) and the minimum temperature of the coldest month(s). The set of six maps representing the predicted situations in 2021–2050 and 2071–2100 for each species mainly showed increased transmission areas for all three species but they also left room for potential shrinkages in certain areas. View Full-Text
Keywords: climate change; schistosomiasis; distribution; intermediate snail host; transmission; modelling climate change; schistosomiasis; distribution; intermediate snail host; transmission; modelling
►▼ Show Figures 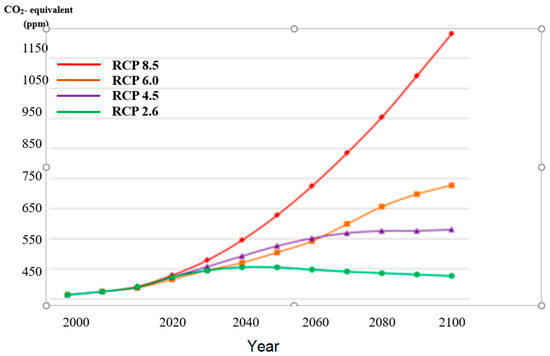