Young Adults in Endemic Areas: An Untreated Group in Need of School-Based Preventive Chemotherapy for Schistosomiasis Control and Elimination
Next Article in Special Issue

Endemic Melioidosis in Southern China: Past and Present
Previous Article in Journal

Melioidosis in the Philippines

The first documented case of melioidosis in the Philippines occurred in 1948. Since then, there have been sporadic reports in the literature about travelers diagnosed with melioidosis after returning from the Philippines. Indigenous cases, however, have been documented rarely, and under-reporting is highly likely. This review collated all Philippine cases of melioidosis published internationally and locally, as well as unpublished case series and reports from different tertiary hospitals in the Philippines. In total, 25 papers and 41 cases were identified. Among these, 23 were indigenous cases (of which 20 have not been previously reported in the literature). The most common co-morbidity present was diabetes mellitus, and the most common presentations were pulmonary and soft tissue infections. Most of the cases received ceftazidime during the intensive phase, while trimethoprim-sulfamethoxazole was given during the eradication phase. The known mortality rate was 14.6%, while 4.9% of all cases were reported to have had recurrence. The true burden of melioidosis in the country is not well defined. A lack of awareness among clinicians, a dearth of adequate laboratories, and the absence of a surveillance system for the disease are major challenges in determining the magnitude of the problem. View Full-Text
Keywords: melioidosis; Philippines; Burkholderia pseudomallei melioidosis; Philippines; Burkholderia pseudomallei
►▼ Show Figures 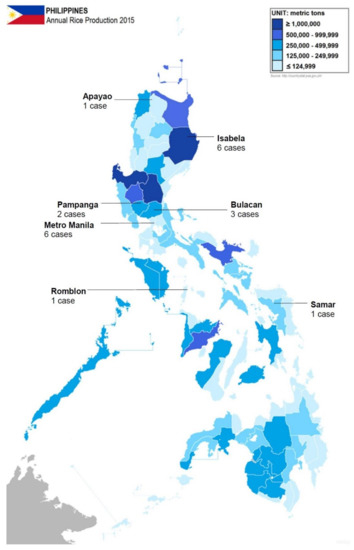