Railway Transition Curves: A Review of the State-of-the-Art and Future Research
Next Article in Special Issue

Competing Risks Models for the Assessment of Intelligent Transportation Systems Devices: A Case Study for Connected and Autonomous Vehicle Applications

This paper presents models of path and control planning for the parking, docking, and movement of autonomous vehicles at low speeds, considering space constraints. Given the low speed of motion, and in order to test and approve the proposed algorithms, vehicle kinematic models are used. Recent works on the development of parking algorithms for autonomous vehicles are reviewed. Bicycle kinematic models for vehicle motion are considered for three basic types of vehicles: passenger car, long wheelbase truck, and articulated vehicles with and without steered semitrailer axes. Mathematical descriptions of systems of differential equations in matrix form and expressions for determining the linearization elements of nonlinear motion equations that increase the speed of finding the optimal solution are presented. Options are proposed for describing the interaction of vehicle overall dimensions with the space boundaries, within which a maneuver should be performed. An original algorithm that considers numerous constraints is developed for determining vehicle permissible positions within the closed boundaries of the parking area, which are directly used in the iterative process of searching for the optimal plan solution using nonlinear model predictive control (NMPC). The process of using NMPC to find the best trajectories and control laws while moving in a semi-limited space of constant curvature (turnabouts, roundabouts) are described. Simulation tests were used to validate the proposed models for both constrained and unconstrained conditions and the output (state-space) and control parameters’ dependencies are shown. The proposed models represent an initial effort to model the movement of autonomous vehicles for parking and have the potential for other highway applications. View Full-Text
Keywords: autonomous vehicles; parking; path planning; space restrictions; optimization autonomous vehicles; parking; path planning; space restrictions; optimization
►▼ Show Figures 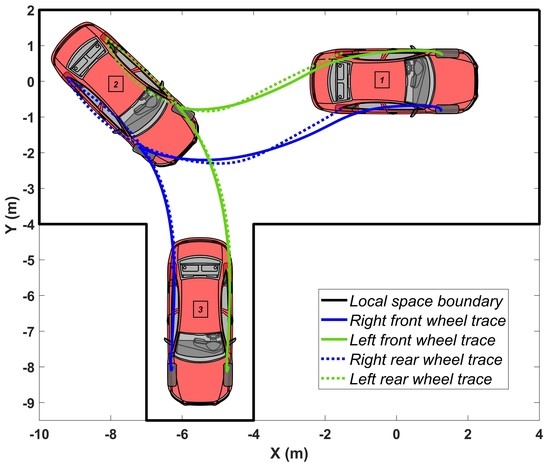