Geospatial data are essential for the decision-making process. However, obtaining and keeping such data up to date usually require much time and many financial resources. In order to minimize the production costs and incentivize sharing these data, countries are promoting the implementation of Spatial Data Infrastructures (SDI) at the different public administration levels. The International Cartographic Association (ICA) proposes a formal model that describes the main concepts of an SDI based on three of the five viewpoints of the Reference Model for Open Distributed Processing (RM-ODP). Afterwards, researchers extended ICA’s model to describe, more properly, the actors, hierarchical relationship and interactions related to the policies that drive an SDI. However, the proposed extensions are semantically inconsistent with the original proposal. Moreover, the use of ICA’s formal model and its extensions has not been assessed yet to specify a corporate-level SDI. This study describes the merger of actors and policies proposed by the ICA and its extensions in order to eliminate differences in the semantics or terminology among them. This unified model was applied to specify a corporate SDI for a large Brazilian corporation, the Minas Gerais Power Company (Companhia Energética de Minas Gerais (Cemig)), which is comprised of about 200 companies in the power sector. The case study presents part of the specification of the five RM-ODP viewpoints, i.e., the three viewpoints featured in ICA’s formal model (Enterprise, Information, and Computation) and the other two viewpoints that make up the RM-ODP (Engineering and Technology). The adapted ICA’s model proved adequate to describe SDI-Cemig. In addition, the case study may serve as an example of the specification and implementation of new SDIs, not only corporate ones, but also of public agencies at any hierarchical level. View Full-Text
Keywords: spatial data infrastructure; International Cartographic Association; ICA’s SDI formal model; corporate SDI; SDI-Cemig spatial data infrastructure; International Cartographic Association; ICA’s SDI formal model; corporate SDI; SDI-Cemig
►▼ Show Figures 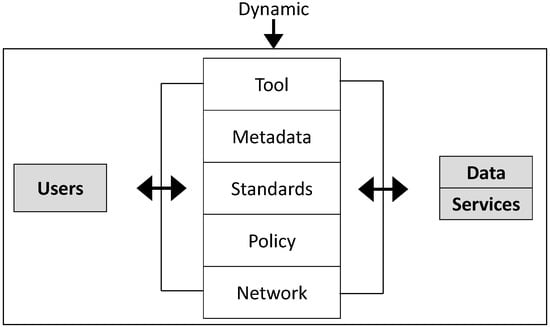