Efficacy of Perceptual Learning-Based Vision Training as an Adjuvant to Occlusion Therapy in the Management of Amblyopia: A Pilot Study
Next Article in Special Issue

Previous studies have focused on topics such as multimodal integration and object discrimination, but there is limited research on the effect of multimodal learning in memory. Perceptual studies have shown facilitative effects of multimodal stimuli for learning; the current study aims to determine whether this effect persists with memory cues. The purpose of this study was to investigate the effect that audiovisual memory cues have on memory recall, as well as whether the use of multiple memory cues leads to higher recall. The goal was to orthogonally evaluate the effect of the number of self-generated memory cues (one or three), and the modality of the self-generated memory-cue (visual: written words, auditory: spoken words, or audiovisual). A recall task was administered where participants were presented with their self-generated memory cues and asked to determine the target word. There was a significant main effect for number of cues, but no main effect for modality. A secondary goal of this study was to determine which types of memory cues result in the highest recall. Self-reference cues resulted in the highest accuracy score. This study has applications to improving academic performance by using the most efficient learning techniques.
Keywords: memory cues; multisensory integration memory cues; multisensory integration

A priori power calculations were conducted using G*Power [22,23] to determine an appropriate sample size. We decided that a medium effect size (d = 0.5) would be the effect size of interest, with a = 0.05, and a desired power (1 − B) = 0.95, which yielded a desired minimum sample size of 28 participants. In order to allow for even counterbalancing of conditions and word lists, we decided to collect data from 36 participants for the study. Thirty-six Mount Allison University students registered in an Introductory Psychology course participated in this experiment in exchange for partial course credit. The ages of participants ranged from 17 to 24, with a mean age of 18.91 (SD = 1.48). Twenty-seven participants identified as female and nine identified as males; all reported normal or corrected to normal vision and hearing. The total testing time for each participant was approximately one hour. Seven additional participants participated in pilot testing for the stimulus sets, and data from one additional participant were excluded, as they were unable to complete the task in the time allotted. The research protocol for this project was approved by the Research Ethics Board of Mount Allison University on November 8, 2016 (Project Code 2016-051).

Randomized word lists were created using the MRC Psycholinguistic Database [24]. The words on the list were all two to three syllables of high concreteness (450–550 out of 700) and high familiarity (500–700 out of 700). The word length ranged from four to eight letters, and they were all high-frequency words (Freq KF: 100–10000). This ensured that there would not be words that participants were unfamiliar with and could therefore not make effective memory cues for (as they would not possess any semantic/episodic associations with words they had never seen). In total, 120 words were selected and randomly separated into 6 lists of 20 words (see Table 2 for full list of words).

Testing took place in a quiet, isolated room, with only the participant and the researcher in the room together. Participants completed a consent form and a demographic questionnaire including questions about age, gender, and vision and hearing. A computer monitor located approximately 60 cm from the participant displayed each word sequentially, from the randomly assigned word lists, centrally on the screen in a black Arial font, size 48. SuperLab 5.0 (V. 2.02; Cedrus Corporation; San Pedro, CA, USA) controlled stimulus presentation. This was a within-subject study with every participant completing all six conditions: one visual cue, three visual cues, one auditory cue, three auditory cues, one audiovisual cue, and three audiovisual cues. Presentation condition and wordlist were counterbalanced across the participants in the study in order to ensure that there was no effect of specific words in a wordlist on performance. Each word was presented against a white background until the participant responded, or for a maximum of 20 s. Participants were told that a memory cue was an associated word that would spark their memory of the original word and that they were generating the cues to see what words would be commonly associated with the base word. They were asked to generate one or three cues for every word presented, depending on the condition, which was counterbalanced across participants. Regardless of the number of cues being generated, participants had a maximum of 20 s to generate them. The researcher was present and recorded all verbal memory cues generated by the participant manually, while written memory cues were entered into the computer program.
A non-verbal distraction task was completed after the participant had completed all six blocks. It consisted of a series of simple math questions including addition, subtraction, multiplication, and division with 56 questions. This task was used to ensure that participants were not rehearsing the to-be-remembered words. In doing this, we ensured that we were measuring which types of cues (self-referent vs. semantic definitional; multisensory vs. unisensory) aid in retrieval of the target word.
After completing the non-verbal distraction task, participants were given a recall task. This consisted of participants being presented with the cues that they had generated in the encoding condition. Each self-generated cue was presented either visually on a cue card, read aloud by the researcher, or a combination of both. The visual memory cues were displayed for approximately 20 s, and the auditory cues were verbally communicated once but could then be repeated as many times as the participant wanted within 20 s. The audiovisual cues were presented on a cue card and read aloud by the researcher. These cues were presented in the same order as they had been generated. Participants were asked to write down the original word associated with the memory cue(s) presented to them. Participants were debriefed, and the nature of the study was explained.

Data were tabulated based on number of correct responses per participant per condition, resulting in a mean recall score as a percentage. The mean and standard errors for each condition were calculated and are presented in Figure 1. Statistical analysis was completed using SPSS (V. 25.0). A within-participants factorial ANOVA was conducted with factors of number of cues (2: one, three) × modality (3: Visual, Auditory, Audiovisual) to compare the mean recall scores. This ANOVA was used in order to analyze the effects of number of cues and modality of cues individually, as well as the interaction between those effects.

Similar to [19], the current study also aimed to determine which type of cue is most effective for recall. However, we measured how many self-generated memory cues of each type were used and their accuracy rather than providing them. The modes of memory cues we chose to analyze were based on the findings of [19]: Self-reference (i.e., autobiographical), phonemic (i.e., rhyming), and semantic. In categorizing, the cues we chose to use more specific semantic cues to avoid subjectivity: semantic definitional (i.e., antonym) and semantic contextual (i.e., fill in the blank). For examples of each type of cue, see Table 1. Rogers et al. [19] included structural question cues (the physical properties of a word—capital letter, long, etc.) in their study and found that they were not a useful cue for recall. For the current study, we had participants create memory cues by typing them, speaking them aloud, and a combination of both. Based on the fact that we cannot evaluate the structure of an auditory cue and the non-significant results of Rogers et al. [19] for structural question cues, we did not evaluate for efficiency of structural memory cues.
Means and confidence intervals were calculated for each mode of memory cue, and effect sizes were calculated between each mode of cue. This analysis was necessary because not all participants used all types of cues, and as such, we were unable to use traditional statistical tests (e.g., one-way ANOVA). Error bars in Figure 2 display no overlap between the 95% confidence intervals between self-reference and semantic contextual, semantic contextual, and semantic definitional, or self-referent and semantic definitional. Self-reference cues were the most effective mode of memory cue and resulted in a higher accuracy score than both semantic definitional, r2 = 0.404, M = 0.80, N = 25, and semantic contextual cues, r2 = 0.772, M = 0.99 N = 33, supporting our hypothesis. Semantic definitional cues resulted in a higher accuracy score than semantic contextual, r2 = 0.502, M = 0.80, meaning semantic contextual cues were the least effective mode of memory cue, M = 0.20.

The study was conceptualized by J.M.P.W., designed by both authors, and data collection was by H.C.P. The initial draft was written by H.C.P., and revisions were suggested by J.M.P.W. All authors have read and agreed to the published version of the manuscript.

The study was conducted according to the guidelines of the Declaration of Helsinki, and approved by the Research Ethics Board of Mount Allison University (protocol code 2016-051 on 8 November 2016).

Data available upon request from the corresponding author. 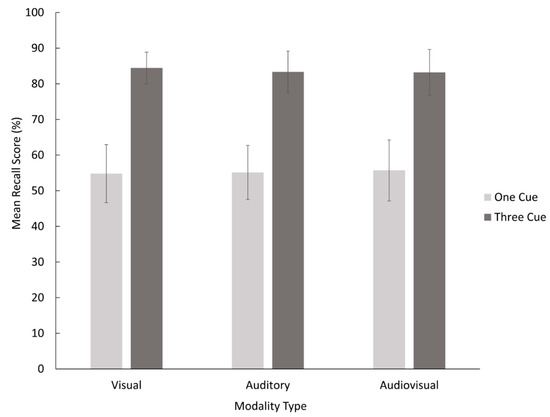 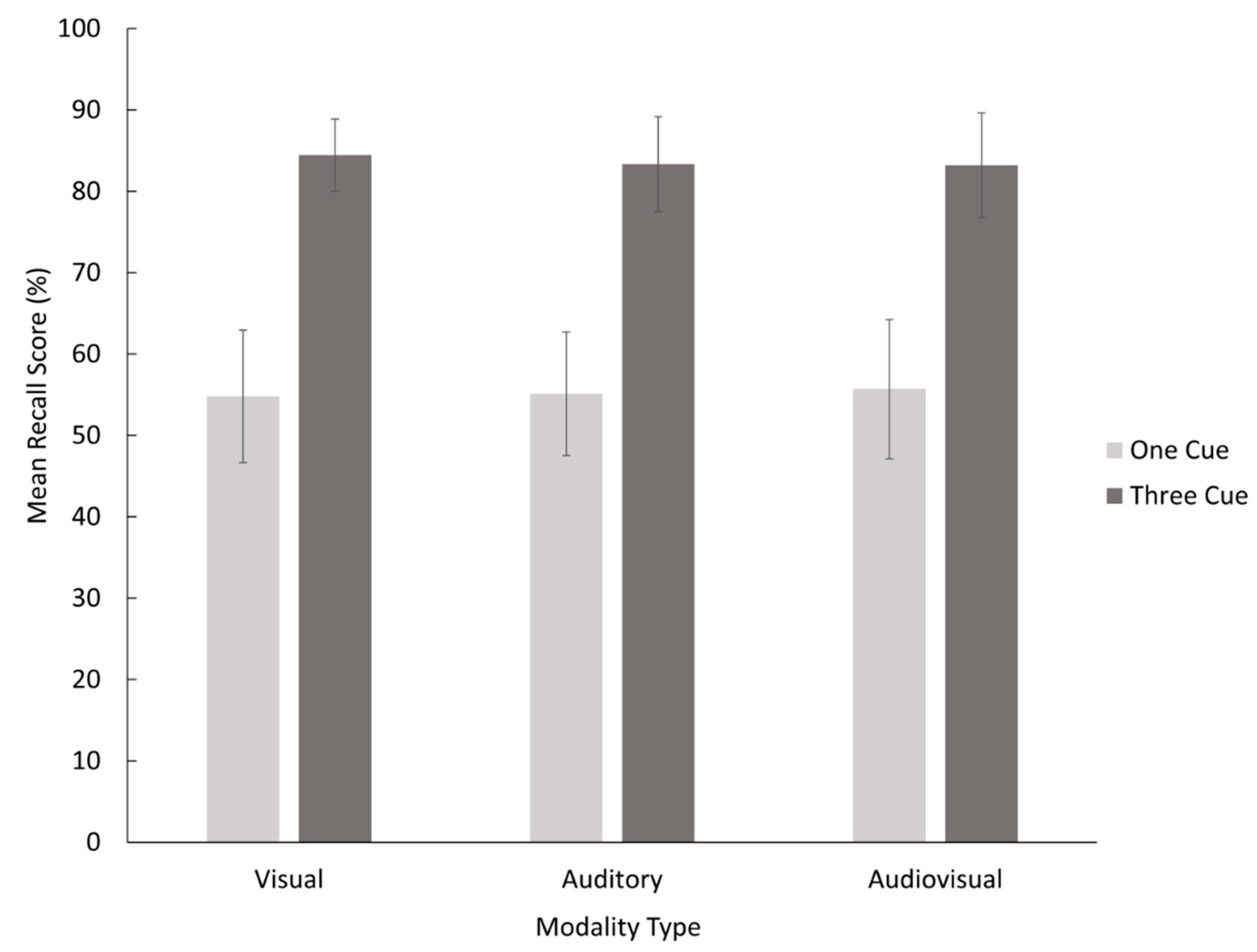 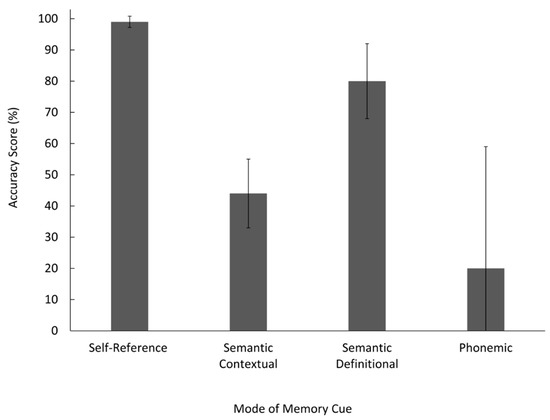 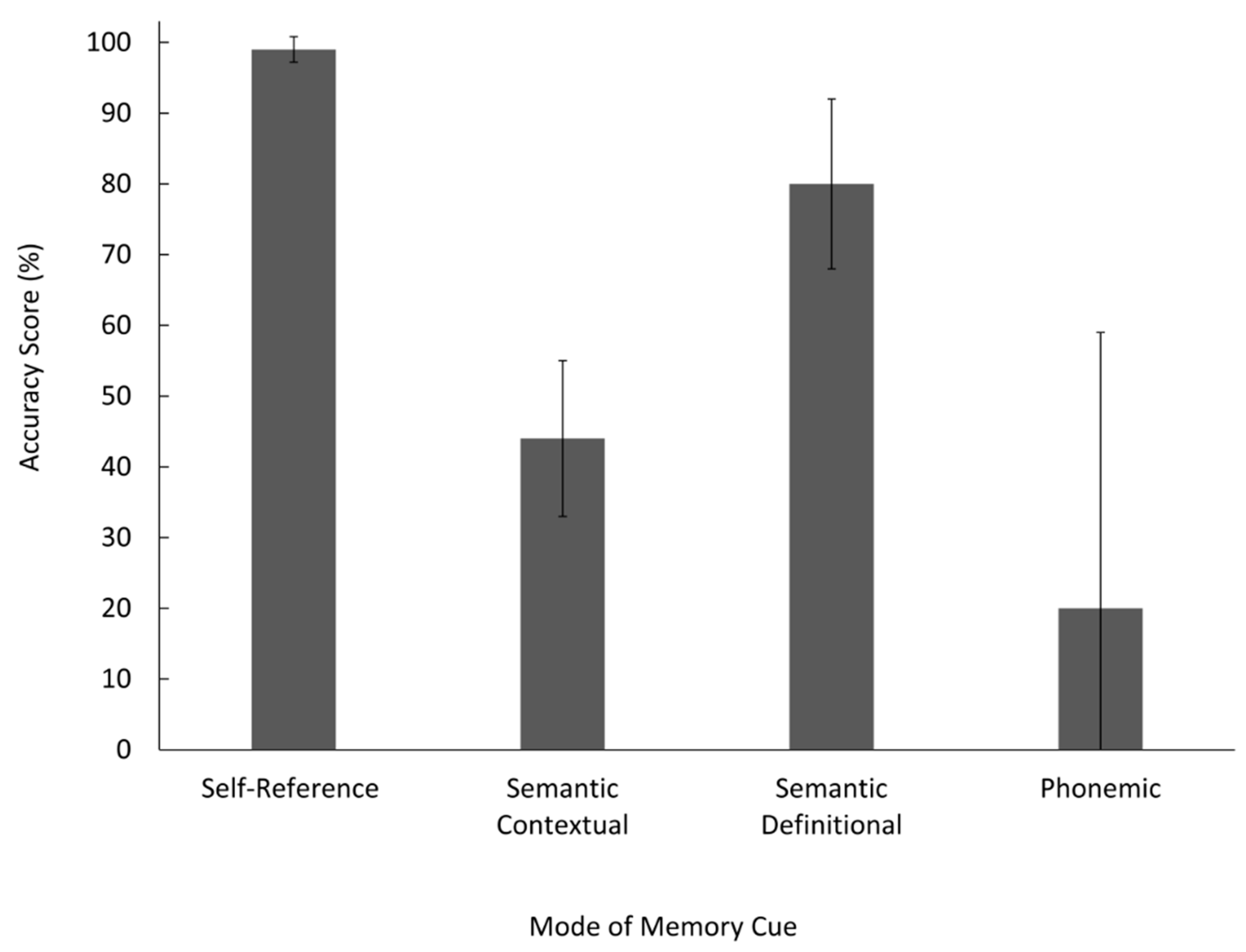 Table 2. List of words used per block.
Table 2. List of words used per block.
© 2021 by the authors. Licensee MDPI, Basel, Switzerland. This article is an open access article distributed under the terms and conditions of the Creative Commons Attribution (CC BY) license (http://creativecommons.org/licenses/by/4.0/).
We use cookies on our website to ensure you get the best experience. Read more about our cookies here.
Accept
We have just recently launched a new version of our website. Help us to further improve by taking part in this short 5 minute survey here. here.
Never show this again