Meaning and Attentional Guidance in Scenes: A Review of the Meaning Map Approach
Previous Article in Special Issue

Hands Ahead in Mind and Motion: Active Inference in Peripersonal Hand Space

The Limitations of Reward Effects on Saccade Latencies: An Exploration of Task-Specificity and Strength

Saccadic eye movements are simple, visually guided actions. Operant conditioning of specific saccade directions can reduce the latency of eye movements in the conditioned direction. However, it is not clear to what extent this learning transfers from the conditioned task to novel tasks. The purpose of this study was to investigate whether the effects of operant conditioning of prosaccades to specific spatial locations would transfer to more complex oculomotor behaviours, specifically, prosaccades made in the presence of a distractor (Experiment 1) and antisaccades (Experiment 2). In part 1 of each experiment, participants were rewarded for making a saccade to one hemifield. In both experiments, the reward produced a significant facilitation of saccadic latency for prosaccades directed to the rewarded hemifield. In part 2, rewards were withdrawn, and the participant made a prosaccade to targets that were accompanied by a contralateral distractor (Experiment 1) or an antisaccade (Experiment 2). There were no hemifield-specific effects of the reward on saccade latency on the remote distractor effect or antisaccades, although the reward was associated with an overall slowing of saccade latency in Experiment 1. These data indicate that operant conditioning of saccadic eye movements does not transfer to similar but untrained tasks. We conclude that rewarding specific spatial locations is unlikely to induce long-term, systemic changes to the human oculomotor system. View Full-Text
Keywords: saccade; conditioning; reward; learning; distractor; remote distractor; antisaccade; oculomotor; attention saccade; conditioning; reward; learning; distractor; remote distractor; antisaccade; oculomotor; attention
►▼ Show Figures 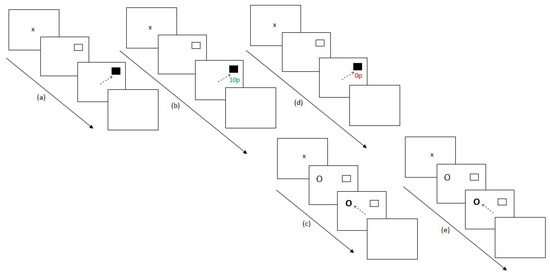