The Louder, the Longer: Object Length Perception Is Influenced by Loudness, but Not by Pitch
Previous Article in Journal

A Review of Motion and Orientation Processing in Migraine

The A-Effect and Global Motion

When the head is tilted, an objectively vertical line viewed in isolation is typically perceived as tilted. We explored whether this shift also occurs when viewing global motion displays perceived as either object-motion or self-motion. Observers stood and lay left side down while viewing (1) a static line, (2) a random-dot display of 2-D (planar) motion or (3) a random-dot display of 3-D (volumetric) global motion. On each trial, the line orientation or motion direction were tilted from the gravitational vertical and observers indicated whether the tilt was clockwise or counter-clockwise from the perceived vertical. Psychometric functions were fit to the data and shifts in the point of subjective verticality (PSV) were measured. When the whole body was tilted, the perceived tilt of both a static line and the direction of optic flow were biased in the direction of the body tilt, demonstrating the so-called A-effect. However, we found significantly larger shifts for the static line than volumetric global motion as well as larger shifts for volumetric displays than planar displays. The A-effect was larger when the motion was experienced as self-motion compared to when it was experienced as object-motion. Discrimination thresholds were also more precise in the self-motion compared to object-motion conditions. Different magnitude A-effects for the line and motion conditions—and for object and self-motion—may be due to differences in combining of idiotropic (body) and vestibular signals, particularly so in the case of vection which occurs despite visual-vestibular conflict. View Full-Text
Keywords: vision; A-effect; vection; subjective visual vertical; tilt; orientation; self-motion; gravity; motion; motion parallax vision; A-effect; vection; subjective visual vertical; tilt; orientation; self-motion; gravity; motion; motion parallax
►▼ Show Figures 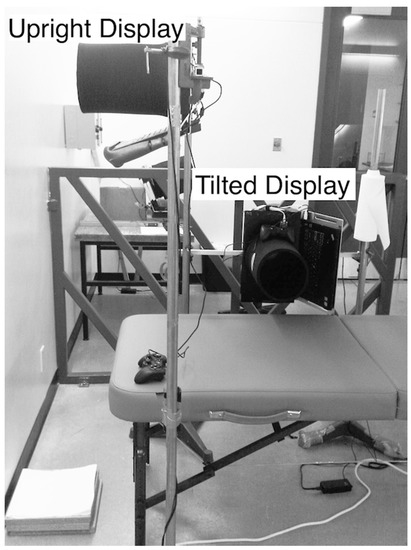