Near-Field Simulations of Film Cooling with a Modified DES Model

In this study a system constituted by seven double skin facades (DSF), three equipped with venetian blinds and four not equipped with venetian blinds, applied in a virtual chamber, is developed. The project will be carried out in winter conditions, using a numerical model, in transient conditions, and based on energy and mass balance linear integral equations. The energy balance linear integral equations are used to calculate the air temperature inside the DSF and the virtual chamber, the temperature on the venetian blind, the temperature on the inner and outer glass, and the temperature distribution in the surrounding structure of the DSF and virtual chamber. These equations consider the convection, conduction, and radiation phenomena. The heat transfer by convection is calculated by natural, forced, and mixed convection, with dimensionless coefficients. In the radiative exchanges, the incident solar radiation, the absorbed solar radiation, and the transmitted solar radiation are considered. The mass balance linear integral equations are used to calculate the water mass concentration and the contaminants mass concentration. These equations consider the convection and the diffusion phenomena. In this numerical work seven cases studies and three occupation levels are simulated. In each case the influence of the ventilation airflow and the occupation level is analyzed. The total number of thermal and indoor air quality uncomfortable hours are used to evaluate the DSF performance. In accordance with the obtained results, in general, the indoor air quality is acceptable; however, when the number of occupants in the virtual chamber increases, the Predicted Mean Vote index value increases. When the airflow rate increases the total of Uncomfortable Hours decreases and, after a certain value of the airflow rate, it increases. The airflow rate associated with the minimum value of total Uncomfortable Hours increases when the number of occupants increases. The energy production decreases when the airflow increases and the production of energy is higher in DSF with venetian blinds system than in DSF without venetian blinds system. View Full-Text
Keywords: double skin facade; virtual chamber; numerical simulation; thermal comfort; indoor air quality double skin facade; virtual chamber; numerical simulation; thermal comfort; indoor air quality
►▼ Show Figures 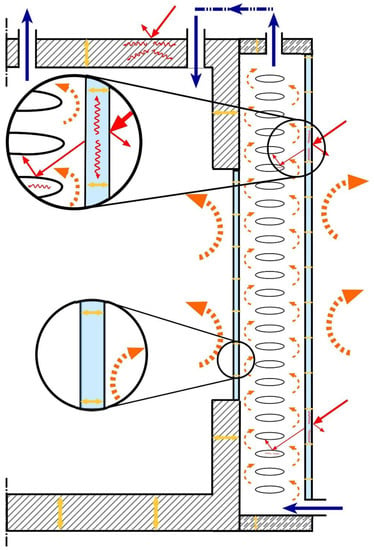 Eusébio Conceição
Eusébio Conceição is an Assistant Professor at Sciences and Technology Faculty of University of Algarve (Portugal). He finished his Ph. D. in 1996 at the University of Coimbra (Portugal); he has published more than 15 chapters and books, published more than 45 papers in journals; published more than 130 papers presented at conferences; participated in more than 30 scientifically projects; and is author of more than 30 patents. He has received 3 awards and developed 15 softwares in the area of energy and acoustics, with special emphasis on the dynamic simulation of buildings, numerical simulation of flows, and the thermal response of human thermophysiology. He also has developed several laboratory models, laboratory prototypes, and pilot plants. He was responsible for the Faro delegation of ASHRAE Students and responsible for Chapter Students Activities of the ASHRAE delegation in Portugal. His area(s) of expertise and research interests are energy, thermal comfort, air quality, building thermal simulation, and computational fluids dynamics. In the last years he developed several softwares used in the projects of thermal systems of buildings and occupants and developed several equipments and products. He is the Course Director in Renewable Energy and Energy Management and Design and Rapid Prototyping.
Zoom | Orient | As Lines | As Sticks | As Cartoon | As Surface | Previous Scene | Next Scene
We use cookies on our website to ensure you get the best experience. Read more about our cookies here.
Accept
We have just recently launched a new version of our website. Help us to further improve by taking part in this short 5 minute survey here. here.
Never show this again