:
In this paper, the heat transfer performance of gravity heat pipes with anodic aluminum oxide (AAO) wall surface is studied. The main purpose is to study the effects of the length and diameter of AAO nanotubes on the temperature distribution, overall thermal resistance, and dry-out occurrence of gravity heat pipes charged with acetone under different input heat powers. AAO nanotubes were first grown by anodizing the inner wall surface of the evaporator section of aluminum alloy gravity heat pipes. The influences of AAO nanotube length and diameter on the temperature distribution, overall thermal resistance, and dry-out occurrence were then investigated by a thermal performance test system. Experimental results show that increasing the AAO nanotube length could result in reduced temperature variation between the evaporator section and the condenser section, leading to reduced thermal resistance, and delayed dry-out occurrence at higher heat inputs. In addition, increasing the AAO nanotube diameter could also cause decreases in temperature variation and overall thermal resistance, but it could not have a significant effect on the occurrence of dry-out phenomenon. Based on these results, it can be concluded that, if the anodic oxidation treatment is applied to the inner wall surface of the evaporator section of a gravity heat pipe, its heat transfer performance could be significantly improved. The maximum temperature difference and overall thermal resistance of the processed heat pipe are 46.12% and 58.68% lower than those of the unprocessed heat pipe, respectively; moreover, compared to the unprocessed heat pipe, the maximum applicable input heat power to avoid dry-out occurrence can be increased up to about 40%. Such a study could be used for cooling purposes in a wide range of applications such as passive cooling of electronic devices, highly efficient heat recovery, and cleanroom air conditioning.
Keywords:
gravity heat pipes; thermal performance; anodic aluminum oxide; nanotube size

In this study, an anodic oxidation treatment method was used to grow anodic aluminum oxide (AAO) nanotubes on the inner wall surface of the evaporator section of aluminum alloy gravity heat pipes. The process of growing the AAO nanotubes was accomplished by immersing an aluminum or aluminum alloy substrate in an acidic electrolyte solution and passing a voltage between the anode and the cathode. It can be divided into three stages. In the first stage, due to the high electrical conductivity of aluminum, aluminum ions (Al3+) can be easily dissolved on the wall surface of the aluminum substrate and react with oxygen ions from the electrolyte to generate alumina (Al3O2), thereby rapidly forming a dense barrier layer. In the second stage, the resistance in the anodization circuit increases as the barrier layer thickens. When the thickness of the barrier layer reaches a certain value, the electric field starts to concentrate on the local imperfections on the barrier layer, resulting in a non-uniform oxide thickening and forming individual penetration paths into the initial pores. In the third stage, the bottom of the pores continuously dissolves aluminum ions due to the concentration of the electric field until the dissolution of aluminum ions and the growth of alumina reach a dynamic equilibrium. At this point, the current in the circuit remains almost constant and AAO nanotubes grow steadily. By increasing the treatment time, the length of the AAO nanotubes can be extended; by increasing the anodizing voltage, the diameter of the AAO nanotubes can be enlarged (due to the concentration effect of the electric field). To form regularly arranged pore nanostructures, different electrolytes may be used. Each electrolyte has its applicable operating voltage range. From low-voltage range to high-voltage range, the suitable electrolytes are sulfuric acid (H2SO4), oxalic acid (H2C2O4), and phosphoric acid (H3PO4) [20]. It should be noted that the AAO nanotube length L (in unit of µm) and diameter D (in unit of nm) are approximately proportional to the treatment time t (in unit of hour) and anodizing voltage V (in unit of V) [20,21,22], respectively. In our experiments, using oxalic acid electrolyte to grow AAO nanotubes, the empirical formulas for predicting the nanotube size are
L = 2t
D = 2V − 10
The accuracies of the two formulas are within 1.96% and 7.78% relative errors, respectively.

In this section, the relevant experimental design and setup, including the anodic oxidation treatment, heat pipe processing, and thermal performance test, are reported.

6063-T5 aluminum alloy was used as the base material for the gravity heat pipes in the present study. The aluminum alloy pipes fabricated by a machining process have an outer diameter of 19 mm, an inner diameter of 17 mm, and a pipe length of 300 mm, as shown in Figure 1. The ratio between evaporator section, adiabatic section, and condenser section is 1:1:1. To grow AAO nanotubes on the inner wall surface of the evaporator section of aluminum alloy gravity heat pipes, the following anodic oxidation treatment procedure, also shown in Figure 2, was designed for each pipe:

The main body of the heat pipe used in this study is an anodized open-ended hollow aluminum alloy pipe. The pipe was first immersed in ethanol and cleaned with an ultrasonic cleaner for 20 min and then rinsed with DI water to ensure its internal surface was clean and free of impurities. Next, both its open ends were sealed by welding, and one end was equipped with an anti-leak valve. Evacuation and working fluid (acetone) filling were then performed down to a pressure of 5 kPa and up to an amount of 40 mL through this valve to complete an aluminum alloy heat pipe having AAO nanotubes on the inner wall surface of the evaporator section, as shown in Figure 4.
In this study, a thermal performance test system was set up, as shown in Figure 5. The test system can be divided into three zones: the heating zone, the transportation zone, and the cooling zone. Each zone was covered with three layers of insulation material (fireproof cotton, calcium silicate board, and polyethylene foam board) to ensure that no heat exchange with the surrounding environment occured during the test, resulting in heat loss. The evaporator section of the heat pipe was placed vertically in the heating zone, where the heater was connected to a DC power supply to provide the required thermal power. The condenser section of the heat pipe was placed vertically in the cooling zone, and the temperature inside the cooling zone was maintained at 25 °C by a circulating water bath. Three K-type thermocouples were embedded in each area with equal distance (30 mm) and connected to a temperature recorder to fully record the exact temperatures during the test. Through the measured temperature data, the thermal performance of the gravity heat pipe can then be further analyzed. This study used the overall thermal resistance of the gravity heat pipe (R) as one of the key parameters to investigate the heat transfer performance of gravity heat pipes, defined as the ratio of the difference between the average temperature of the evaporator section () and the average temperature of the condenser section () to the input heat power from the heating zone (Qin). The relationship is as follows:
The absolute relative uncertainty of the quantity defined in the above equation was estimated to be less than 2.77%.

Now, we consider the problem of heat transfer performance enhancement of gravity heat pipes by growing AAO nanotubes on inner wall surface. The influences of AAO nanotube length and diameter on the temperature distribution, overall thermal resistance, and dry-out occurrence of the processed gravity heat pipes under different input heat powers (symbol: Qin) were analyzed, respectively. Parameter studies were carried out within the ranges: , , and .

Figure 8 examines the overall thermal resistance R versus the input heat power Qin for the AAO nanotube length , , , and with the AAO nanotube diameter D = 30 nm (Figure 8a) and D = 90 nm (Figure 8b). In Figure 8, the overall thermal resistance R generally decreases as the input heat power Qin increases, and tends to be gentle. However, when the quality in the evaporator section reaches 100%, the temperature of the evaporator section suddenly rises, resulting in a sudden increase in the overall thermal resistance R. At this point, it can be judged that a dry-out phenomenon has occurred. The dry-out phenomenon occurs when the heat input heat power Qin is greater than 125 W, 150 W, 175 W, 175 W, and 175 W in the cases of tube lengths L = 0 µm (unprocessed heat pipe), 6 µm, 10 µm, 14 µm, and 18 µm, respectively. This means that the dry-out occurrence can be delayed due to the surface structure. This reason is that the growth of the tube length can increase the specific surface area, so that the working fluid can transfer more energy from the heat source through the solid surface, thereby reducing the heat accumulation and delaying the occurrence of dry-out phenomenon. In addition, comparing Figure 8a,b, it can be found that by increasing the tube diameter D, the overall thermal resistance R can be further reduced, but the tube diameter does not seem to have the effect of delaying the dry-out occurrence. Compared to the unprocessed heat pipe (dashed line), the maximum applicable input heat power to avoid dry-out occurrence can be increased up to about 40%.

This work was financially supported by the Ministry of Science and Technology (MOST) in Taiwan under grant No 106-2221-E-033-040. 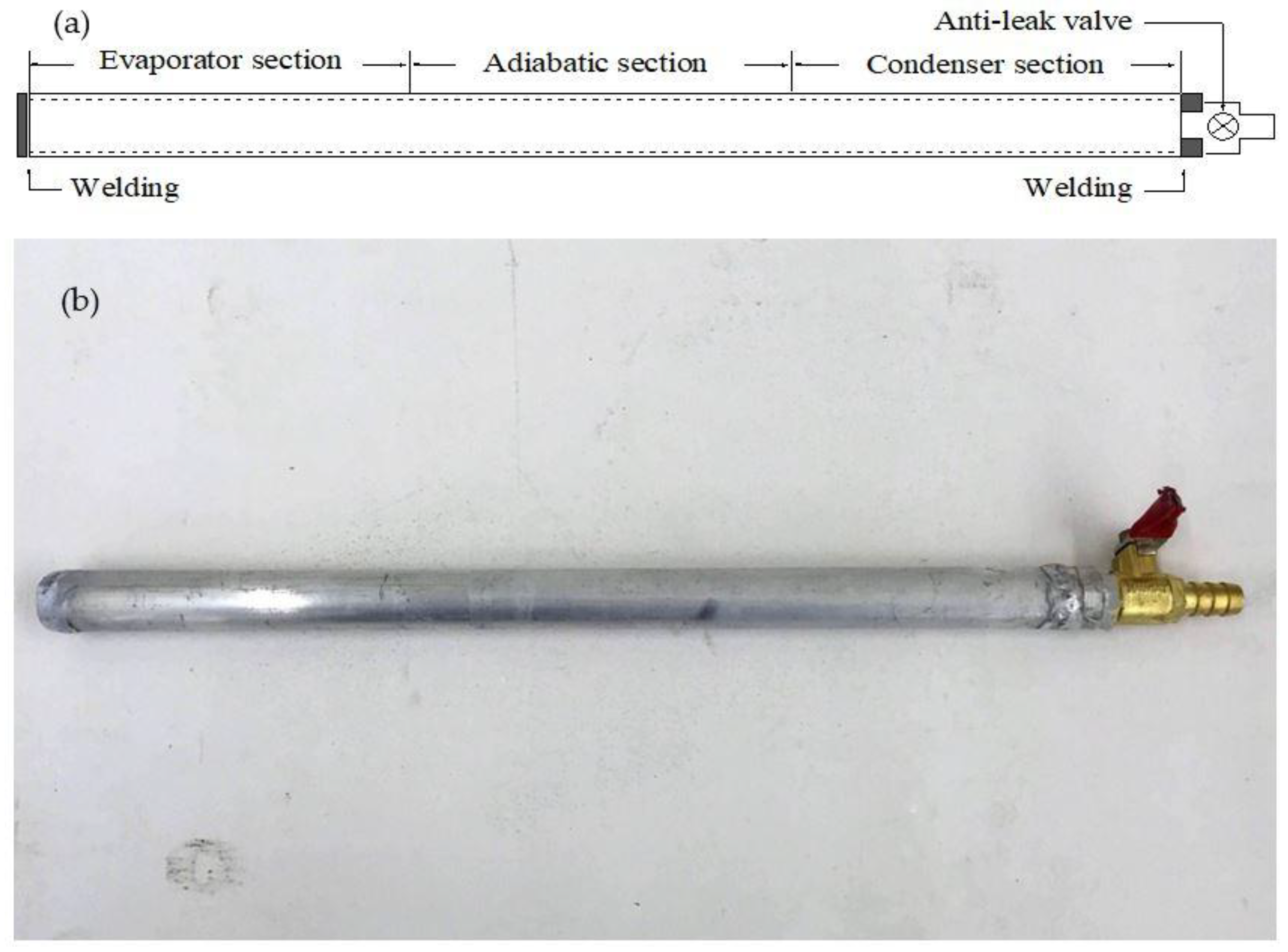 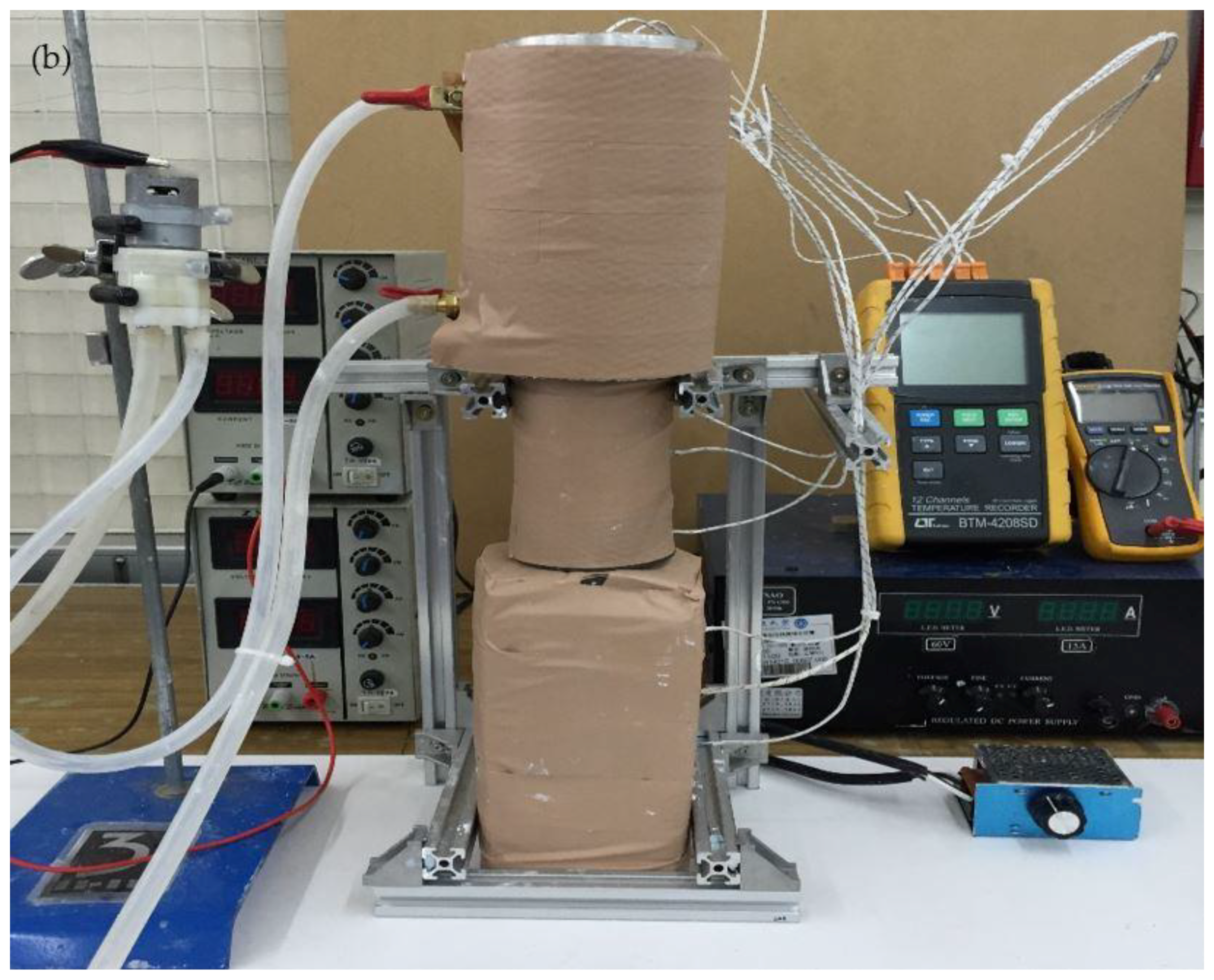