Consumption of Atlantic Salmon Smolt by Striped Bass: A Review of the Predator-Prey Encounter Literature and Implications for the Design of Effective Sampling Strategies
Previous Article in Journal

In Vitro Effects of Bisphenol A and Tetrabromobisphenol A on Cell Viability and Reproduction-Related Gene Expression in Pituitaries from Sexually Maturing Atlantic Cod (Gadus morhua L.)

Freshwater fish represent half of all fish species and are the most threatened vertebrate group. Given their considerable passion and knowledge, aquarium hobbyists can play a vital role in their conservation. CARES is made up of many organizations, whose purpose is to encourage aquarium hobbyists to devote tank space to the most endangered and overlooked freshwater fish to ensure their survival. We found the CARES priority list contains nearly six hundred species from twenty families and two dozen extinct-in-the-wild species. The major families were typically those with the largest hobbyist affiliations such as killifish, livebearers, and cichlids, the latter containing half of CARES species. CARES included every IUCN threatened species of Pseudomugilidae and Valenciidae, but only one percent of threatened Characidae, Cobitidae, and Gobiidae species. No Loricariidae in CARES were in the IUCN red list as they have not been scientifically described. Tanzania and Mexico contained the largest amount of species, with the latter containing the most endemics. Many species were classified differently than the IUCN, including a third of extinct-in-the-wild species classified as least concern by the IUCN. This vast disconnect exemplifies the importance of future collaboration and information exchange required between hobbyists, the scientific community, and conservation organizations.
Keywords: aquarists; aquarium trade; captive-breeding; IUCN red list; ornamental fish; threatened fish; undescribed species aquarists; aquarium trade; captive-breeding; IUCN red list; ornamental fish; threatened fish; undescribed species

The CARES priority list contained 572 freshwater species in 20 different family groups with 30 species classified as extinct-in-the-wild. The priority list was overrepresented by Cichlidae with 47% of all CARES species (268), which also made up over half of the extinct-in-the-wild species (17) (Table 1). The families representing the highest proportion of the total IUCN threatened and data deficient species were Pseudomugilidae and Valenciidae, where all species were represented, and Goodeidae and Aplocheilidae with over 80% of the total threatened and data deficient species in the IUCN (Table 1). Approximately two-thirds (383) of the species were found in the IUCN red list, 82% (471) were in fishbase.org database, while 14% (85) were not found in either database (Table 1). The group with the highest proportion of unclassified species not identified in any database was Loricariidae with 58.6% (17), Cichlidae with 22.8% (61) and Aplocheilidae with 15.4% (2) (Table 1).
Of those species in the IUCN, 64 (16.7%) species were classified differently than the IUCN, with seven species labeled least concern and that CARES classified as extinct-in-the-wild (Figure 1). Due to some species classified differently by CARES, Anabantidae had more threatened species than were classified as threatened in the IUCN (Table 1). None of the 29 Loricariidae species were found in the IUCN red list, while only 1% of threatened Characidae, Cobitidae, and Gobiidae species were in CARES (Table 1). The greatest number of species came from East Africa, Mexico, Brazil, Southeast Asia (Figure 2a), specifically Tanzania (118), Mexico (78), Madagascar (66), Kenya (61) and Uganda (60) (Figure 2a). The greatest number of endemics were from Mexico (76, 17.5%) and Madagascar (65, 15%), followed by Tanzania (47, 11%), Brazil (43, 9.9%), and Indonesia (42, 9.7%) (Figure 2b).

The CARES priority list was downloaded from https://caresforfish.org on 21 May 2019, which included nomenclature and risk classification from IUCN and CARES authorities. Fish species data was downloaded from the IUCN red list to compare classification risk and determine what groups are well represented [19]. We used the “rfishbase” package [25] in R version 3.6.0 [26] to find species that could not be found in the IUCN red list by searching for synonyms and other possible names, as well as find the countries and regions the species are found. This package accesses the fishbase database (http://www.fishbase.org) which describes ecology and biology of the over 30,000 known fish species. We also accessed online databases such as Cat-eLog (https://www.planetcatfish.com/catelog/), seriouslyfish (https://www.seriouslyfish.com/), and the Goodeid Working Group database (http://www.goodeidworkinggroup.com/) to find information of CARES species still not found in the previous databases.

The authors would like to dedicate this publication to Dr. Raydora Drummer Francis for her contributions and support to minority students in the STEM fields. We thank her for helping us and so many others successfully navigate through our academic and personal lives while inspiring us to become the people we are today. We also wish to thank John Gould for his wonderful work proof-reading and editing. 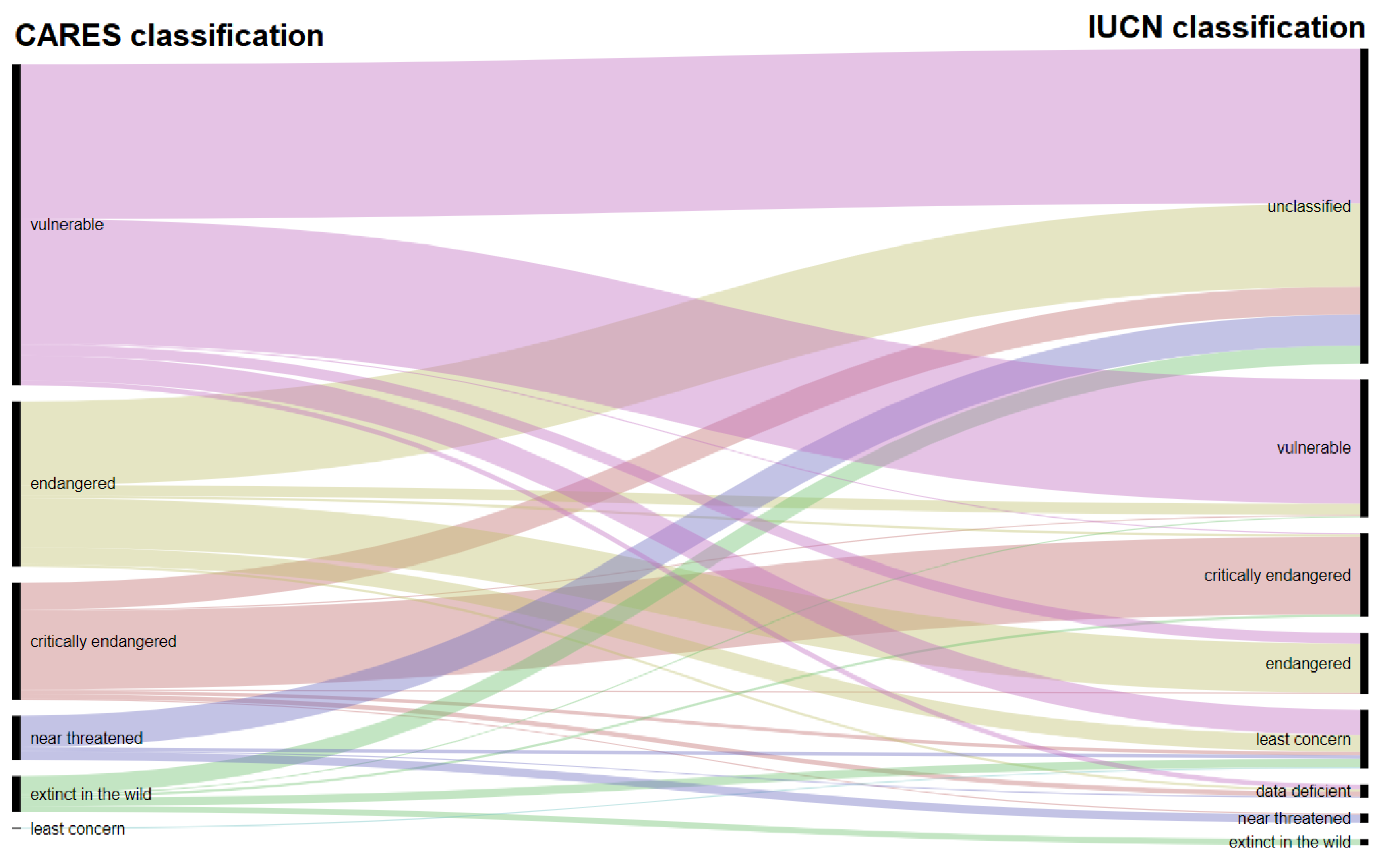 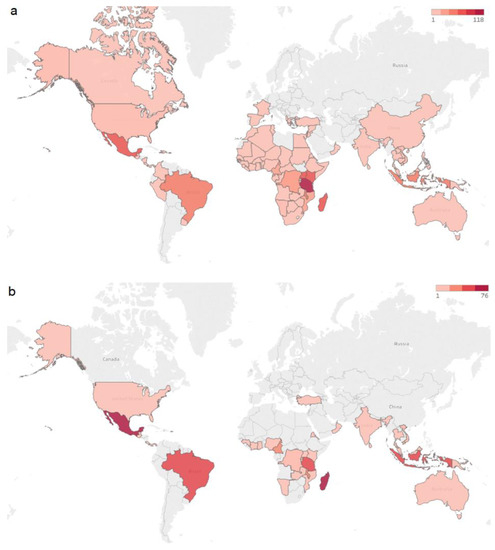 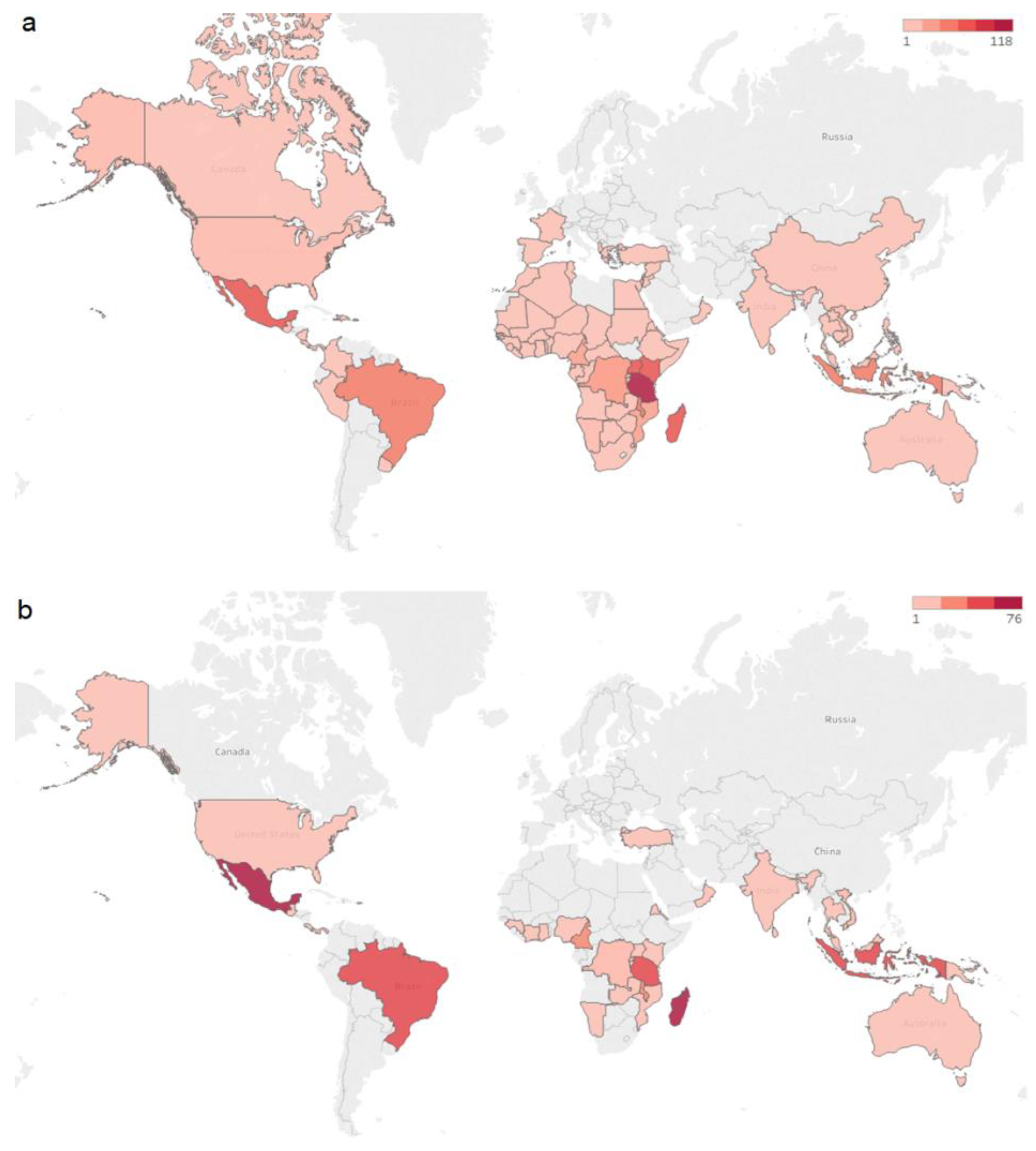