Does Addition of Perch Larvae as Prey Affect the Growth, Development and Cannibalism Rate of Pikeperch Larvae?
Next Article in Special Issue

In Vitro Effects of Bisphenol A and Tetrabromobisphenol A on Cell Viability and Reproduction-Related Gene Expression in Pituitaries from Sexually Maturing Atlantic Cod (Gadus morhua L.)
Previous Article in Journal

Ionic homeostasis is an essential component of functioning cells, and ionic stress imposed by excessive salinity can disrupt cellular and physiological processes. Therefore, increasing salinity of aquatic environments—a consequence of global climate change—has the potential to adversely affect the health of aquatic animals and their ecosystems. The ability to respond adaptively to adverse environmental changes is essential for the survival of species, but animals in early embryonic stages may be particularly vulnerable, as they cannot easily escape from such conditions. Herein, the effects of increasing salinity on the mortality and hatching time of zebrafish (Danio rerio) embryos were investigated. Increasing salinity significantly affected mortality after 24 h of exposure beginning from <2 h post-fertilisation, with 10 parts per thousand (ppt) inducing complete lethality. The 24-h LC50 of NaCl to embryos was estimated to be approximately 5.6 ppt. Interestingly, 5 ppt, a test concentration only slightly lower than the LC50, induced earlier hatching than at lower concentrations. This earlier hatching was also observed even when exposure was commenced at later stages of embryogenesis, despite later-stage embryos not suffering appreciable mortality in response to salinity. The results suggest that earlier hatching is a plastic response which may function to enable embryos to evade unfavourable conditions.
Keywords: zebrafish; embryos; salinity; ionic stress; hatching; LC50 zebrafish; embryos; salinity; ionic stress; hatching; LC50

Salinity is an important feature of aquatic environments, and maintaining ionic homeostasis is crucial for optimal function of cellular and physiological processes [1]. Ionic stress, induced by increases in salinity, therefore has the potential to disrupt these processes. Increasing the salinity of freshwater environments is exacerbated by rising sea levels as a consequence of global climate change [2] and by road salt run-off [3], and poses an important threat to aquatic ecosystems. For instance, a long-term monitoring study found that salt concentrations of freshwater streams in Milwaukee, USA, frequently exceed 1000 mg/L (1 ppt) and extended to nearly 7000 mg/L (7 ppt) during road salt application periods in February–March, a range which included concentrations that were lethal to adult fathead minnows in a chronic bioassay [4]. Freshwater habitats face an additional source of increased salinity in the form of saltwater intrusion as a consequence of intensive aquaculture, which is especially prominent in southeast Asia as a consequence of intensive shrimp farming [5]. Therefore, it is important to characterise the potential effects of increasing environmental salinity on aquatic organisms.
Fully-developed animals are able to respond adaptively to unfavourable chemical environments via physiological or behavioural responses (e.g., escaping from the adverse environment), however, animals at earlier stages of development—particularly embryos—may be far more sensitive to adverse environments. Osmoregulation in teleost fishes is carried out by the coordination of several organs and organ systems (e.g., gills, kidneys, urinary system), but these structures are not differentiated in early embryos, which instead rely on ion pumping activity by ionocytes covering the skin [6]. Importantly, developing embryos are immobile while confined to the egg casing and thus cannot easily escape from unfavourable conditions as adult animals can.
The zebrafish (Danio rerio), a freshwater fish, is an ideal model system for the effects of physiological stress on the early embryo, given that their eggs are fertilised externally and can be easily observed throughout early development. Their rapid development into free-swimming larvae within the first five days of life also makes them suitable for high-throughput experiments. Zebrafish are thought to be tolerant to a range of salinities in their natural environments, which have been recorded to range from 0.1–0.6 ppt, thus technically extending to brackish conditions (>0.5 ppt) [7]. However, this tolerance range has not been well-characterised. Increasing rearing salinity has previously been shown to induce higher mortality on the embryos of non-marine fish, including zebrafish [8,9] and medaka [10], but the propensity of embryos for plastic responses under ionic stress conditions has not been investigated. One such trait which may be subject to plasticity is hatching—an important life history event in egg-laying species which exhibits plasticity in response to biotic and abiotic stress [11]. In zebrafish, hatching time is mostly determined by the rate of development (largely controlled by temperature [12]), but can also be influenced by light regimes, suggesting a role of circadian chemistry in the regulation of hatching [13]. Overall, however, hatching plasticity has not been extensively studied in zebrafish and has not been evaluated in the context of salinity.
This study first aimed to (1) characterise the effect of salinity on the mortality of zebrafish embryos; and (2) assess the effects of different salt concentrations on the timing of hatching.

Adult London wildtype zebrafish were maintained in a UK Home Office approved facility in the Department of Animal and Plant Sciences, University of Sheffield. The collection of embryos from adult zebrafish was carried out under the UK Home Office project license number 40/3704. As no NaCl exposures were carried out on animals older than 5 days post-fertilisation and no exposed embryos were kept beyond 5 dpf, the exposure of embryos in the experiment did not comprise a regulated procedure as specified under the Animals (Scientific Procedures) Act (1986), and thus did not require specific approval.
Embryos were derived from adult London wildtype Danio rerio which were reared and housed on a recirculatory system with water heated to approx. 26 °C. Animals were fed twice daily with live Artemia nauplii or commercial flake food. Egg collection dishes filled with marbles were placed in mixed sex tanks at approx. 1600 and were collected the following morning. Three clutches of fertilised eggs were derived from three separate sets of mixed-sex adult zebrafish, and each clutch was considered to be a biological replicate. Although the exact time of fertilisation could not be determined, zebrafish typically spawn at first light [17], which was between 08.00 and 08.30 in the aquarium where the present study was carried out. At less than 2 h post-fertilisation (before 10.00), four sets of 30 embryos at the 4–64-cell stage (identified under light microscope) were taken from each clutch and were placed in lidded 90 mm petri dishes containing each of the four salt concentrations (0.2, 2, 5, and 10 parts per thousand). The lowest was 0.2 ppt, as this was the salinity of aquarium water with no additional salt. Higher concentrations were prepared by dissolving ‘Instant Ocean’ salt in aquarium water and concentrations were checked using a digital salinity meter. Embryo dishes were kept in a temperature-controlled room at 25 °C on a 12:12 light/dark cycle, and were checked for mortality and hatching after 24, 48, and 72 h of exposure.
For the experiments in which embryos were exposed to increased salinity at later developmental stages, embryos were collected in the same manner as described above, again with each set of embryos deriving from a separate set of adult zebrafish. Marbles were removed from the egg collection dishes and water was changed, and embryos remained in these dishes until being transferred to petri dishes for exposure to either 0.2 or 5 ppt NaCl. For one experiment, embryos were transferred at approx. 4 hpf (around 12.00 on day of egg collection), while for another experiment they were transferred at 24 hpf. The mixed model fit to this data did not reveal a significant effect of the experiment on the response variable (F1,13.9 = 2.6, p = 0.13).
Graphical generation and statistical analyses were carried out in ‘R’ version 3.5.1 [18]. The generalised linear model for 24-h mortality was fitted using the glm function from the ‘stats’ package and LC50 value predicted form the model using the predict function from the same package. Mixed effects models fit using the lmer function from the ‘lme4′ package [19] were used to model the interaction between concentration and time on hatching, with ‘Dish ID’ entered as a random factor. For the analysis of hatching data of later stage embryos, time was included as a second-degree polynomial (quadratic) term. Model results were derived using the summary and anova functions with significance values (t-tests and F-tests with Kenward Roger approximation of degrees of freedom) obtained using the ‘lmerTest’ [20] and ‘pbkrtest’ [21] packages. Curve fits shown in Figure 2 were derived using the ‘effects’ package [22] and a linear mixed model.

J.O. was supported by a PhD scholarship from the University of Sheffield.

The author wishes to thank Allison Blake and Lynsey Gregory for care and maintenance of zebrafish stocks, and Penelope J. Watt for supervision of the research programme. 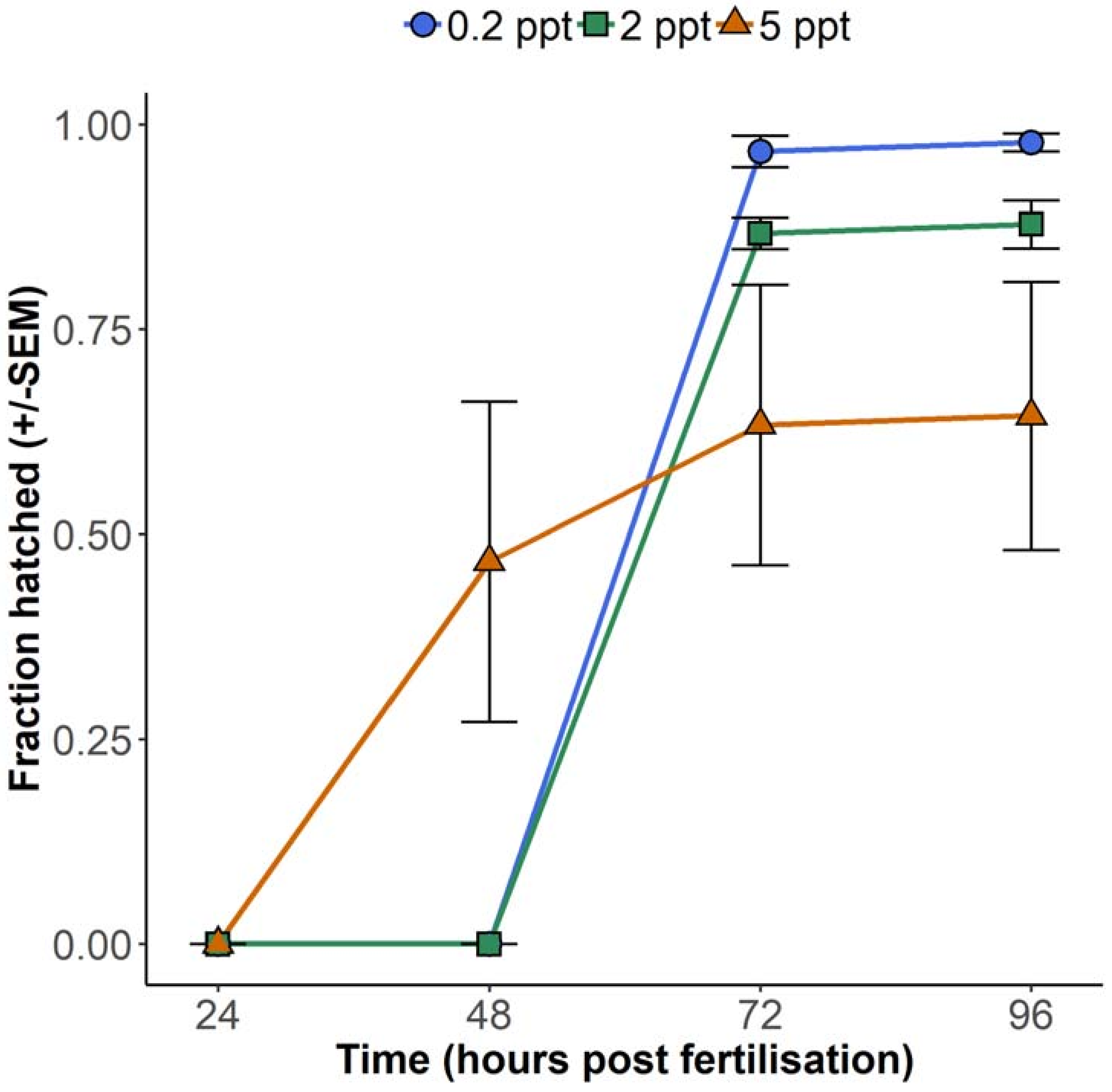