Anja B. Kristoffersen
3 and

The skin mucus of fish is in permanent contact with the aquatic environment. Data from the analysis of the chemical composition of skin mucus could potentially be used for monitoring the health status of the fish. Knowledge about mucus composition or change in composition over time could also contribute to understanding the aetiology of certain diseases. The objective of the present study was the development of a workflow for non-invasive sampling of skin mucus from farmed salmon (Salmo salar) for the targeted and untargeted detection of small metabolites. Skin mucus was either scraped off, wiped off using medical wipes, or the mucus’ water phase was absorbed using the same type of medical wipes that was used for the wiping method. Following a simple filtration step, the obtained mucus samples were subjected to hydrophilic interaction chromatography coupled to high-resolution mass spectrometry. Post-acquisition processing included the targeted analysis of 86 small metabolites, of which up to 60 were detected in absorbed mucus. Untargeted analysis of the mucus samples from equally treated salmon revealed that the total variation of the metabolome was lowest in absorbed mucus and highest in the scraped mucus. Thus, future studies including small-molecule metabolomics of skin mucus in fish would benefit from a sampling regime employing absorption of the water phase in order to minimize the bias related to the sampling step. Furthermore, the absorption method is also a less invasive approach allowing for repetitive sampling within short time intervals. View Full-Text
Keywords: skin mucus; salmon; sampling regime; metabolomics; Salmo salar skin mucus; salmon; sampling regime; metabolomics; Salmo salar
►▼ Show Figures 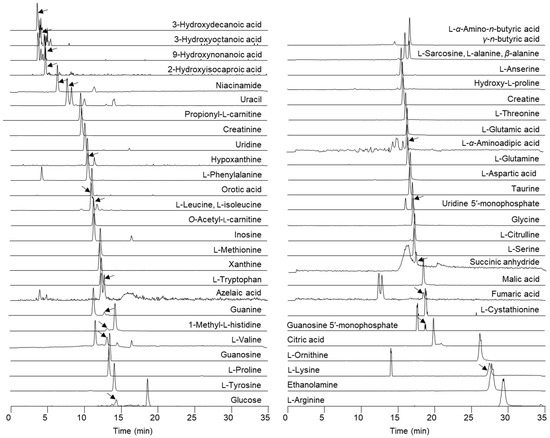