From Reflex to Reflection: Two Tricks AI Could Learn from Us
Next Article in Special Issue

Artificial Pain May Induce Empathy, Morality, and Ethics in the Conscious Mind of Robots
Previous Article in Journal

In this article, an enactive architecture is described that allows a humanoid robot to learn to compose simple actions into turn-taking behaviours while playing interaction games with a human partner. The robot’s action choices are reinforced by social feedback from the human in the form of visual attention and measures of behavioural synchronisation. We demonstrate that the system can acquire and switch between behaviours learned through interaction based on social feedback from the human partner. The role of reinforcement based on a short-term memory of the interaction was experimentally investigated. Results indicate that feedback based only on the immediate experience was insufficient to learn longer, more complex turn-taking behaviours. Therefore, some history of the interaction must be considered in the acquisition of turn-taking, which can be efficiently handled through the use of short-term memory. View Full-Text
Keywords: human–robot interaction; turn-taking; developmental robotics human–robot interaction; turn-taking; developmental robotics
►▼ Show Figures 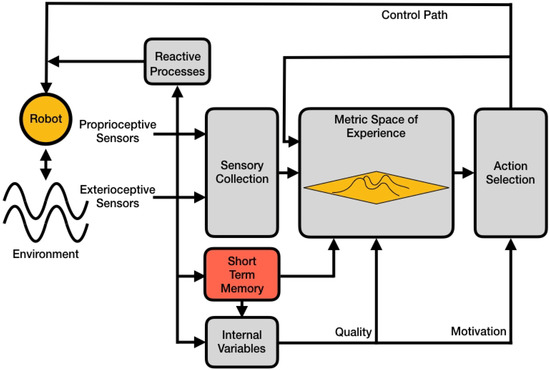