This study was aimed to extract rosmarinic acid from Orthosiphon stamineus Benth. (Lamiaceae) in high yield. The mixture of chloroform–ethyl acetate (70:30) was chosen as the solvent system because rosmarinic acid gave the lowest solvation free energy in that solvent system based on the computational solubility prediction. The crude extract of the plant was fractionated by C18 reversed phase absorbent to recover rosmarinic acid. The content of rosmarinic acid was increased from 4.0% w/w to 6.7% w/w after fractionation. The radical scavenging activity of rosmarinic acid rich fraction (IC50 = 38.3 μg/mL) was higher than the crude extract (IC50 = 58.85 μg/mL) based on the DPPH assay. Several phytochemicals were also identified based on the detection of fragment ions of target compounds. Fractions 1 to 3 could be combined to be a rosmarinic acid rich fraction. Simultaneously, the combination of fractions 4 to 6 could obtain a plant fraction rich in rosmarinic acid, sinensetin and eupatorin, whereas fractions 7 to 9 could be combined as a sinensetin rich fraction. The preparation of known phytochemical profile of O. stamineus fraction is highly required for value added product formulation and pharmacological studies, particularly for anti-diabetes and kidney related diseases which had previously been reported attributed to this herbal plant. This is the first study using solvation free energy to predict the suitable solvent system for rosmarinic acid extraction from highly complex herbal sample using the technology of solid phase extraction. The use of solvation free energy simulation is convenient and reliable before wet experiments for time and cost saving.
Keywords: Orthosiphon stamineus; radical scavenging activity; solvation free energy; fragment ions; solid phase extraction Orthosiphon stamineus; radical scavenging activity; solvation free energy; fragment ions; solid phase extraction

Orthosiphon stamineus Benth. is a plant of genus Orthosiphon in the family Lamiaceae, which is widely used in traditional remedy to improve general health, treatment of kidney diseases, bladder inflammation, gout and diabetes in South East Asia countries [1]. The pharmacological effects of the plant might be due to the presence of several dominant phytochemicals such as terpenoids, polyphenols and sterols [2]. The phytochemicals of O. stamineus are mostly from the class of polyphenol (rosmarinic acid, caffeic acid and cichoric acid), flavonoid (sinensetin and eupatorin) and terpenoids (orthosiphol A–Z) [3].
Phytochemicals are also known as plant secondary metabolites, which are important for plant defensive system and possess important biological activity, including antioxidant activity [4]. The phenolic compounds with antioxidant property can scavenge free radicals such as hydroxyl and superoxide anion, as well as chelate metal ions [5]. The natural antioxidants from plants show the potentials in human health protection, as well as food preservatives and additives [5]. Rosmarinic acid is one of the antioxidative plant phenolics which can be abundantly found in Lamiaceae species [5]. O. stamineus was reported to have rosmarinic acid up to 53 mg/g extract [6].
Owing to the importance of rosmarinic acid in many pharmacological applications, O. stamineus extract was fractionated using solid phase extraction (SPE) in order to obtain a rosmarinic acid rich fraction with high antioxidant activity. The solvent system of fractionation was chosen based on the previous studies and computational solubility prediction for high yield of rosmarinic acid recovery. The chemical characteristics of this rosmarinic acid rich fraction were also evaluated in terms of the total phenolic content, total flavonoid content and antioxidant capacity compared to the crude extract of O. stamineus. Several target phytochemicals were also identified using high sensitivity analytical tool of LC-MS/MS. This technique is highly reliable and accurate without the use of standard chemical in compound identification.

The reflux extraction was carried out by using 70% ethanol with a solid to solvent ratio of 1:9.14 at 56.5 °C for 3 h according to the previously optimized parameters [7]. The extract was filtered and concentrated by a rotary evaporator (Heidolph, Laborota 4003, Germany) at 60 °C and further dried at 50 °C in an oven.

The solubility of rosmarinic acid was predicted using solvation free energy in order to select the appropriate solvent system for the fractionation process. Several types of mobile phases, namely, ethyl acetate, chloroform, methanol, acetic acid and formic acid were used for the pre-screening process based on the lowest solvation free energy. The solvents which were selected for the pre-screening process were sourced from previous researchers who had carried out fractionation using SPE from different types of plant species [8,9,10,11]. The calculation of solvation free energy for rosmarinic acid in different solvents was performed computationally by Forcite Package in Material Studio 7.0 (Accelrys Inc., San Diego, CA, USA).

Solid phase extraction (SPE) was applied for the fractionation of O. stamineus crude extract by using a C18ec cartridge (6 mL/500 mg, Chromabond, Macherey-Nagel GmbH & Co., DUren, Germany). The pre-conditioning of SPE cartridge was performed by using methanol (6 mL), followed by equilibration with 6 mL acidified water (0.5% formic acid). One milliliter of crude extract solution (25 mg/mL) was then loaded onto the SPE cartridge. Nine fractions were collected from the SPE cartridge, where the fractions 1–8 were collected by eluting 0.2 mL of chloroform–ethyl acetate mixture in a ratio of 30:70, and fraction 9 was collected by eluting 1.0 mL of methanol for washing purpose. The collected fractions were dried at 40 °C by using an IR concentrator equipped with cold trap system (Micro-Cenvac NB 503CIR, N-BIOTEK Co. Ltd., Korea).

The free radical scavenging activity of crude extract and its fractions from O. stamineus were evaluated using DPPH (2,2-diphenyl-1-picrylhydrazyl, Sigma-Aldrich, St. Louis, MO, USA) assay. The extracts were prepared at different concentrations ranging from 10 to 250 ppm. A 0.5 mL sample solution was mixed with 3.5 mL DPPH methanolic solution (0.1 mM). The samples were then allowed to stand for 30 min at room temperature in a dark place. Control was prepared by substituting the extract solution with 0.5 mL methanol. The absorbance was measured at 517 nm using an UV-Vis spectrophotometer. Ascorbic acid (≥99.5%), rosmarinic acid (≥98%)and rutin (≥94%) which were purchased from Sigma-Aldrich, USA were used as positive control. The antioxidant activity of sample was expressed as IC50, which is estimated at 50% inhibitory activity from the plot of inhibition against sample concentration.

The phytochemicals profile of the crude extract and fractions were analyzed using a liquid chromatography (Ultimate 3000) system equipped with a diode array detector (Dionex, Thermo Scientific; MA, USA) and a C18 reversed phase column (2.1 × 100 mm, 2.5 µm, XSelect High Strength Silica, Waters; Milford, MA, USA). The separation was performed using a mobile phase consisted of 0.1% formic acid in water (A) and acetonitrile (B) with a gradient elution at the flow rate of 150 µL/min: 0–10 min, 10% B; 10–25 min, 10–80% B; 25–30 min, 80% B; 30–35 min, 10% B [13]. The standard solution of rosmarinic acid was prepared in a serial concentration from 0.2 to 1.0 ppm for quantitation. Compounds were detected at 254 nm. All samples were filtered with 0.22 µm nylon filter prior to injection. Duplicate experiments were performed.

The targeted phytochemicals were identified by an ultra-performance liquid chromatography (UPLC, Waters Acquity; Milford, MA, USA) system coupled with a triple quadrupole-linear ion trap tandem mass spectrometer (Applied Biosystems 4000 QTRAP; Life Technologies Corporation, Carlsbad, CA, USA). A C18 reversed phase Acquity column (2.1 × 150 mm, 1.7 µm) was used for compound separation. Both positive and negative modes of multiple reaction monitoring with the published transition ions were used for compound identification (Table 1).
The capillary and voltage of electrospray ionization source of mass analyzer were maintained at 400 °C and 5.5 kV (positive mode) or –4.5 kV (negative mode), respectively. The other parameters were set as follows: nitrogen was used as ion source gas for nebulization, 40 psi; for drying solvent, 40 psi; curtain gas, 10 psi; collision gas, high; collision energy, 25 to 55 eV; dwell time, 0.3 s and declustering potential, 40 V (positive mode) or –50 V (negative mode). Data acquisition and data processing were performed using Analyst 1.4.2.
The mixture of 0.1% formic acid in water (A) and acetonitrile (B) was used as mobile phases [13]. The separation was performed in a gradient elution with the following condition; 0–10 min, 10% B; 10–12 min, 10–90% B; 12–14 min, 90% B; 14–15 min, 10% B at the flow rate of 0.2 mL/min and the injection volume of 5 µL. All samples were filtered using nylon membrane (0.2 µm) prior to injection. Duplicate experiments were performed.

The total phenolic content (TPC) and total flavonoid content (TFC) of crude extract and its fractions are illustrated in Figure 2. The figure clearly shows that TPC was about 2 to 10 times higher than TFC for all fractions. The TPC of O. stamineus fractions varied from 1.97 to 3.06 mg GAE/100 g extract, whereas the TFC ranged from 0.23 to 1.62 mg RE/100 g extract in a bell shape curve from fractions 1 to 9.
The ratio of TPC to TFC is presented in a “S” shape curve from fractions 1 to 9 in line with the concentration of rosmarinic acid (Figure 3). Rosmarinic acid seems to be the most abundant phenolic acid in O. stamineus. A sudden increase of rosmarinic acid content in fraction 9 was also increased the TPC/TFC ratio. This was because the remaining rosmarinic acid and other phenolic acids were rinsed out from the SPE cartridge by strong solvent, methanol.
The antioxidant activity of O. stamineus extract and its fractions were evaluated in term of free radicals scavenging activity and expressed in IC50. This IC50 explains the concentration of sample required to exhibit 50% of inhibition against free radicals. The phytochemicals with antiradical property could scavenge free radicals by donating protons. Rosmarinic acid could act as a potent radical scavenger, most probably because of proton donator characteristics. It has five hydroxyl groups in the molecular structure which may contribute protons to scavenge free radicals of DPPH [23].
The TPC/TFC ratio is closely correlated to the concentration of rosmarinic acid which is also highly linked to the IC50 of the fractions in the antioxidant assay as presented in Table 2. Hence, the TPC/TFC ratio could also be used to explain the scavenging activity of the fractions, mainly contributed by the presence of rosmarinic acid. This can be seen from lower IC50 values of fractions 1 to 3 with higher content of rosmarinic acid in those fractions. The increase of IC50 values in other fractions was also followed by the decrease of rosmarinic acid content.
In the present study, the standard chemicals of rosmarinic acid, ascorbic acid and rutin were used as positive control (Table 2). The results revealed that the scavenging capacity of rosmarinic acid and ascorbic acid were comparable because both standard chemicals showed almost similar IC50 values (~15 µg/mL). However, the scavenging capacity of rutin was about 3 times lower than rosmarinic acid. Therefore, rosmarinic acid was the main contributor to the high TPC/TFC ratio and high scavenging capacity of O. stamineus fraction in a linear relationship.

The authors would like to thank Research Management Center, Universiti Teknologi Malaysia for giving postdoctoral position for C.H.L. 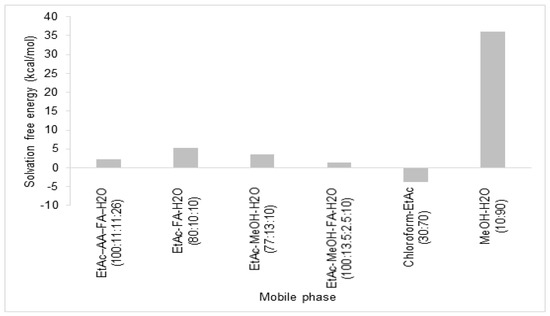 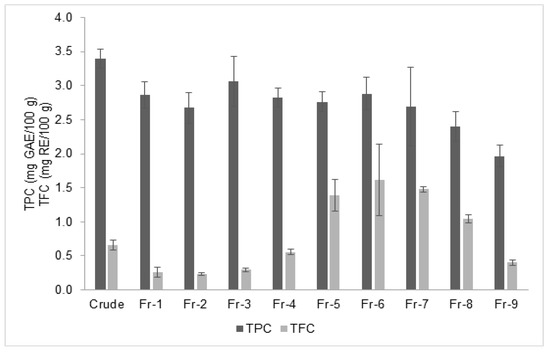 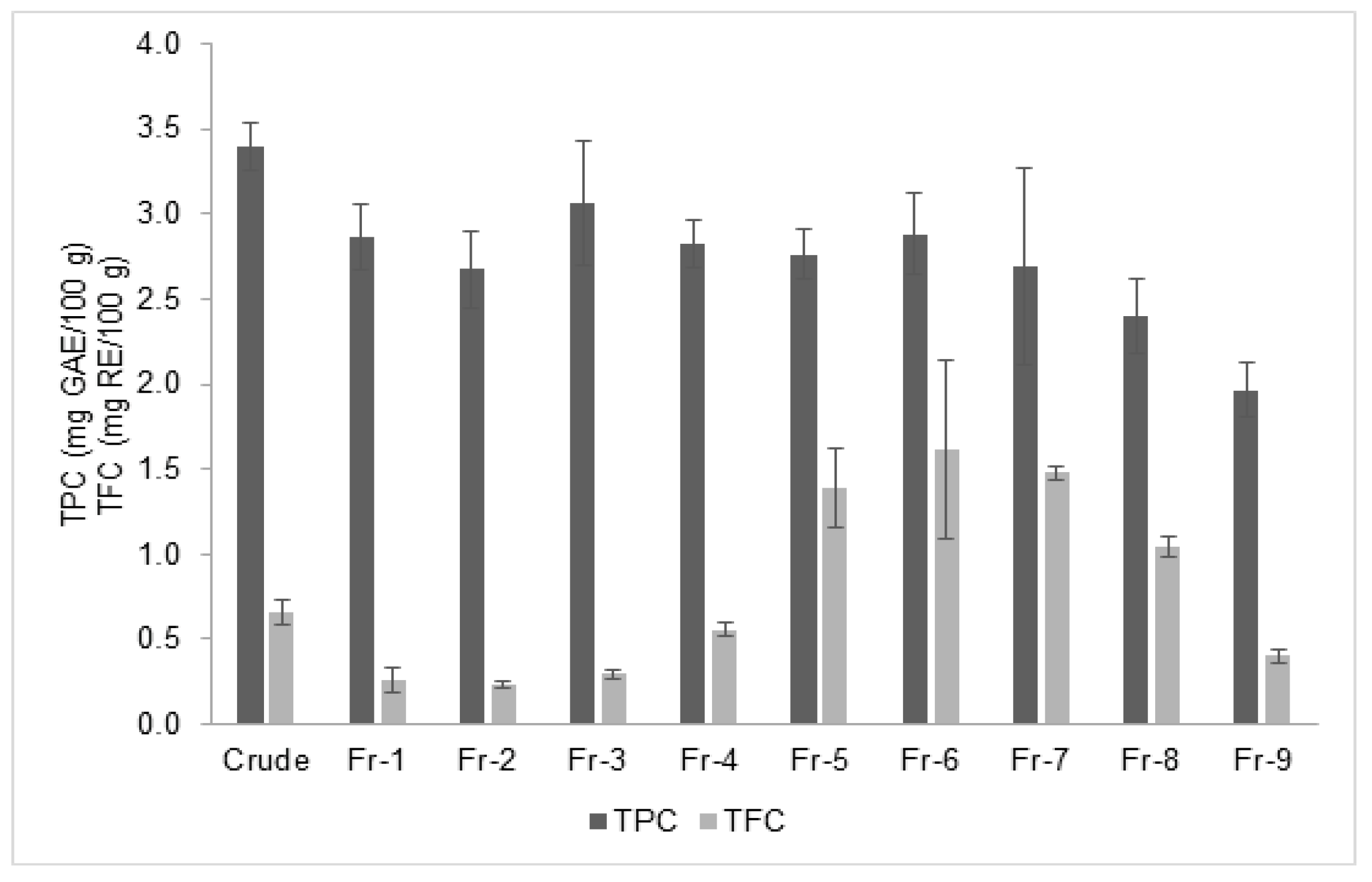 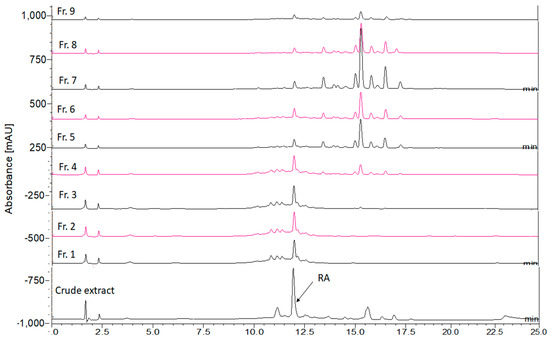 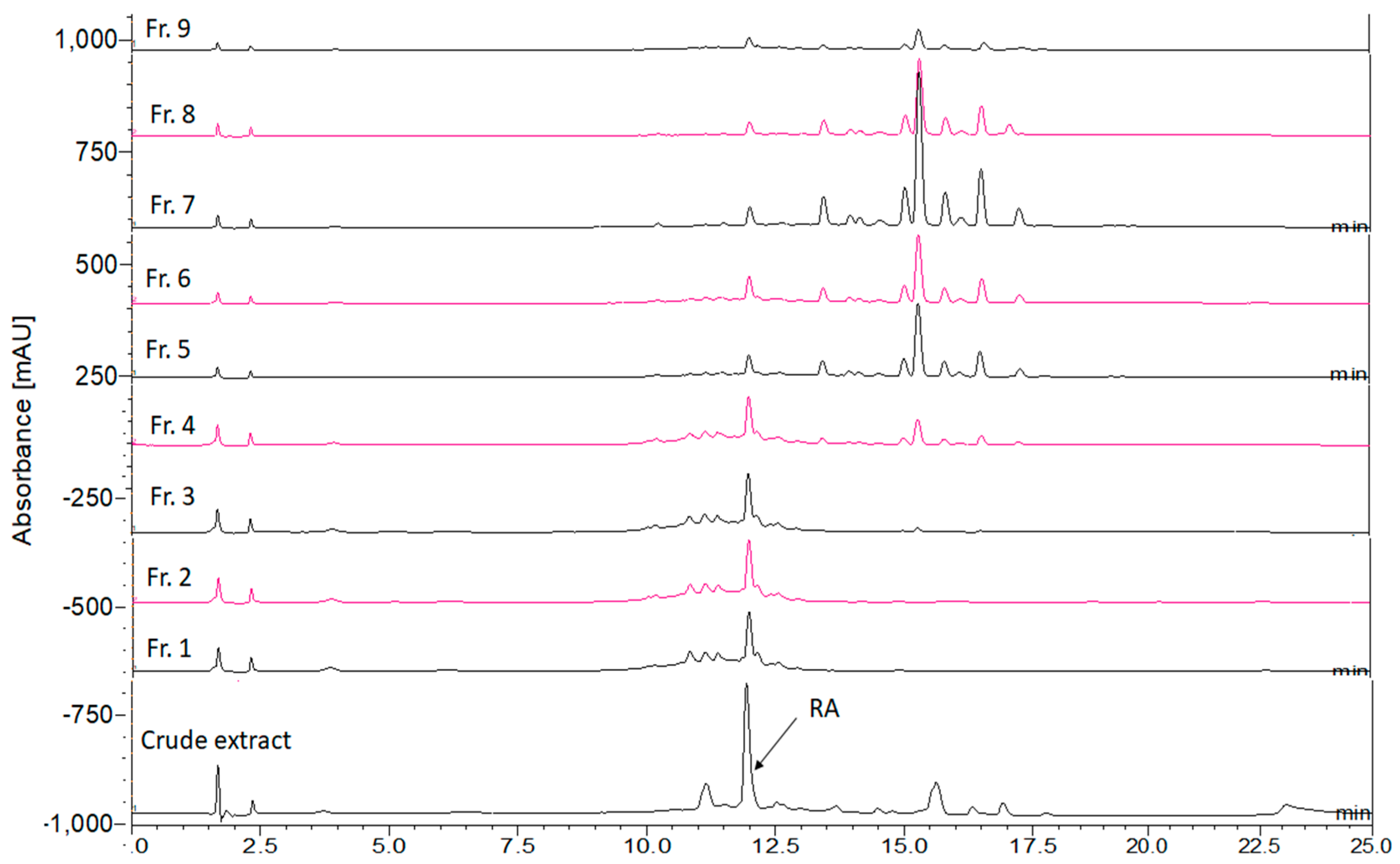