The Combined Impact of CLIR Post-Analytical Tools and Second Tier Testing on the Performance of Newborn Screening for Disorders of Propionate, Methionine, and Cobalamin Metabolism
Previous Article in Journal

:
Georgia uses post-analytical tools through Collaborative Laboratory Integrated Reports (CLIR) to triage abnormal newborn screening (NBS) results for follow-up. Condition specific tools are used to assign each case a risk level, which is used to guide follow-up recommendations. Follow-up recommendations include assessment by the child’s primary care provider as well as testing, either a repeat NBS or confirmatory testing. Triaging abnormal cases using these tools has been advantageous in managing the workflow for the follow-up team, as well as prioritizing cases that appropriately require more attention and resources. The initial goal in utilizing these tools was to reduce the amount of confirmatory testing, particularly for disorders where there are many false positives. We assessed the performance of these tools retrospectively for three of the most commonly detected conditions by tandem mass spectrometry in Georgia: phenylketonuria, medium chain acyl-CoA dehydrogenase deficiency and very long chain dehydrogenase deficiency. The post-analytical tools appropriately assigned all true positive cases to the higher levels of follow-up testing and reduced the level of intervention for a significant number of cases as well. Based on the experience gained from our utilization of the tools in the follow-up program, we are well situated to move forward with using the tools in a more prospective manner, and reduce the number of cases that will be reported, rather than just assigning resources appropriately at follow-up. Post-analytical tools are an improvement over trying to capture the variation in the newborn population using multiple cutoffs. It also easily identifies significant abnormalities that are unrelated to inherited disease, such as large amino acid elevations due to total parenteral nutrition.
Keywords:
newborn screening; newborn screening follow-up; post-analytical tools; performance improvement

To evaluate the effectiveness of the current post-analytical tools for the triage of NBS results, we retrospectively extracted from our follow-up database all positive screens for four conditions: Phenylketonuria (PKU), maple syrup urine disease (MSUD), MCAD deficiency, and VLCAD deficiency for a 14-month period (04/01/2018–06/01/2019). These conditions were selected because they are among the most common detected by tandem mass spectrometry in Georgia, and enough screens and true positive (TP) cases were available for comparison. There were no TP cases of MSUD during the study period, however it was included in the population of screen positives as it is a large contributor of FP screens from tandem mass spectrometry (MS/MS) testing. From our database we extracted the data from the initial NBS, the outcome of the case, and whether the outcome was obtained from a repeat NBS or confirmatory testing. We also identified the post-analytical tool results (including DSP results for VLCAD screens) utilized by the follow-up team at the time of the initial triage. As new cases are added to the CLIR database constantly, identifying the CLIR results that were used at the time was important for accurate evaluation. The design of this study was reviewed and approved by the Georgia Department of Public Health Institutional Review Board.

Post-analytical tools have been beneficial for the NBS follow-up program in Georgia. When utilized for follow-up purposes in the three disorders selected for this study, all TP cases had an informative score with the appropriate post-analytical tool. This allowed for prompt follow-up testing, and correct usage of repeat NBS to resolve cases with a lower likelihood of being a TP. Importantly, this has provided evidence that CLIR’s tools appropriately identified cases that required follow-up attention. CLIR does not underestimate results, making it unlikely that a TP will be missed if it would have been identified using appropriately set cutoffs. Examination of these screens retrospectively has demonstrated that screens with multiple mild abnormalities introduce a disproportionate amount of FP results into the NBS system, and post-analytical tools can be an effective filtering method. For the three conditions included in this study, no confirmed abnormal results were on complex screens (defined as those abnormal for less than one condition detected by MS/MS). In many cases, there will be logical patterns to complex screens in true abnormals (multiple long chain acylcarnitine elevations can be present), and profiles typical of “complex FPs” can also be identified. Post-analytical tools can account for these FP screens, however additional granularity may be helpful, as not all FP results are the same. In particular, the common FP profiles for LBW infants differ from NBW infants, as seen by the differences in performance with complex screens in this study, and in the results obtained using post-analytical tools in each cohort.
The utilization of post-analytical tools in Georgia has allowed for effective triage of results, reduced the amount of confirmatory testing needed, standardized the communication of NBS results with providers and given a path forward for the implementation of these tools earlier in the screening process. These tools have provided structure for the follow-up of large groups of conditions, with expanding teams of specialists. The standardization of risk scores has been helpful for clinicians, rather than needing to keep track of multiple cutoff values, and scales of abnormal results, this information can be communicated quickly and effectively utilizing the CLIR score, and categorization. This model could be utilized in many state NBS labs, as there are common screening kits utilized, allowing for shared development work and tool maintenance if desired. The proof of concept shown here identifies another possible area of implementation for post-analytical tools if the IT requirements to utilize CLIR tools before results are reported cannot be easily implemented locally. 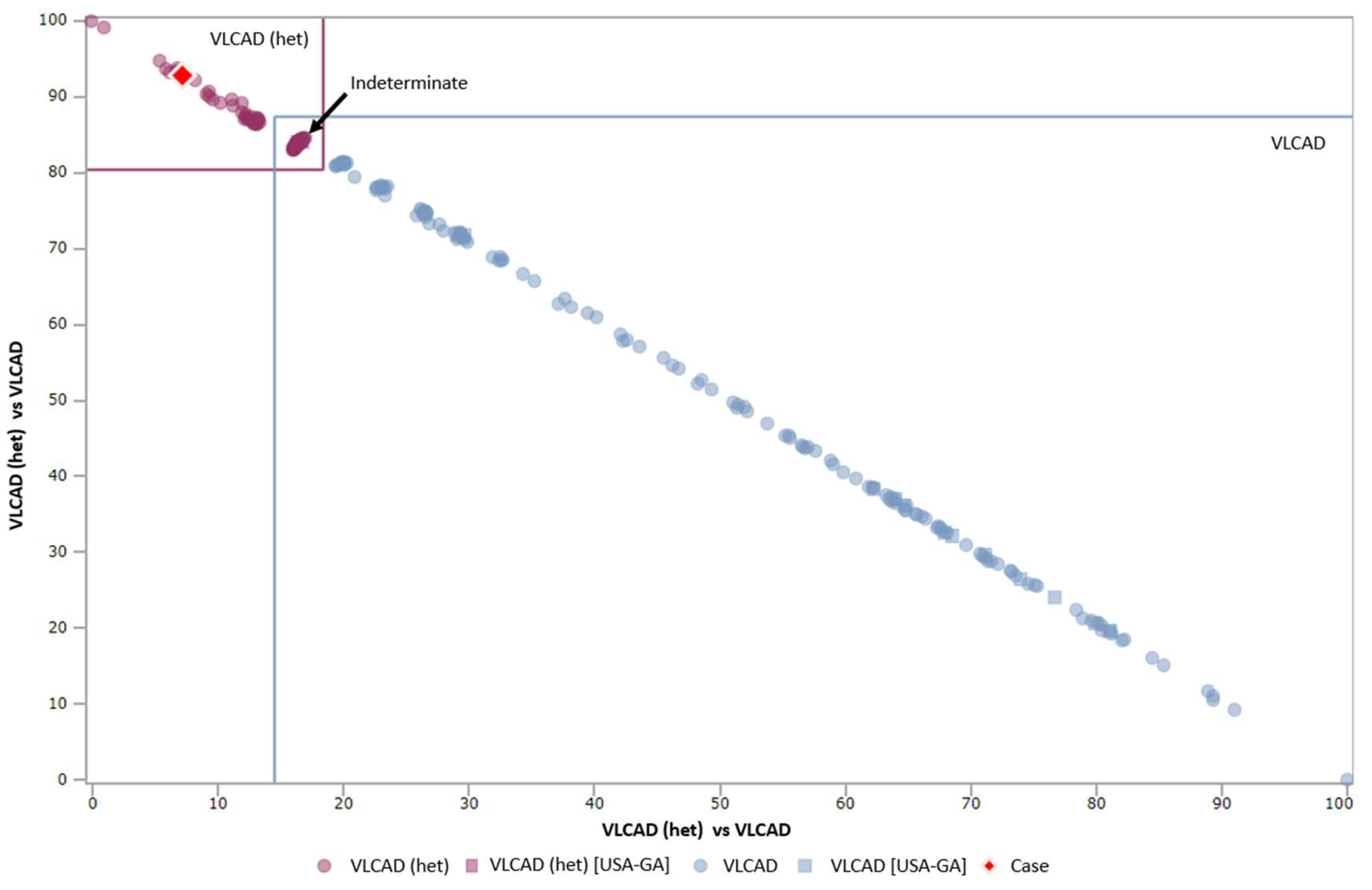