Quantification of Left Atrial Size and Function in Cardiac MR in Correlation to Non-Gated MR and Cardiovascular Risk Factors in Subjects without Cardiovascular Disease: A Population-Based Cohort Study

The left atrium (LA) size and function are linked to cardiovascular morbidity and mortality. An enlarged LA and changes in the LA function have a prognostic value in several cardiovascular diseases such as atrial fibrillation [1,2,3,4], heart failure [5,6,7,8], ischemic heart disease [9,10,11] and cardiomyopathy [12,13,14]. Furthermore, an enlarged LA has been shown to be an independent predictor of stroke and death [15,16]. In addition, the LA is progressively becoming a target for structural and electrophysiological interventional procedures, making it an increasingly important subject of interest [17]. Current studies suggest an association of LA measurements with cardiovascular risk factors and prevalent cardiovascular disease [18]. However, associations with risk factors in the subclinical domain have not been firmly established.
The LA size can be measured using different modalities such as echocardiography, computer tomography (CT), or cardiac magnetic resonance imaging (CMR) [17]. The definition of the LA depends on whether the area or the volume is being assessed. CMR is the most accurate technique for non-invasive LA measurement [19]; however, for volumetric analysis, a short axis stack through the LA or gated CINE images in two planes is needed [20]. In everyday clinical practice, CMR is mainly used to measure ventricular volume and function. Hence, the second plane of the LA, which is necessary to determine LA volume, is lacking [21]. It has not yet been established whether LA area measurements derived from readily available four-chamber CINE images are reproducible.
The determination of the LA function in CMR is based on the calculation of LA volumes during various moments in the heart cycle [22]. It remains unclear whether the LA function, as a readily available substitute, can be determined by area-based LA measurements resulting from a single-slice four-chamber CINE view.
Gated CINE images are not available when the clinical focus of the examination is not laid on the heart. Mahabadi et al. quantified the axial LA area in non-contrast-enhanced, ECG-triggered, axial CT images [23] and showed that those measurements were not only readily reproducible, but cardiovascular risk factors correlate with LA size. It is uncertain whether the information obtained from non-gated, axial magnetic resonance imaging (MRI), as is routinely done, can indicate a LA enlargement and prompt further clinical studies.
The objectives of this study are twofold: First, to determine whether the gated and non-gated LA measurements are comparable, and second, whether LA measurements correlate with cardiovascular risk factors in a sample from a population-based study without overt cardiovascular disease.

A mortality and cardiovascular disease morbidity follow-up of the KORA-MRI study is planned; however, the data are not yet available. The study complies with the Declaration of Helsinki, and all participants provided written informed consent. The KORA studies were approved by the ethics committee of the Bavarian chamber of physicians. The institutional review board approved the MRI examination protocol of the medical faculty of Ludwig-Maximilian University Munich.

A large panel of covariates was assessed at the study center examination in a standardized fashion, including interviews, laboratory analysis, health examinations and medication records as detailed elsewhere [24], enabling a comprehensive analysis of a broad range of clinically relevant cardiovascular risk factors. Body surface area (BSA) was calculated using the Du Bois formula (BSA = 0.007184 * body height0.725 * body weight0.425). The Body Mass Index (BMI) was defined as the body weight in kilograms divided by the squared body height in centimeters. Hypertension was defined as a systolic blood pressure of ≥140 mmHg or a diastolic blood pressure of ≥90 mmHg [27], or the administration of antihypertensive drugs, given that participants were aware of having hypertension.
The participants‘ diabetes status was assessed based on an oral glucose tolerance test using the 1998 WHO criteria [28] or an established diagnosis of type 2 diabetes. Diabetes was newly diagnosed by a fasting serum glucose ≥ 126 mg/dL or 2–hour serum glucose ≥ 200 mg/dL. Prediabetes was defined as either having a normal fasting glucose concentration and a two-hour serum glucose concentration measured by oral glucose tolerance test in the range of 140–200 mg/dL and/or a fasting glucose level between 110–126 mg/dL.
Participants that met neither of the above-stated definition were labeled as normoglycemic. Smoking status was defined as current smokers, ex-smokers and never-smokers. Laboratory analysis for total cholesterol, high-density lipoprotein (HDL), low-density lipoprotein (LDL) and triglycerides were conducted according to standard protocols. Lipid-lowering medications included statins, fibrates or other lipid-modifying agents. Antihypertensive medication was defined as such only if the compounds taken were classified as antihypertensive by the most recent guidelines [24].

The LA measurements were conducted by one blinded reader using the medical imaging platform NORA (www.nora-imaging.com, accessed on 15 April 2022).
For the analysis of the LA area, the CINE images and the T1-weighted VIBE-Dixon sequence were manually segmented by an experienced reader blinded to clinical covariates on dedicated offline workstations.
For the maximum LA area, the LA was segmented in the four-chamber long-axis view in the ventricular end-systole, just before the opening of the mitral valve (LAmax; Figure 1A). For the minimal LA area (LAmin; Figure 1B), the LA was segmented in the ventricular end-diastole just after the closure of the mitral valve [29]. The openings of the pulmonary veins were excluded, and the left atrial appendage was included [30,31].
The non-gated left atrium area (NGLA) was quantified using the T1-weighted VIBE-Dixon sequence of the thorax. In a single slice, the left atrium was manually delineated at the left ventricular outflow tract level and the mitral valve. The pulmonary veins were excluded, and the left atrial appendage was included [23]. An example of segmentation is illustrated in Figure 1C.
As a substitute for the left atrium total ejection fraction (LAtef), which is derived from volume-based LA measurements, we established an area-based measurement, namely the left atrium area fraction (LAaf). The LAaf was calculated with the equation LAaf = (LAmax − LAmin)/LAmax.
For quality assessment, inter-and intra-reader reliability between analysts was conducted on 31 randomly chosen measurements after at least two months.

For the comparison of LA ascertainment methods, correlations between LAmax, LAmin and NGLA measurements were displayed by scatter plots, and Pearson’s correlation coefficients were provided. Box plots were drawn to show the distribution of the LA area measurements.
To assess inter-and intra-reader reliability, the intraclass correlation coefficient (ICC) was calculated with an ICC value close to 1, indicating an excellent agreement between the two measurements. Furthermore, the Bland–Altman plots were visually assessed.
The participants’ descriptive characteristics and cardiovascular risk factors were provided as the mean with standard deviation for continuous variables or percentages and absolute numbers for categorical variables.
To assess the association between LA measurements and cardiovascular risk factors, univariate linear regression models providing β-coefficients with 95% confidence intervals were conducted to analyze unadjusted associations of demographic data and cardiovascular risk factors with LA-parameters (LAmax, LAmin, NGLA and LAaf).
Furthermore, multivariate regression model analyses were performed to explore the adjusted associations of the combined demographic and cardiovascular risk factors with the LA parameters. The variance inflation factor was used to test for multicollinearity. As a result, only the variable hypertension was used as an umbrella term for the actual systolic and diastolic blood pressure measurement and the intake of antihypertensive medication. LDL was excluded due to multicollinearity.
A two-sided p-value < 0.05 was considered to indicate statistical significance. Statistical analyses were carried out using Stata 16.1 (Stata Corporation, College Station, TX, USA).

Among the 400 participants, 378 were included in the final analysis, while 22 participants were excluded due to the following reasons: in six subjects, imaging artifacts were obscuring an adequate segmentation; in three participants, the VIBE-Dixon sequence was missing; in six participants, the CINE sequences were missing; in four participants both sequences were missing; in three participants, the LA could only be incompletely visualized on the CINE-sequences. A flowchart is presented in Appendix A Figure A1).
In the final sample, the subjects were, on average, 56.3 years old; 218 (57.7%) were male. The average BMI was 28.1 kg/m2, while the average body surface measured 1.95 m2. Of the subjects, 131 (34.7%) were classified as having hypertension, and 136 (36%) were smokers. A total of 51 (13.5%) subjects had diabetes, and 99 (26.2%) had prediabetes. Additional characteristics of the study sample are summarized in Table 1.

The informed consent given by KORA study participants does not cover data posting in public databases. However, data are available upon request by means of a project agreement. Requests should be sent to [email protected] and are subject to approval by the KORA Board.

We acknowledge support from the Open Access Publication Fund of the University of Freiburg. 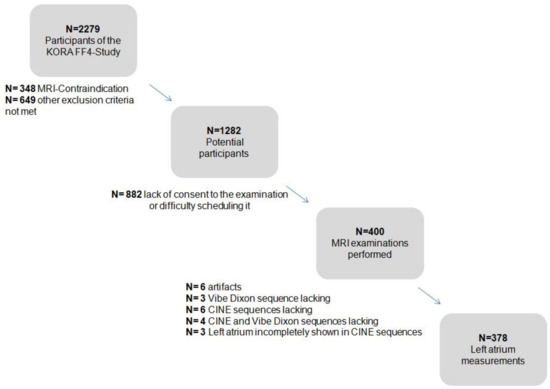 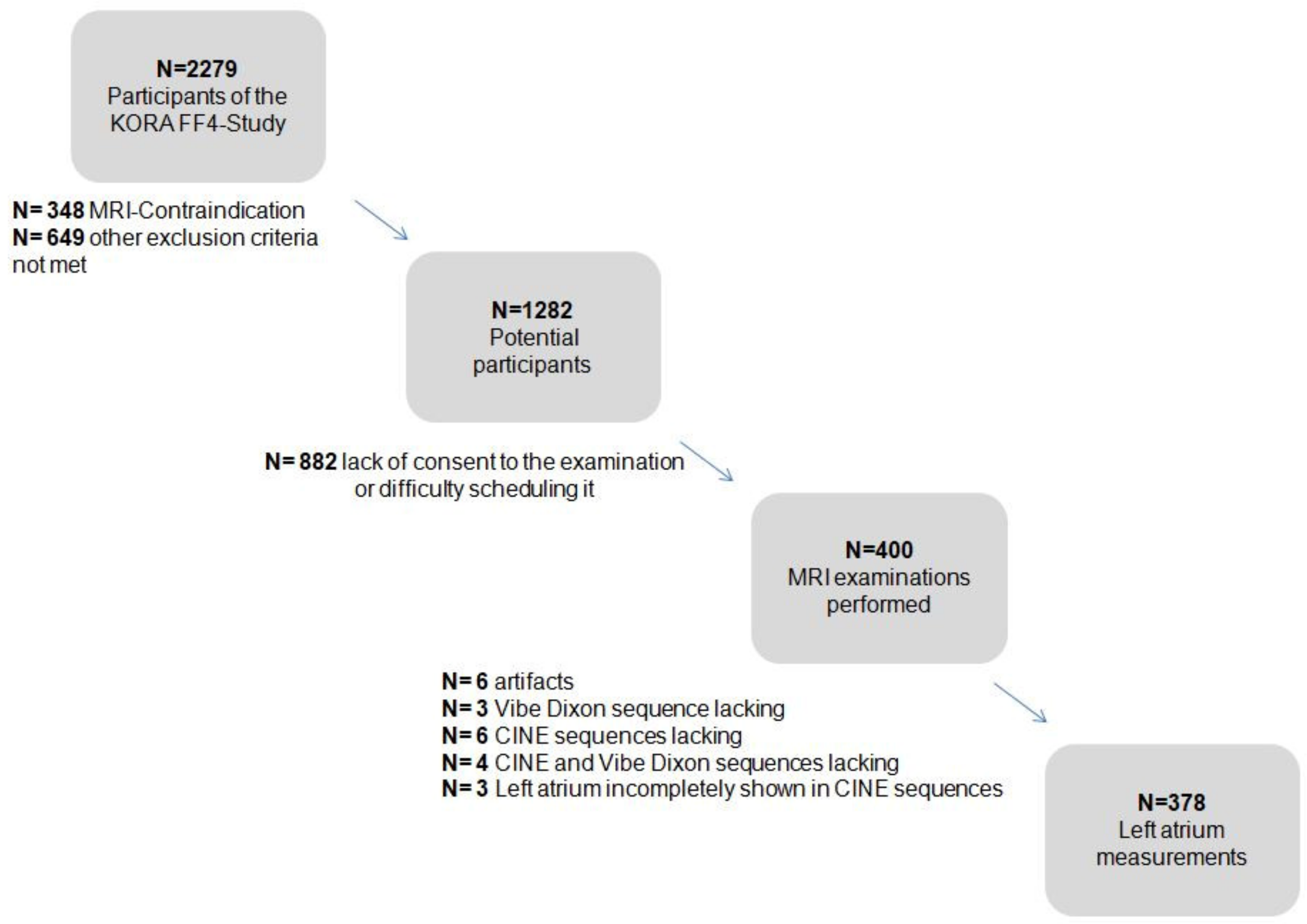 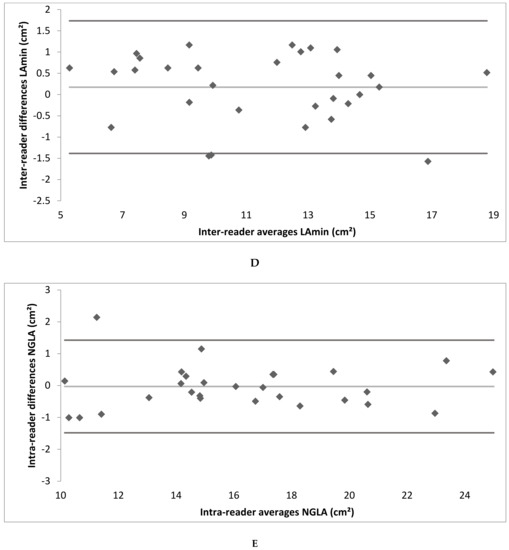 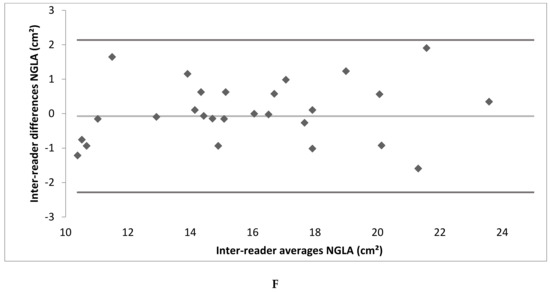 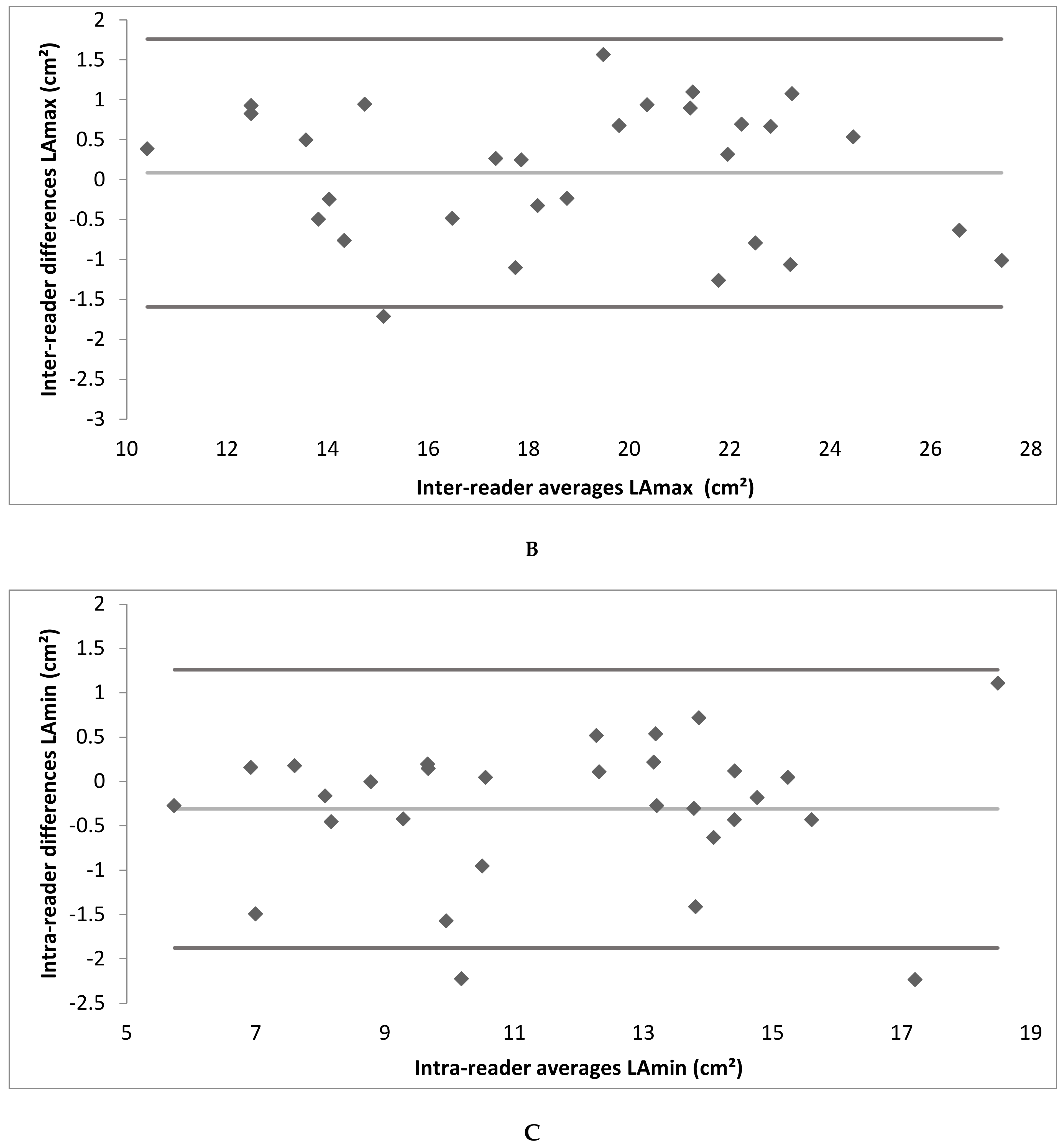 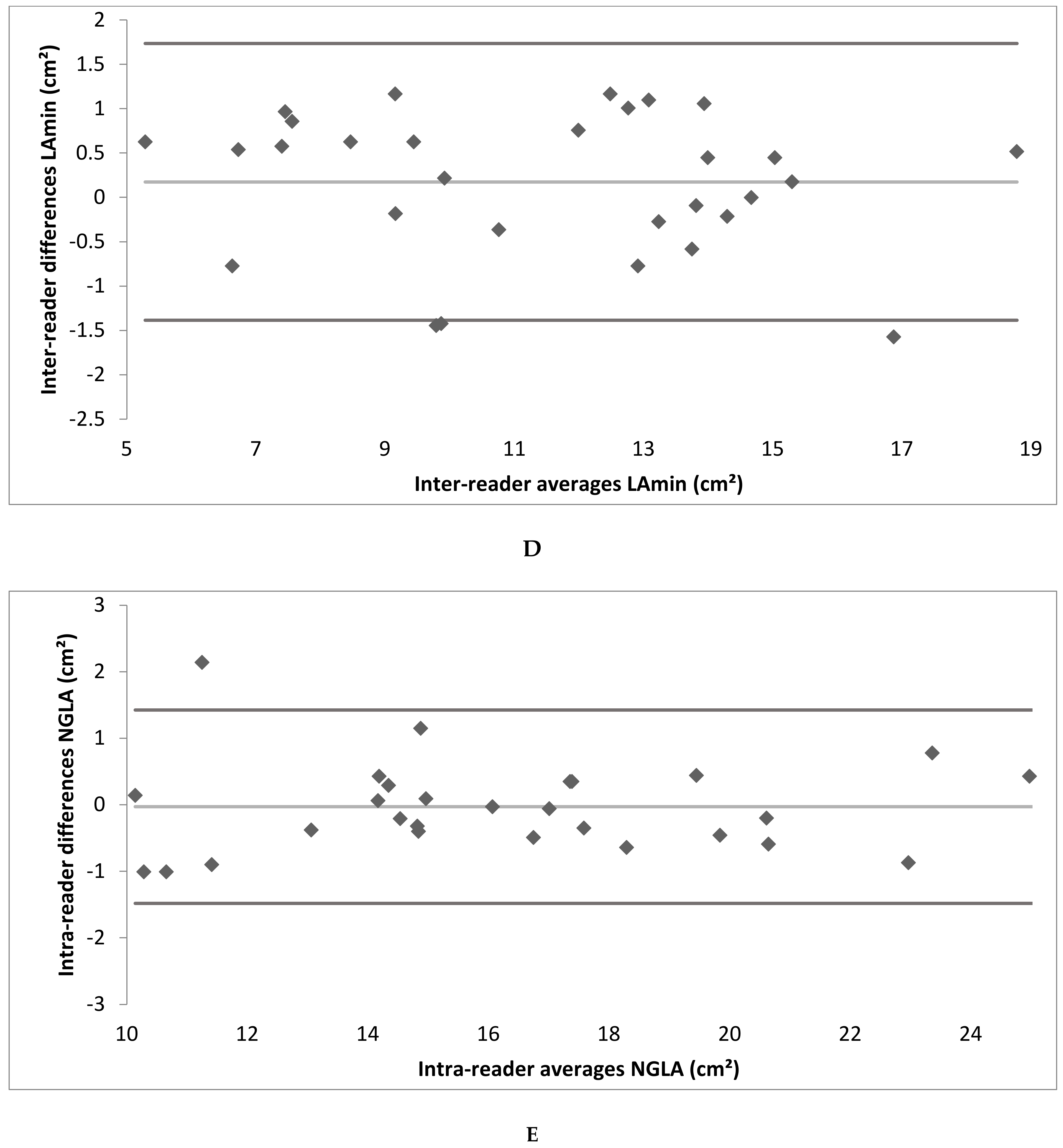 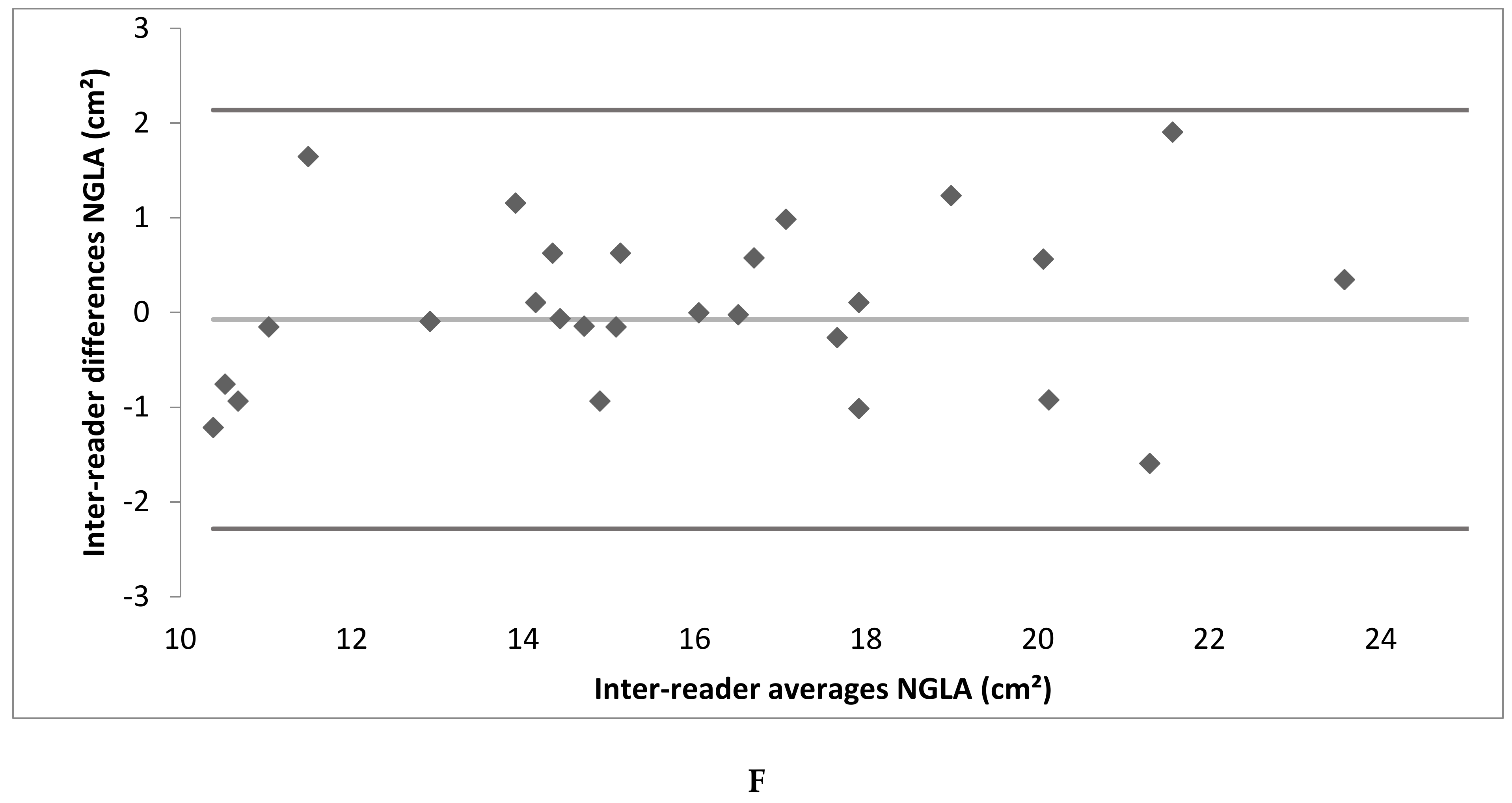