The material bone has attracted the attention of material scientists due to its fracture resistance and ability to self-repair. A mechanoregulated exchange of damaged bone using newly synthesized material avoids the accumulation of fatigue damage. This remodeling process is also the basis for structural adaptation to common loading conditions, thereby reducing the probability of material failure. In the case of fracture, an initial step of tissue formation is followed by a mechanobiological controlled restoration of the pre-fracture state. The present perspective focuses on these mechanobiological aspects of bone remodeling and healing. Specifically, the role of the control function is considered, which describes mechanoregulation as a link between mechanical stimulation and the local response of the material through changes in structure or material properties. Mechanical forces propagate over large distances leading to a complex non-local feedback between mechanical stimulation and material response. To better understand such phenomena, computer models are often employed. As expected from control theory, negative and positive feedback loops lead to entirely different time evolutions, corresponding to stable and unstable states of the material system. After some background information about bone remodeling and healing, we describe a few representative models, the corresponding control functions, and their consequences. The results are then discussed with respect to the potential design of synthetic materials with specific self-repair properties. View Full-Text
Keywords: bone remodeling; bone healing; mechanoregulation; mechanobiology; mechanical stimulus; feedback loop; adaptive material; programmable material; control function bone remodeling; bone healing; mechanoregulation; mechanobiology; mechanical stimulus; feedback loop; adaptive material; programmable material; control function
►▼ Show Figures 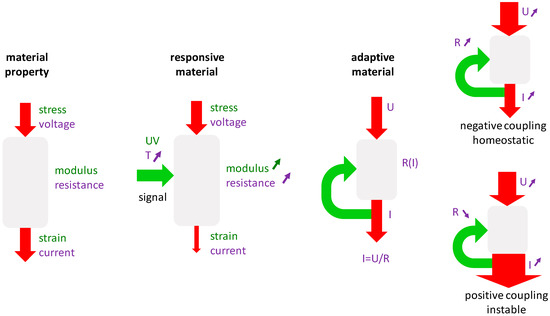 
Weinkamer, Richard; Eberl, Christoph; Fratzl, Peter. 2019. "Mechanoregulation of Bone Remodeling and Healing as Inspiration for Self-Repair in Materials." Biomimetics 4, no. 3: 46.