In War Time: Dialectics of Descent, Consent, and Conflict in American Nationalism
Next Article in Special Issue

The Shields that Guard the Realms of Men: Heraldry in Game of Thrones
Previous Article in Journal

The Remains of Arnau de Torroja, 9th Grand Master of the Knights Templar, Discovered in Verona

One might perceive the Middle Ages as an era of certain rights and privileges. Social stratification or the conformation of a group’s identity were all established around privileges in the Kingdom of Hungary. In the medieval period, as opposed to a modern state, the most important constructors of a group’s identity were privileges. When members of a social group bear identical prerogatives, that group can be recognized as an order or estate. The ecclesiastic order existed side-by-side with the noble estate. In possession of political power were strictly those who were at the top of the strongly hierarchical system. However, in the Kingdom of Hungary, the significance of the ecclesiastical order was dwarfed by the importance of landed nobility. Some five percent of the population was of nobles, who also held political power. Until the end of the 15th century, the members of this stratum were equal in law. Only distinctions in financial situation can be noticed during the 14th and 15th centuries. The first law differentiating the rights within nobility was enacted by the national assembly, the diet of Wladislaus II (1490–1516), in 1498. Only from then on can we speak of gentry and aristocracy. This almost two-century-long process can be observed by examining a representational tool, the usage of red wax in seals. Upon studying medieval Hungarian history, we must use all sources available due to their rapid destruction, hence examining seal usage to explain aristocratic representation. In this paper, we briefly summarize the social structure of medieval Hungary and its traditions in seal usage, and present several unique seals. Our goal is to highlight some connections that historiography would benefit from, to provide new data, and to arouse the interest of a broad spectrum of audiences in Hungarian social history. View Full-Text
Keywords: Kingdom of Hungary; social structure; nobility; red wax; aristocracy Kingdom of Hungary; social structure; nobility; red wax; aristocracy
►▼ Show Figures 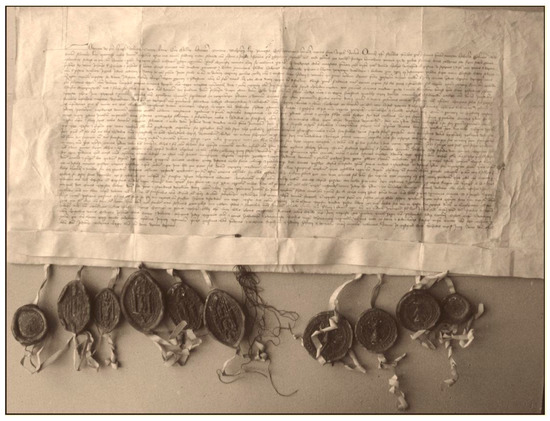