Speeds of Young E-Cyclists on Urban Streets and Related Risk Factors: An Observational Study in Israel

In Israel, a growing use of electric bicycles by youngsters has been noted, with an increase in related injuries. In this study, an observational survey was conducted on typical urban streets, aiming to characterize the riding speeds of young e-cyclists compared to regular cyclists and the associated risk factors in their behaviors. The survey covered 39 sites in eight cities, and included 1054 cyclists. The results showed that mean speeds of young e-cyclists were higher than those of regular cyclists at all types of sites, with a difference of 6–9 km/h. The mean speeds of e-bicycles were below 25 km/h, as prescribed by law, but the 85-percentile speeds were higher. E-cyclist speeds depend on the type of street, road layout and place of riding. More e-cyclists used the roadway compared to regular cyclists, however, on divided roads, more e-cyclists used sidewalks in spite of the law prohibition, thus endangering pedestrians. The majority of cyclists did not wear helmets. The unsafe behaviors of teenage e-cyclists increase the injury risk for themselves and for other road-users. Thus, separate bicycle infrastructure should be promoted in the cities. Road safety education and training of young e-cyclists with stronger enforcement of traffic regulations are also needed. View Full-Text
Keywords: e-bicycles; youngsters; speeds; behaviors; observation e-bicycles; youngsters; speeds; behaviors; observation
►▼ Show Figures 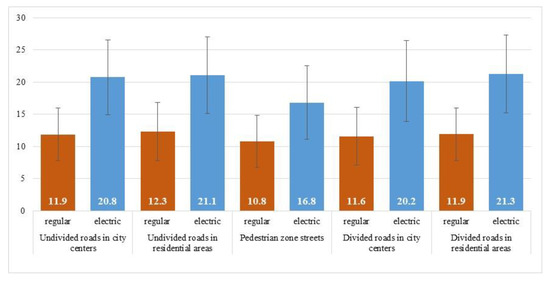