Computer Assisted Examination of Infrared and Near Infrared Spectra to Assess Structural and Molecular Changes in Biological Samples Exposed to Pollutants: A Case of Study
Previous Article in Journal

Autonomous selective spraying could be a way for agriculture to reduce production costs, save resources, protect the environment and help to fulfill specific pesticide regulations. The objective of this paper was to investigate the use of a low-cost sonar sensor for autonomous selective spraying of single plants. For this, a belt driven autonomous robot was used with an attached 3-axes frame with three degrees of freedom. In the tool center point (TCP) of the 3-axes frame, a sonar sensor and a spray valve were attached to create a point cloud representation of the surface, detect plants in the area and perform selective spraying. The autonomous robot was tested on replicates of artificial crop plants. The location of each plant was identified out of the acquired point cloud with the help of Euclidian clustering. The gained plant positions were spatially transformed from the coordinates of the sonar sensor to the valve location to determine the exact irrigation points. The results showed that the robot was able to automatically detect the position of each plant with an accuracy of 2.7 cm and could spray on these selected points. This selective spraying reduced the used liquid by 72%, when comparing it to a conventional spraying method in the same conditions. View Full-Text
Keywords: selective spraying; single plant; agricultural robot; sonar; ultrasonic; point cloud; 3D imaging selective spraying; single plant; agricultural robot; sonar; ultrasonic; point cloud; 3D imaging
►▼ Show Figures 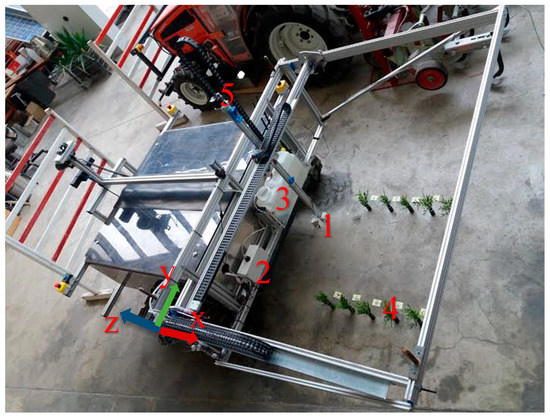