Compression ignition (CI) engines have been used in the industrial and agricultural sectors, and in construction, power factories, and transportation, for several decades. This broad use has resulted in a growing demand for petroleum-based diesel [1,2,3,4,5]. However, global fossil-fuel reserves have become limited due to rising fuel prices, depleting petroleum reserves and issues related to atmospheric pollution [4,5,6,7,8,9]. As a result, many researchers have concentrated on the discovery of renewable, carbon-neutral, and environmentally-friendly non-petroleum-based diesel in recent years [10,11,12,13]. Biodiesel is produced from various feedstocks, such as rapeseed, soybean, cottonseed oil, palm oil, and jojoba oil, and can be used to fuel internal combustion engines with no significant differences from petroleum-based fuels [14,15,16,17]. Since most biodiesel is manufactured using edible oils, the price of biodiesel is higher than conventional diesel. This is a significant barrier to the commercialization of biodiesel [8]. The use of edible feedstocks could also intensify the competition between fuel supply and food production on agricultural land, increasing the cost of food and oil [14,18,19,20]. As such, low-priced, inedible feedstock-based fuels, such as waste cooking oil synthetic diesel (WCOSD), should be adopted due to their competitive pricing compared to conventional diesel, and to ensure food security worldwide. The use of feedstock-based fuels can also help to lessen environmental issues by reducing waste-oil disposal.
Ahmet Necati Ozsezen et al. performed the experiment on canola oil methyl esters (COME) and waste palm oil esters (WPOME) [21], and they observed that while maximum engine torque slightly decreased, brake specific fuel consumption (BSFC) increased when compared to commercial diesel (CD) fuel. In terms of combustion characteristics, although the peak cylinder gas pressures for COME and WPOME were respectively 8.33 MPa and 8.34 MPa, at a 6.75° crankshaft angle (CA) after top dead center (ATDC), the peak cylinder gas pressure for CD fuel was 7.89 MPa at a 7° CA ATDC. In another study, K. Muralidharan explored the effects of compression ratio on the combustion characteristics of a variable compression ratio engine fueled by diesel and methyl esters of waste cooking oil (WCO) blends [15]. As a consequence, the compression ratios were changed, corresponding to the values of 18:1, 19:1, 20:1, 21:1 and 22:1. At the compression ratio of 21:1, although the BSFC of the B40 blend (a blend of 40% biodiesel) was 0.259 kg/kWh, the BSFC of the CD was 0.314 kg/kWh. Muralidharan’s results also revealed that the engine fueled with WCOSD methyl ester had a lower heat release rate, a lower maximum rate of pressure rise, a longer ignition delay and a higher mass fraction, that was burnt at a higher compression ratio, than the engine that was fueled with diesel. In summary, fuel blends can increase nitrogen oxide emissions and decrease the emissions of hydrocarbon and carbon monoxide. When A. Abu-Jrai et al. [20] tested blends of treated WCOSD and CD on a naturally aspirated diesel engine, to investigate the engine’s exhaust emission and combustion characteristics, they observed that the total combustion duration of B50 was longer than the total combustion duration of CD fuel. They also noted that the combustion was advanced at all engine loads and that the BSFC for B50 was slightly higher than the BSFC for conventional diesel. In addition, while the concentration of NOx emissions in the engine fueled by B50 increased by 37%, 29% and 22%, smoke emissions dropped by 42%, 31% and 30%, when compared to the emission reductions of the full load at 25%, 50% and 75%, respectively, for the engine fueled by conventional diesel.
In H. An et al.’s [22] investigation into the impacts of biodiesel that had been derived from WCO on emission characteristics, combustion characteristics and the performance of a test engine, they concluded that the use of biodiesel/blended fuels led to a higher BSFC, particularly at partial load conditions and low engine speeds. The thermal brake efficiency (BTE) of the engine fueled with biodiesel was also found to be slightly lower than the BTE of the engine fueled with conventional diesel at a 25% load. By comparison, the engine’s BTE was higher, with conventional diesel loads of 50% and 100%. In addition, major emissions, such as HC and NOx, were slightly lower for biodiesel than they were for CD. During the combustion process, the ignition delay was slightly shorter, and the peak heat release rate was lower for the engine fueled by biodiesel. However, at low engine speeds, these factors adopted an opposite trend, significantly impacting the engine’s emissions and combustion processes.
In addition to the research projects that have been discussed above, several other studies have investigated the use of trans-esterification biodiesel fuel, produced from WCOSD, in CI engines. Regardless, no study has investigated the impacts of synthetic biodiesel on the cooling and lubricant temperature of the conventional CI engines. As such, this research aims to discuss the technology that is used to produce biodiesel derived from WCO, and evaluate its characteristics and usability in conventional CI engines. To achieve these aims, experiments were conducted to produce WCOSD. In addition, experimental procedures were performed to measure the characteristics of test engines fueled by either diesel or WCOSD. The results of this research are the foundation for using catalyst cracking biodiesel that is derived from WCO in diesel vehicles worldwide.

The engine that this study used was a single-cylinder, four strokes, naturally aspirated and water-cooled DI CI engine. The engine’s specifications are summarized in Table 1.
The test engine was coupled with a DC regenerative dynamometer—40KW (LKA 4180-AA). The specifications of the dynamometer are presented in Table 3.

The experimental process in this study proceeded in two main phases as showed in Figure 10. The purpose of the first phase is to investigate the effects of catalyst cracking biodiesel from waste cooking oil on the performance of the tested engine. To reach this purpose, the effects of WCOSD on the emission characteristics and performance of the test engine are compared to those of commercial diesel. The effects of injection timing on the operation of the engine fueled with WCOSD are investigated in the second phase. To change injection timing, the camshaft of the engine is changed. The camshafts include the three following modes: (1) Standard camshaft (STD), with this camshaft both diesel and WCOSD are tested; (2) Modified camshaft with fuel cam advanced 2° CA (STD −2); and (3) Modified camshaft with fuel cam retarded 2° CA (STD +2).
Consequently, the engine is tested with commercial diesel fuel as a reference fuel. Second, the engine is tested with WCOSD. The engine firstly needs to warm-up to the steady operating conditions. At each test point, after adjusting to achieve desired speed and torque (or power), we wait until the engine reaches a stable operating state, then measure all desired parameters. These parameters include engine speed, power output (or torque), fuel consumption, intake air flow rate, exhaust and intake gas temperatures, oil temperatures, cooling water temperature, fuel temperature, environmental conditions and exhaust emission. However, this research is focused on the effect of fuels on the engine characteristics of performance, lubricant and cooling temperature; thus, we only show the results relating to these issues at the standard camshaft value. 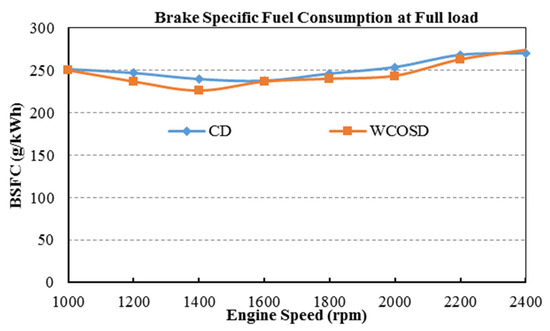 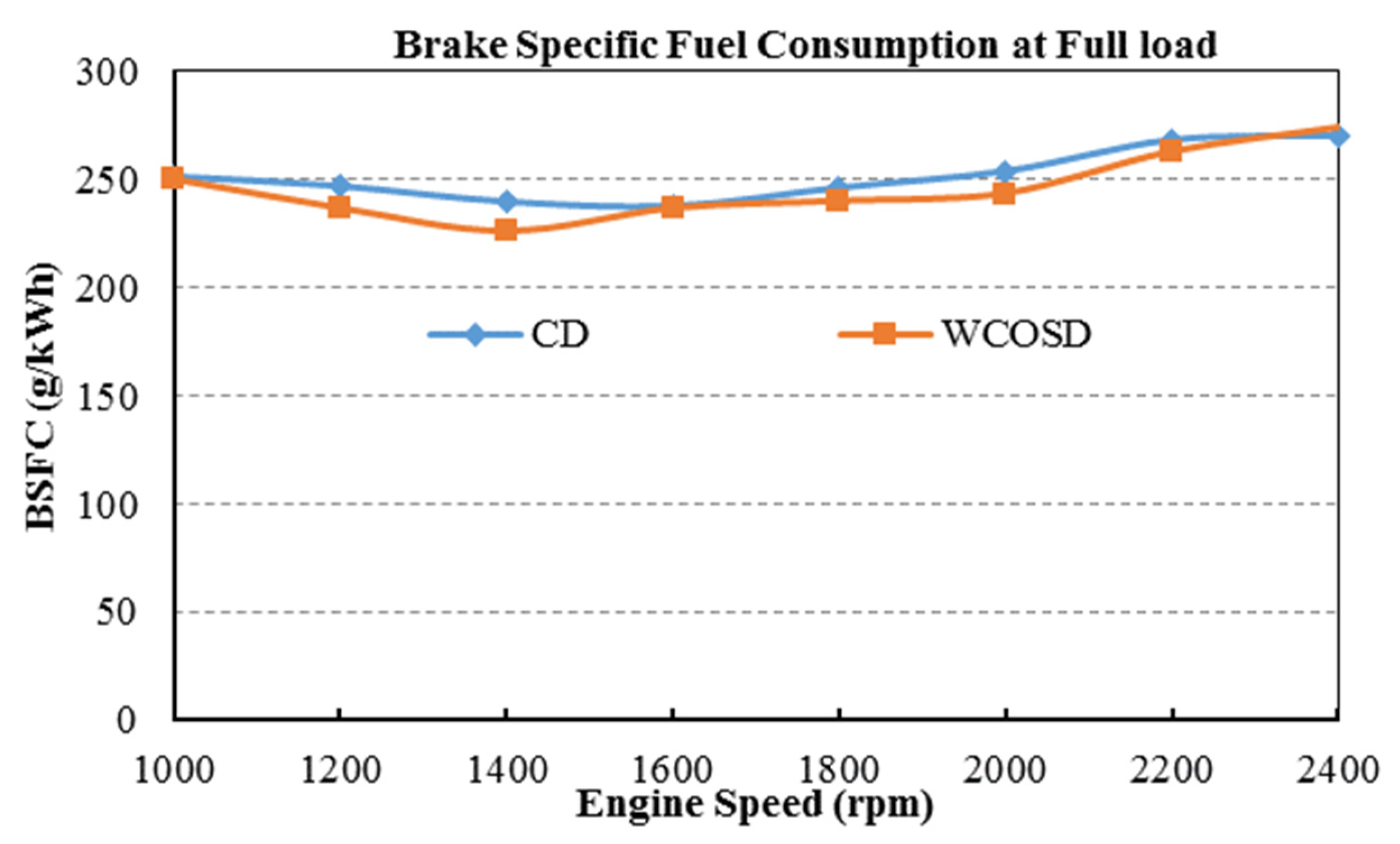 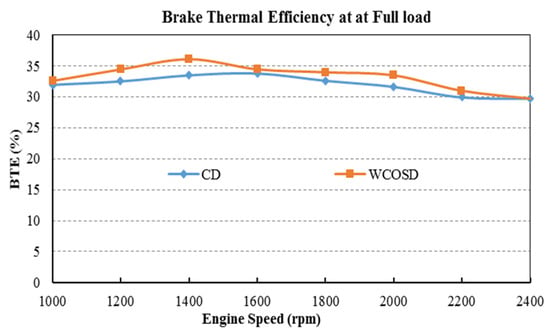 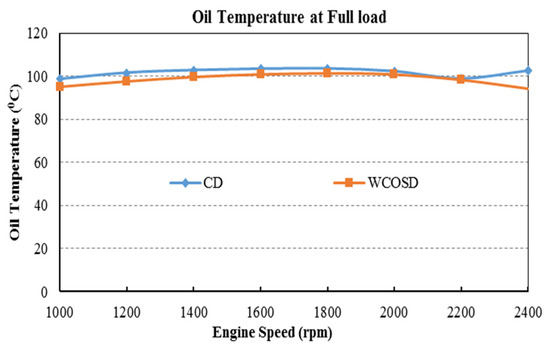 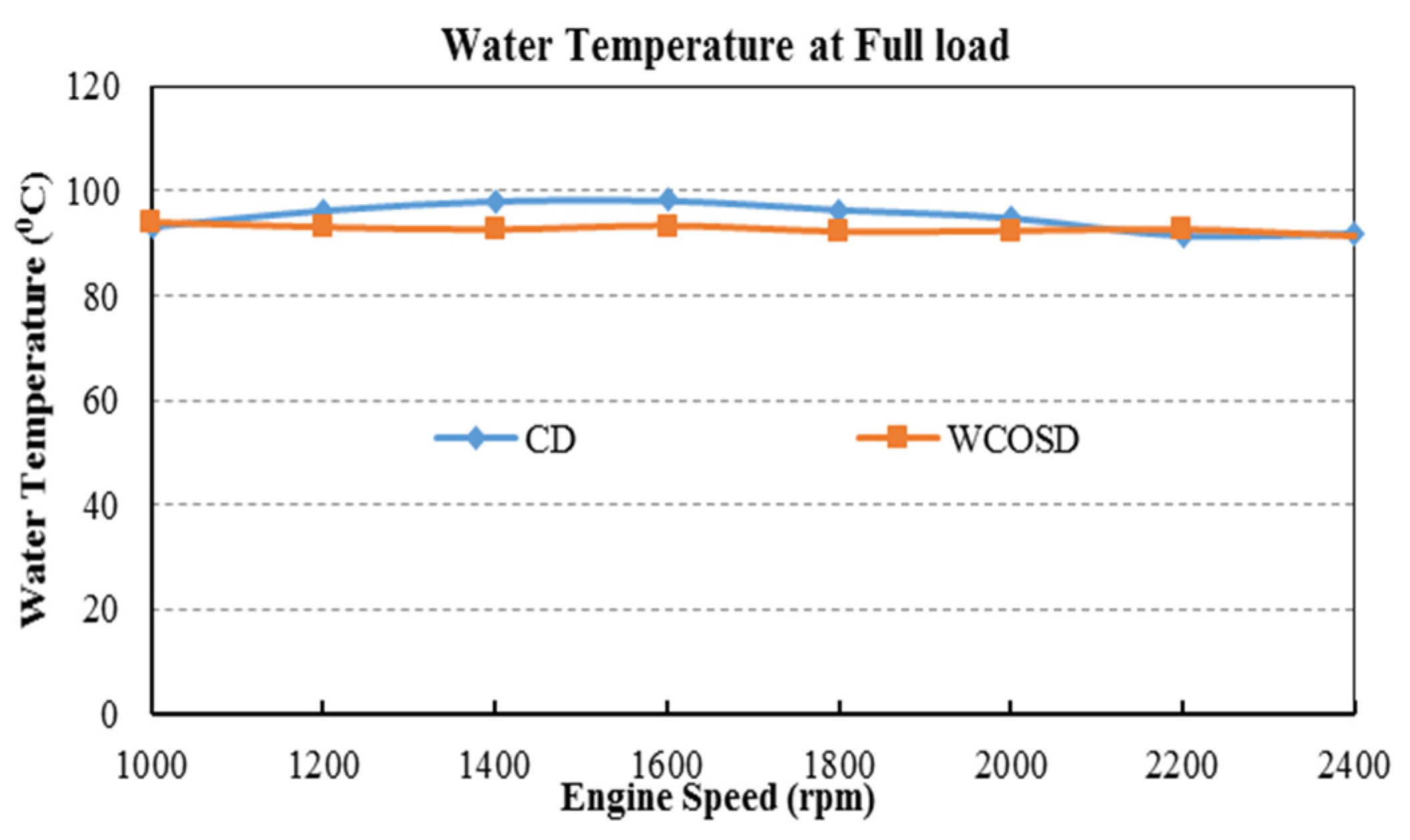 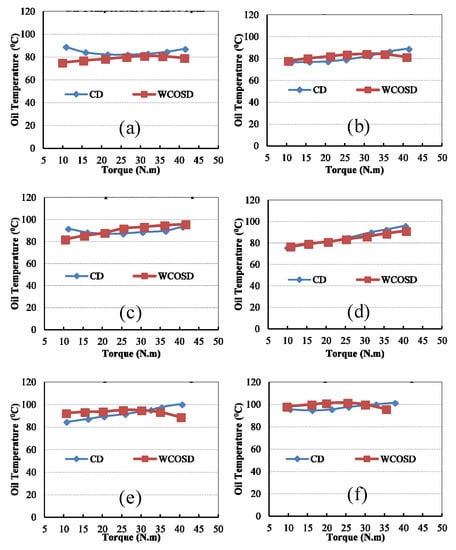 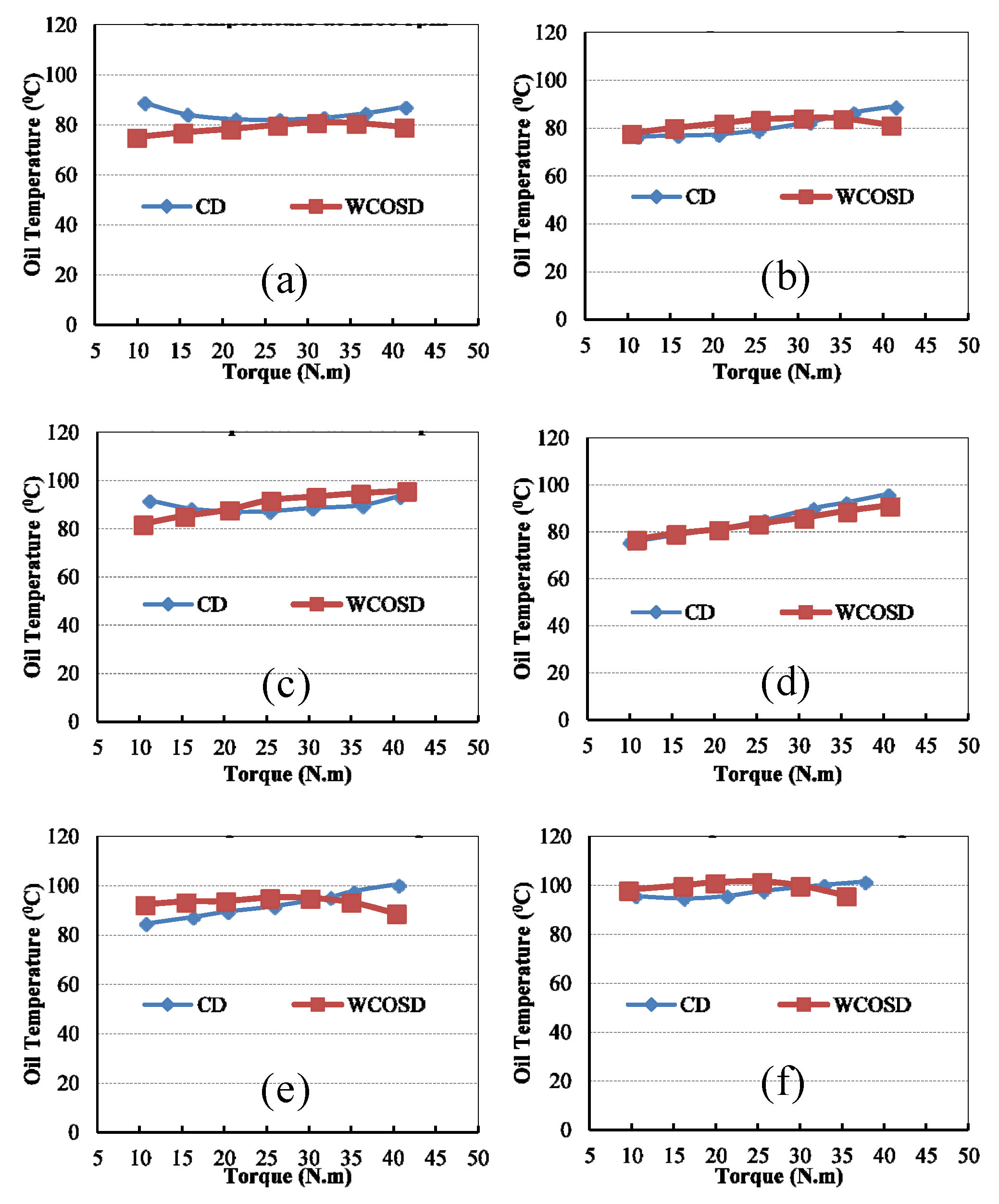 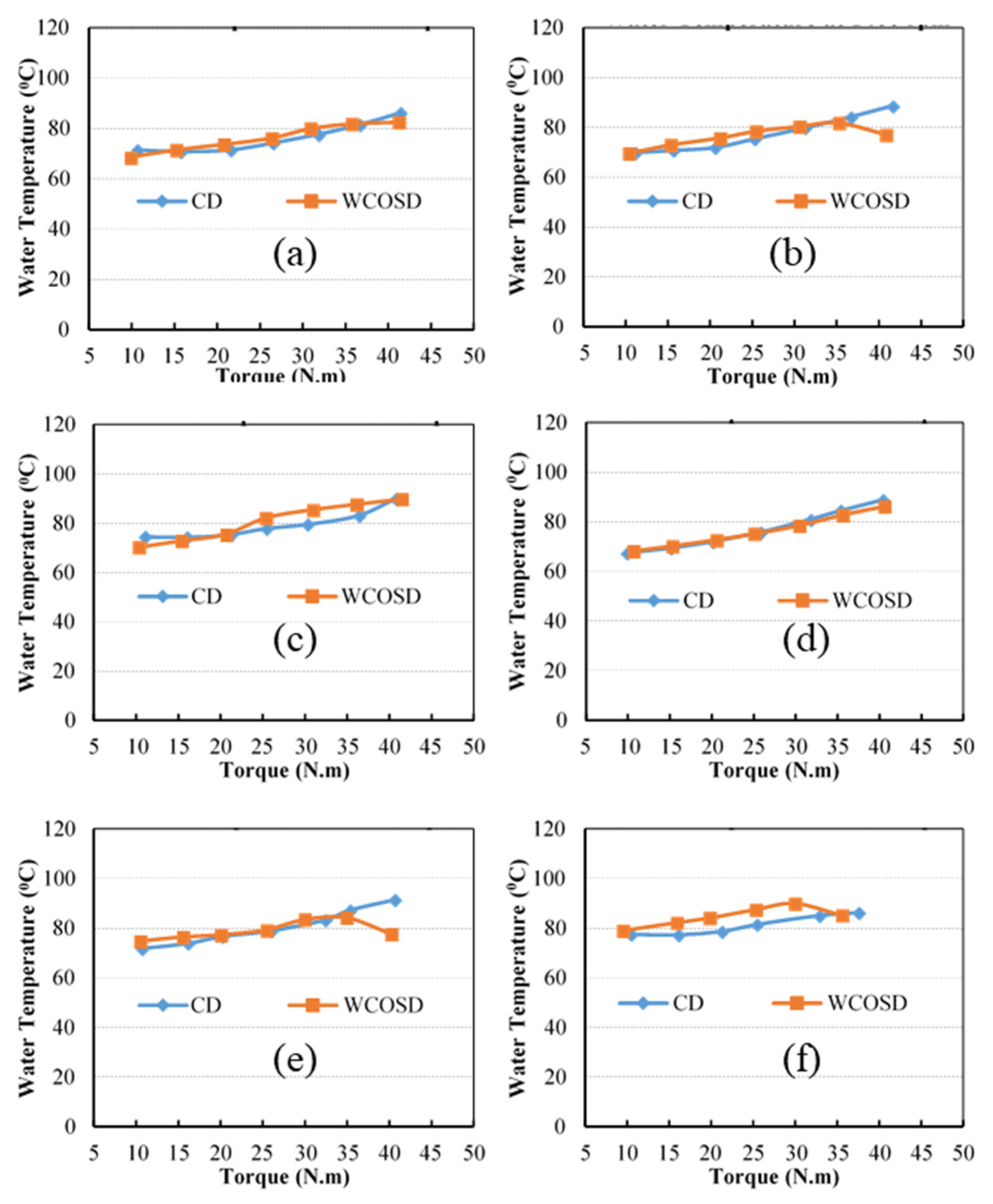 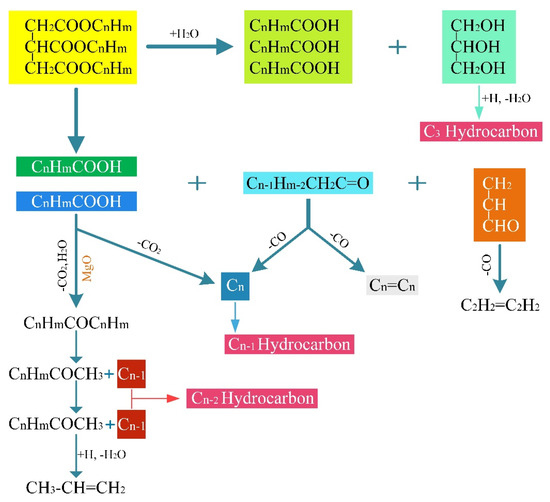 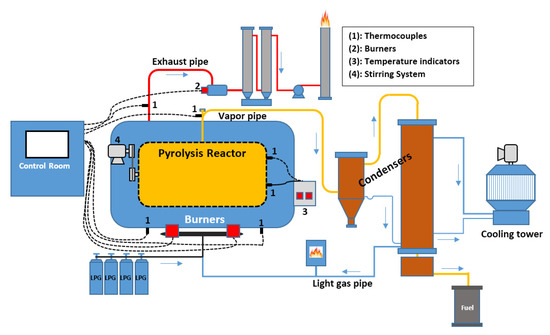 Table 3. Specifications of the 40-kW direct current generator.
Table 3. Specifications of the 40-kW direct current generator.
© 2020 by the authors. Licensee MDPI, Basel, Switzerland. This article is an open access article distributed under the terms and conditions of the Creative Commons Attribution (CC BY) license (http://creativecommons.org/licenses/by/4.0/).
We use cookies on our website to ensure you get the best experience. Read more about our cookies here.
Accept
We have just recently launched a new version of our website. Help us to further improve by taking part in this short 5 minute survey here. here.
Never show this again