Polyoxometalates (POMs) are discrete molecular metal oxides, typically composed of early transition metals (M) (such as W6+, Mo6+, V5+, Nb5+ and Ta5+) in their high oxidation states. POMs have been attracting increasing interest in recent years owing to their enormous structural and compositional diversity and wide variety of applications [1,2,3]. The inherent properties of parent POMs can basically be modified by tuning the primary structural properties at the atomic or molecular level [4]. Lacunary (or vacant) POMs, which can be derived from parent polyanions of the Keggin [XW12O40]n− or Wells–Dawson [X2W18O61]n− structures (X = Si, Ge, P, As, etc.) by removal of one or more WVI centers under controlled basic conditions, are considered as multidentate all-inorganic ligands. POM ligands show a strong affinity to transition metal (TM) and lanthanide (Ln) cations, allowing the design and development of new POM-based materials with enhanced electronic properties [5,6,7,8,9,10,11,12,13,14,15,16,17]. A POM ligand with typical intrinsic properties, such as oxygen-rich surface, strong coordinating ability, various mode of coordination, adjustable/flexible size, thermal stability and hydrolytic stability, is expected to afford more rigid materials with a multitude of shapes, sizes and compositions in comparison with commonly utilized organic ligands [18]. More particularly, the bridging geometries imposed by POM-based ligands on di- or polynuclear metal complexes may differ significantly from those typically observed with the more usual organic-based bridging ligands, leading to different magnetic coupling scenarios. In addition, POMs may be promising inorganic diamagnetic ligands for constructing paramagnetic metal complexes, since the bulky feature of POM ligands assures an effective insulation of magnetic cores within the POM backbone, thus suppressing intermolecular magnetic interaction and polymerization [19,20,21]. Among magnetically functionalized POMs, the chemistry of iron-POMs is of great interest particularly for their inherent magnetic properties; they often exhibit interesting magnetic properties due to the high-spin FeII/III centers [22,23]. Another important aspect of iron-POMs is their catalytic applications due to the easily available FeII/III redox couple [24,25,26,27].
As part of our ongoing research on Fe(III)-POM chemistry, we report here the dinuclear FeIII-containing 12-tungsto-4-arsenite(III) [FeIII2(AsIIIW6O23)2(AsIIIO3H)2]12− (1), which has been synthesized under normal bench conditions by the reaction of Na2WO4·2H2O, As2O3 and FeCl3·6H2O in basic medium, and characterized by single crystal X-ray crystallography (SCXD), powder X-ray diffraction (PXRD), Fourier-transform infrared (FT-IR) spectroscopy, elemental analysis and thermogravimetric analysis. The magnetic properties of 1 have been investigated.

All reactions were carried out under aerobic conditions. All reagents were purchased commercially and were used without further purification.

The novel POM [FeIII2(AsIIIW6O23)2(AsIIIO3H)2]12− (1) was isolated as its sodium salt by reaction of Fe(III) ion with Na2WO4·2H2O and As2O3 in the presence of (Me2NH2)Cl in basic medium (pH 8) at 80 °C. Although dimethylammonium cations are not found in the crystal structure, their presence appears to play an important role in obtaining diffraction-quality crystals. The absence of the dimethylammonium cation was confirmed by elemental analyses, and no absorption bands for dimethylammonium cations were observed in the FT-IR spectrum of Na-I. In addition to delivering high-quality crystals, an organic cation was also a factor in obtaining a phase pure product. Whereas, the reactions which were carried out under the same conditions in absence of (Me2NH2)Cl produced a mixture of a yellow and white product. The investigation of this impure product by FT-IR spectroscopy indicates the presences of Na-1 and unidentified material (Figure S1).

The compound crystallizes as the hydrated sodium salt Na12[FeIII2(AsIIIW6O23)2(AsIIIO3H)2].30H2O {Na-1} in the triclinic space group P with Z = 1; the cluster thus has crystallographically-imposed inversion symmetry. Crystal data for Na-1 are summarized in Table 1. The X-ray structure of the anionic component [FeIII2(AsW6O23)2(AsIIIO3H)2]12− (1) reveals that the two FeIII ions are sandwiched between two equivalent hexatungstate {As2W6} units (Figure 1). In {As2W6} moiety an arsenate group decorates the {AsW6} units through two µ2-oxo bridges (via two As-O=W bridges). The highly vacant lacunary specie {As2W6} contains two edge-sharing tungstate triads {W3O13} connected via their corner-sharing oxygen atoms (Figure 2 left). This type of building block and assembly are a common feature of most polytungstate clusters, but to the best of our knowledge a POM cluster based on two triads has been isolated for the first time in the present work. The hexalacunary unit {AsW6} in 1 is different from the previously reported {PW6} unit in structure [P8W12Co2Na2O68]18− that contains three edge-sharing tungstate {W2O10} units which connect to each other via their corner-sharing oxygen atoms, and a phosphate group then decorates each of these {W2O10} units [28]. The hexalacunary {AsW6} units are structurally related to the well-known trilacunary heteropolyanion [B-AsW9O33]9− but with one missing triad {W3O13}. The two FeIII ions are bridged by two oxygen atoms from arsenite groups, O(1) and its inversion equivalent O(1′). The rigid {As2W6} moieties impose a bridging geometry with a rather small Fe-O-Fe angle: Fe(1)-O(1) = 2.035(6) Å, Fe(1′)-O(1) = 2.047(7) Å, Fe(1)-O(1)-Fe(1′) = 99.1(3)°. Fe(1) is six coordinate, adopting a distorted octahedral geometry (Figure 2 right), and this coordination sphere is completed by four oxido ligands from two {As2W6} units. Two protons are required for charge-balance, and these were located in the crystal structure, bonded to oxygens O(6) and O(6′) of the outer arsenite moieties, where they are involved in hydrogen bonds to oxido ligands of neighboring cluster molecules (Figure 3). After submission of this work, it became apparent that the same compound is reported in the PhD thesis of Wenjing Liu, 2015, Jacobs University (Bremen, Germany), PhD mentor: Prof. U. Kortz. Also some other dinuclear tungstoarsenate(III) complexes [H2M2(AsIIIW6O23)2(AsIIIO3)2]n− (M = ScIII, InIII, and TiIV) and [H3CrIII2(AsIIIW6O23)2(AsIIIO3)2]11− have been reported there [29]. The polyanionic unit of these complexes also consist of two equivalent {As2W6} units, which then sandwich two metal ions bridged by four M−O−W and two M−O−As bridges. These central embedded metal ions also adopt a distorted octahedral geometry similar to FeIII metal ion geometry in 1.

The experimental powder XRD pattern (measured at room temperature) is compatible with the pattern simulated from the solved crystal structure are shown in Figure 4. The diffraction peaks of both calculated and experimental patterns match well, which indicates the phase purity of the bulk product.

The FT-IR spectrum of Na-1 displays a fingerprint region that is characteristic of tungstoarsenates [30]. The observed bands at 933 cm−1 and 848 cm−1 are assigned to νas (W=Ot), and νas(W–Ob–W) vibrations, respectively. The bands belonging to W–Oc–W vibrations appeared at 717 and 609 cm−1. The absorption bands of the As–O (900 cm−1) vibrations are partially overlapped with the νas(W–Ob–W) ones. The strong peak at about 1630 cm−1 corresponds to vibrations of lattice water molecules. No vibrational modes of dimethylammonium cations were observed (Figure S1).

The thermal decomposition processes for Na-1 was investigated under an N2 atmosphere from room temperature (RT) to 1000 °C (Figure S2). The TGA curve indicates two weight loss steps. The first step corresponds to the dehydration process, which starts at RT and is completed at around ~340 °C. This weight loss involves the loss of 25 water molecules [% calc. (found): 12.6 (11)]. The second weight loss occurs between 340 °C and 587 °C which can be associated to the removal of two arsenic groups {AsO} per formula unit [% calc. (found): 4.8 (4.0)]. The slight difference between the calculated and observed values for water content observed in TGA of Na-1 can be justified by a higher degree of dryness of the sample used for TGA analysis. The final residue Na12As2Fe2W12O50 (~83% (calc.) remained stable between 587 °C and 1000 °C and accounts for 85 % (found) of the total mass.

We have prepared and structurally characterized the first FeIII-containing hexalacunary heteroarsenotungstate 1 by using simple open-beaker, aqueous solution synthesis technique. The new heteropolyanion architecture involves the sandwiching of the two paramagnetic iron centers between two rigid {As2W6} metalloligands, and the geometry imposed by these on the FeIII2 core resulted in an unusually weak antiferromagnetic interaction. Future work will be concentrated on exploring the hexalacunary systems with variety of paramagnetic and diamagnetic cations with related magnetic and catalytic investigations.

All the authors contributed to this work. M.I. conceived and designed the experiments. M.I. characterized the compound. Structure refinement was done by C.E.A. Magnetic data were processed by Y.P. The manuscript was written with participation of all authors, who have all checked and approved the manuscript. All authors have read and agreed to the published version of the manuscript. 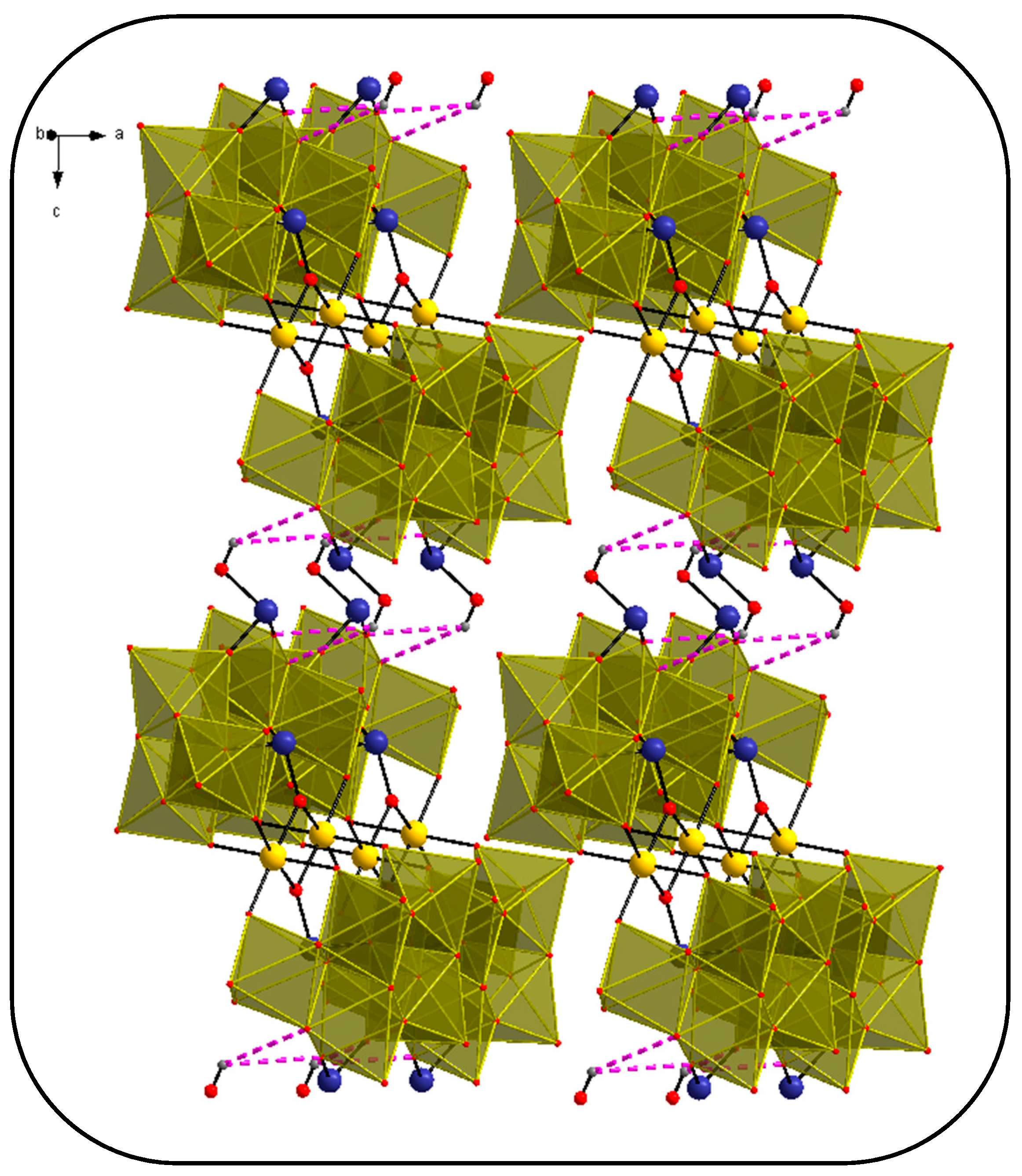 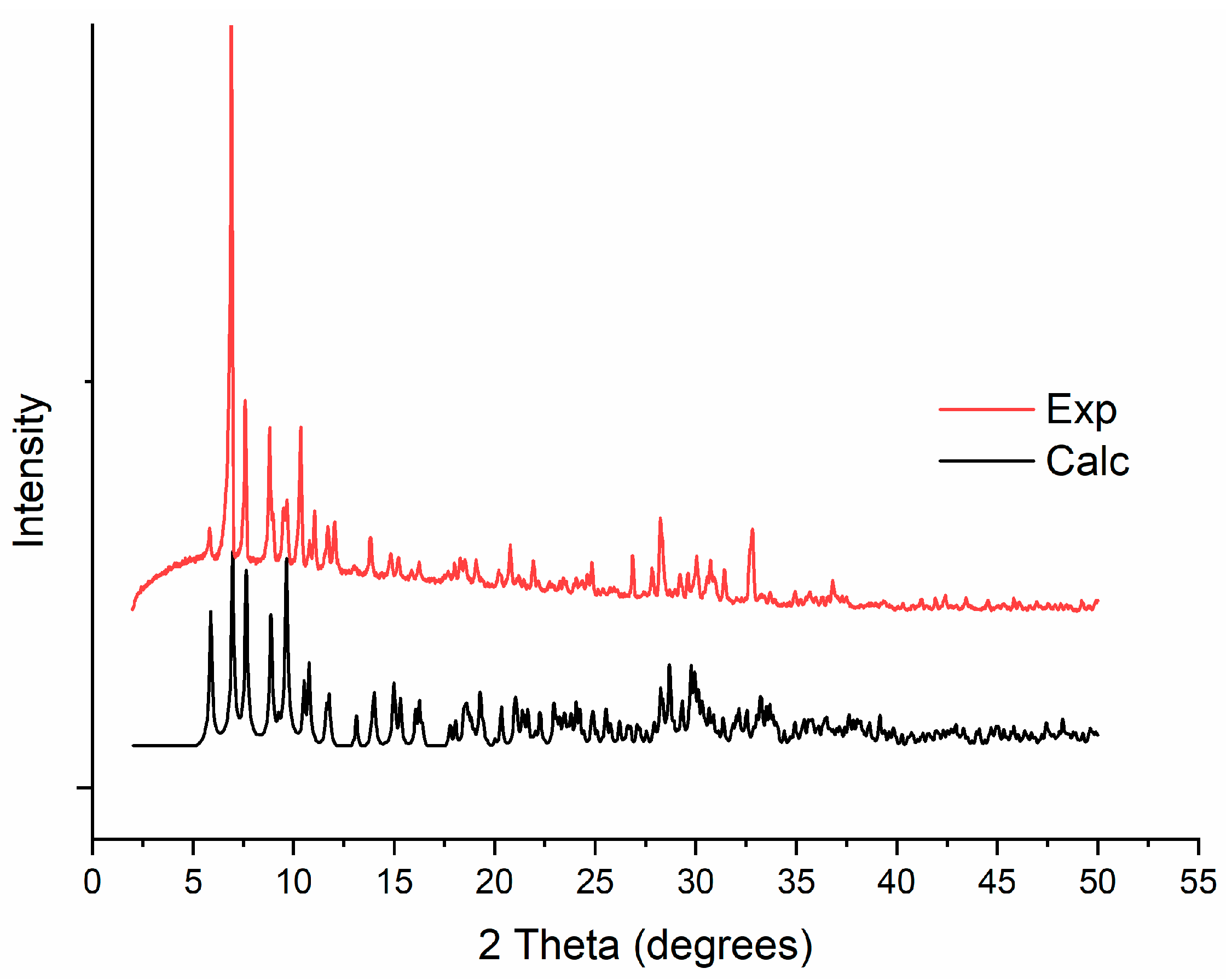 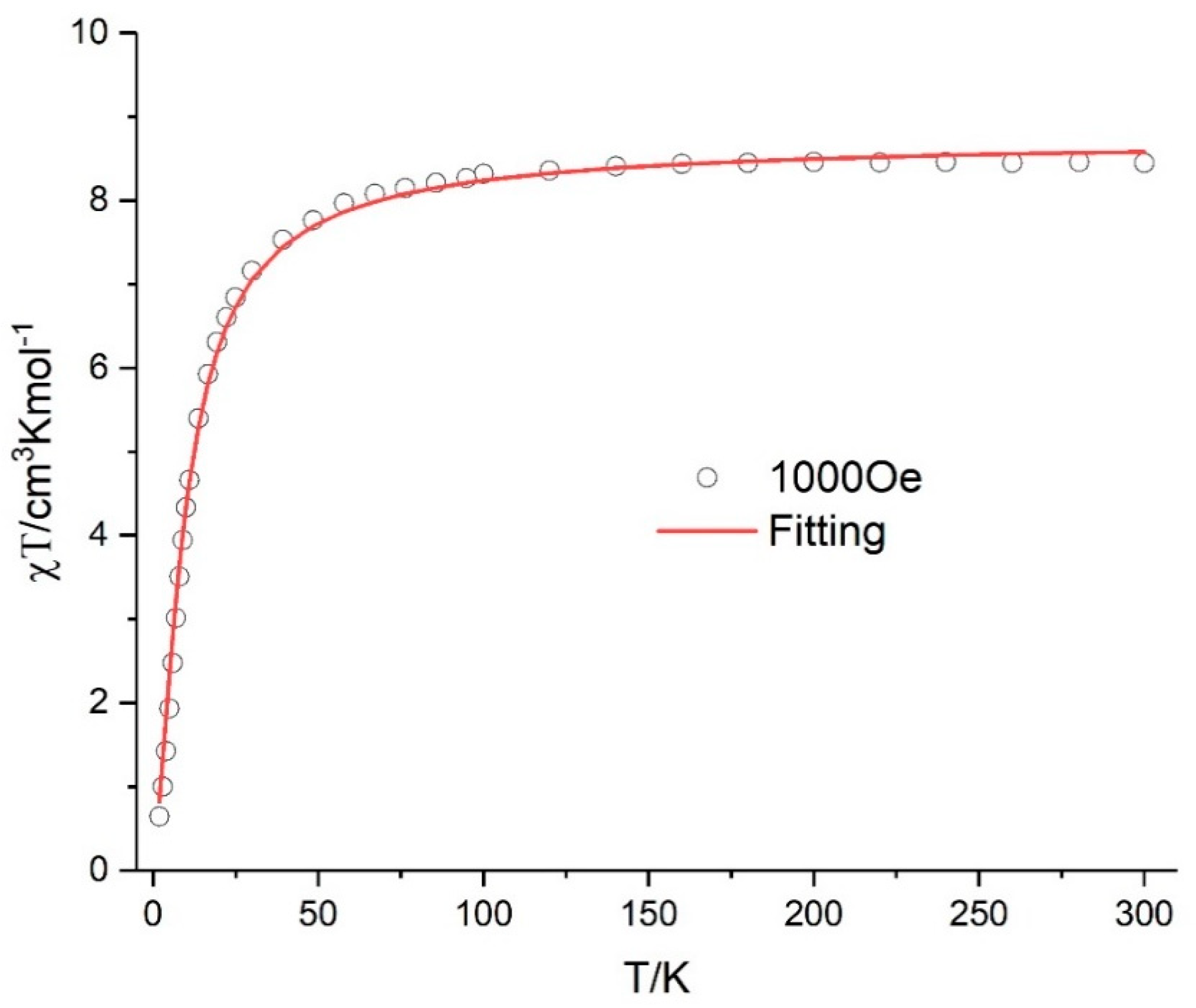 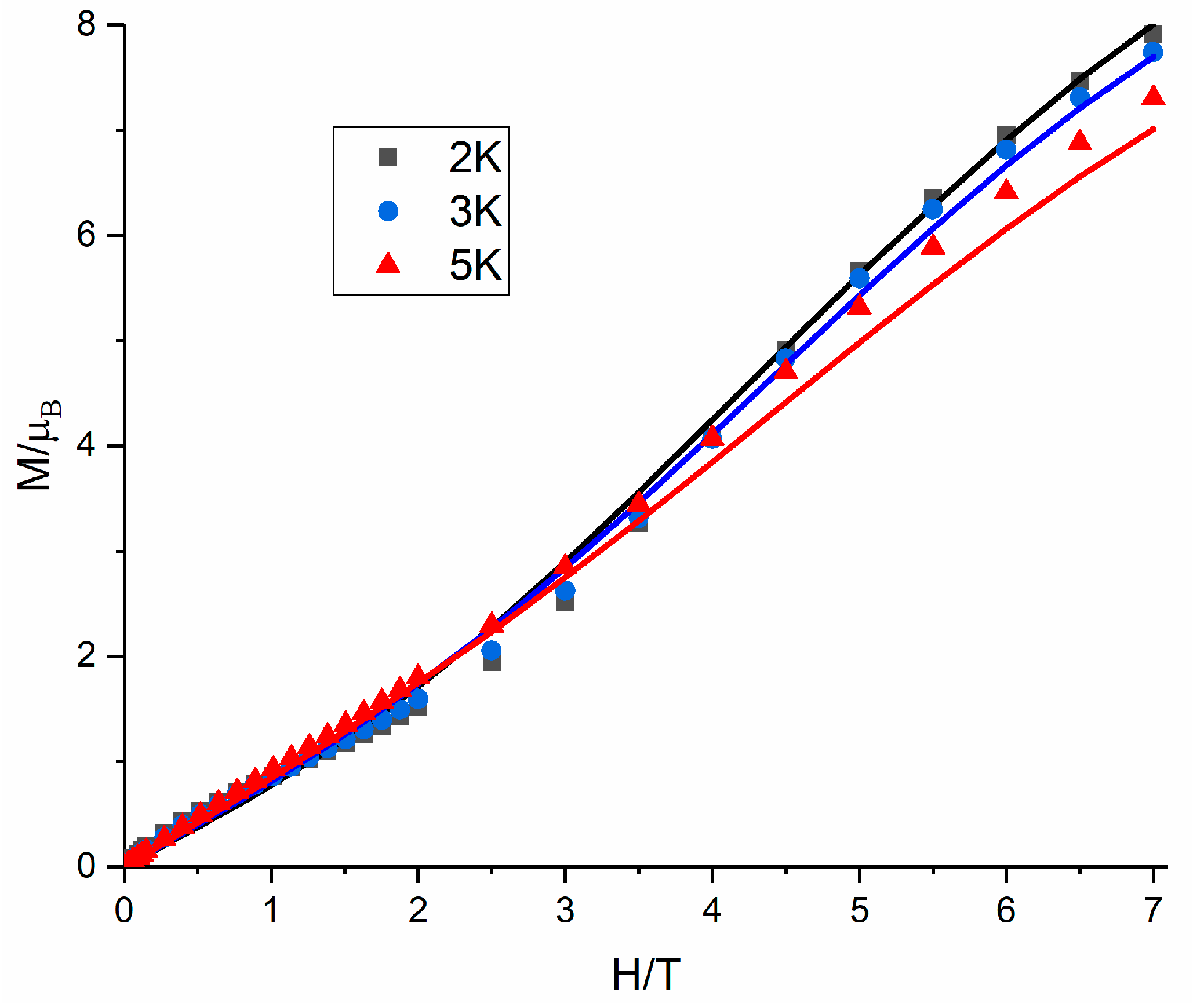