Acknowledgement to Reviewers of Magnetochemistry in 2019

One major goal in medical imaging is the elaboration of more efficient contrast agents (CAs). Those agents need to be optimized for the detection of affected tissues such as cancers or tumors while decreasing the injected quantity of agents. The paramagnetic contrast agents containing fluorine atoms can be used for both proton and fluorine magnetic resonance imaging (MRI), and they open the possibility of simultaneously mapping the anatomy using 1H MRI and accurately locating the agents using 19F MRI. One of the challenges in this domain is to synthesize molecules containing several chemically equivalent fluorine atoms with relatively short relaxation times to allow the recording of 19F MR images in good conditions. With that aim, we propose to prepare a CA containing a paramagnetic center and nine chemically equivalent fluorine atoms using a cycloaddition reaction between two building blocks. These fluorinated contrast agents are characterized by 19F NMR, showing differences in the fluorine relaxation times T1 and T2 depending on the lanthanide ion. To complement the experimental results, molecular dynamics simulations are performed to shed light on the 3D-structure of the molecules in order to estimate the distance between the lanthanide ion and the fluorine atoms. View Full-Text
Keywords: MRI; fluorine; lanthanide complexes; 1H MRI; 19F MRI; bimodal probe MRI; fluorine; lanthanide complexes; 1H MRI; 19F MRI; bimodal probe
►▼ Show Figures 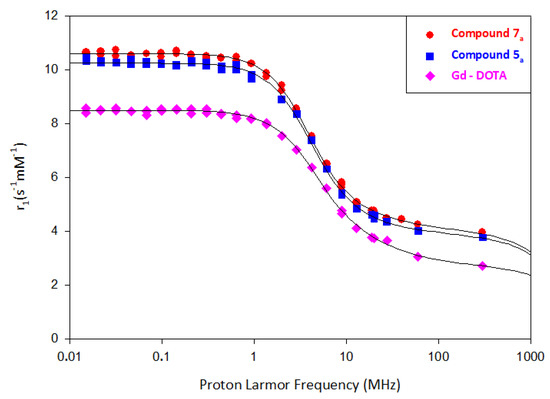