Impact of Genotype, Environment, and Malting Conditions on the Antioxidant Activity and Phenolic Content in US Malting Barley
Previous Article in Special Issue

Recently, there has been a growing interest in the role of non-Saccharomyces yeast (NSY) as a coculturing partner with Saccharomyces cerevisiae during grape must fermentation. We investigated three new strains, namely Nakazawaea ishiwadae, Candida railenensis and Debaryomyces hansenii, for their oenological potential in mixed-culture micro-vinifications with S. cerevisiae Vin13 using Muscaris grape must. None of the NSY strains impeded the fermentation performance as all the mixed-culture experiments finished at the same time. Coculturing with N. ishiwadae yielded significantly higher concentrations of ethyl and acetate esters in the final wine product. Apart from higher acetic acid levels, wines produced with C. railenensis and D. hansenii yielded much lower esters concentrations. The concentrations of certain terpenes and norisoprenoids were also significantly modulated in the mixed-culture fermentations. This study reveals the rarely reported species of N. ishiwadae as a promising coculturing partner for increasing aroma-active compounds in a wine. View Full-Text
Keywords: non-Saccharomyces yeast; Nakazawaea ishiwadae; aroma; mixed-culture fermentations; wine yeast non-Saccharomyces yeast; Nakazawaea ishiwadae; aroma; mixed-culture fermentations; wine yeast
►▼ Show Figures 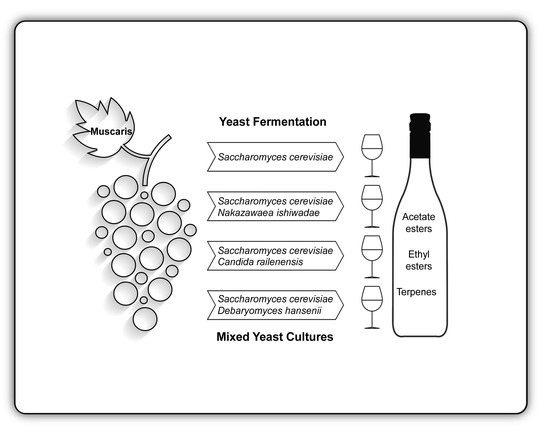