A Comparative Study of the ZnO Growth on Graphene and Graphene Oxide: The Role of the Initial Oxidation State of Carbon

The role of the oxidation state of carbon on the early stages of growth of metal oxides was studied for the particular case of ZnO deposition on graphene and graphene oxide on SiO2 (G/SiO2 and GO/SiO2, respectively) substrates. The growth was carried out by thermal evaporation of metallic Zn under an oxygen atmosphere at room temperature. This technique permits quasi-equilibrium conditions during the oxide growth, allowing the characterization of the fundamental interaction between ZnO and the graphene-based substrates. Although in both cases ZnO follows a Volmer–Weber growth mode controlled by nucleation at defects, the details are different. In the case of the GO/SiO2 substrate, the nucleation process acts as a bottleneck, limiting the coverage of the complete surface and allowing the growth of very large ZnO structures in comparison to G/SiO2. Moreover, by studying the Zn-LMM Auger spectra, it is shown how the initial nature of the substrate influences the composition of the ZnO deposit during the very early stages of growth in terms of Zn/O atomic ratio. These results are compared to those previously reported regarding ZnO growth on graphite and graphene on Cu (G/Cu). This comparison allows us to understand the role of different characteristics of graphene-based substrates in terms of number of defects, oxidation state, graphene support substrate and number of graphene layers. View Full-Text
Keywords: graphene; graphene oxide; zinc oxide; interfaces; mode of growth; XPS; AFM; factor analysis graphene; graphene oxide; zinc oxide; interfaces; mode of growth; XPS; AFM; factor analysis
►▼ Show Figures 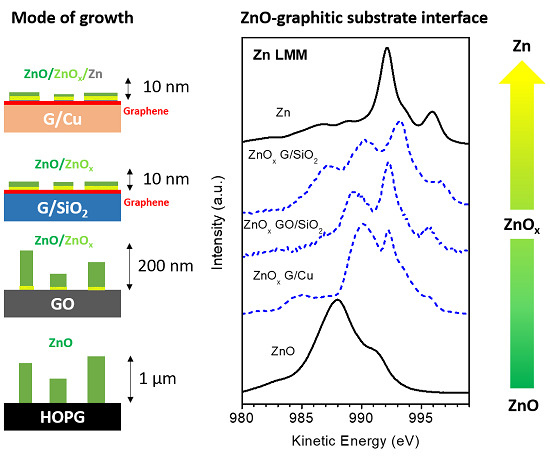