Long Non-Coding RNA Function in CD4+ T Cells: What We Know and What Next?

The non-coding genome has previously been regarded as “junk” DNA; however, emerging evidence suggests that the non-coding genome accounts for some of the greater biological complexity observed in mammals. Research into long non-coding RNAs (lncRNAs) has gathered speed in recent years, and a growing body of evidence has implicated lncRNAs in a vast range of cellular functions including gene regulation, chromosome organisation and splicing. T helper cells offer an ideal platform for the study of lncRNAs given they function as part of a complex cellular network and undergo remarkable and finely regulated gene expression changes upon antigenic stimulation. Using various knock down and RNA interaction studies several lncRNAs have been shown to be crucial for T helper cell differentiation, activation and function. Given that RNA targeting therapeutics are rapidly gaining attention, further understanding the mechanistic role of lncRNAs in a T helper context is an exciting area of research, as it may unearth a wide range of new candidate targets for treatment of CD4+ mediated pathologies. View Full-Text
Keywords: long non-coding RNA; adaptive immunity; Th cells; inflammation; infection long non-coding RNA; adaptive immunity; Th cells; inflammation; infection
►▼ Show Figures 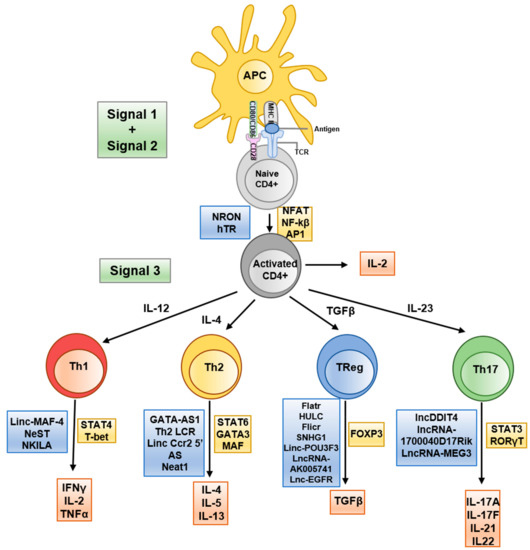