Baropycnal Work: A Mechanism for Energy Transfer across Scales

The role of baroclinicity, which arises from the misalignment of pressure and density gradients, is well-known in the vorticity equation, yet its role in the kinetic energy budget has never been obvious. Here, we show that baroclinicity appears naturally in the kinetic energy budget after carrying out the appropriate scale decomposition. Strain generation by pressure and density gradients, both barotropic and baroclinic, also results from our analysis. These two processes underlie the recently identified mechanism of “baropycnal work”, which can transfer energy across scales in variable density flows. As such, baropycnal work is markedly distinct from pressure-dilatation into which the former is implicitly lumped in Large Eddy Simulations. We provide numerical evidence from 1024 direct numerical simulations of compressible turbulence. The data shows excellent pointwise agreement between baropycnal work and the nonlinear model we derive, supporting our interpretation of how it operates. View Full-Text
Keywords: multiscale; energy transfer; cascade; turbulence; variable density flow; baroclinic vortex generation multiscale; energy transfer; cascade; turbulence; variable density flow; baroclinic vortex generation
►▼ Show Figures 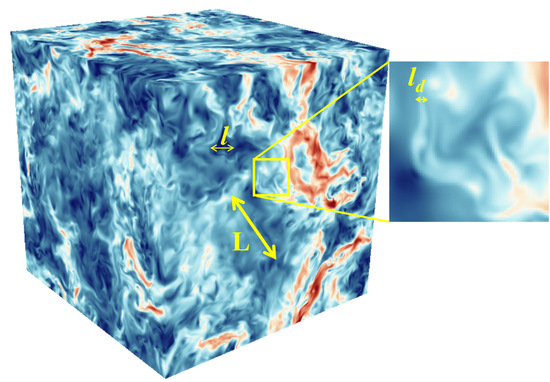