Visualization of convective heat transfer processes in aero- and hydrodynamics has always been of considerable interest [1,2,3,4,5]. The improvement of infrared thermometry and the availability of infrared cameras have caused a rapid development in this field in recent years. However, the study of thermal convection around hot objects moving in air is still associated with technical difficulties. In this paper, we demonstrate the visualization of thermal convection around an oscillating thin cylindrical heater.
The combination of thermal oscillations and mechanical vibrations is customarily termed thermomechanical oscillations (TMOs). Similar oscillations are observed in systems where bodies at a temperature , differing from the medium ambient temperature , are in periodic motion. The simplest model of such a system is a hot cord vibrating in air. Since the rate of cooling of a heated body in a liquid or a gas increases as the relative velocity V increases, the coefficient of heat transfer depends on V: . According to the theory of heat transfer under conditions of transverse flow around a hot cylinder (in the regions of small Re numbers), holds [5,6,7] where is the Nusselt number, and is the Reynolds number. Therefore, the coefficient of heat transfer is connected to the velocity V of the moving hot body via where is the coefficient of heat transfer of a stationary body, and h is a constant that depends on its geometry as well as on its thermo-physical properties. The higher the amplitude or the frequency of the mechanical oscillation, the higher the velocity and thus the heat transfer. This should remain valid when the flow changes from laminar to turbulent and the velocity dependence of deviates from that in Equation (2). The good agreement of these formulas and experimental data of TMO is demonstrated in [8]. As a consequence, the intensity of heat transfer from the heated cylinder oscillating transversely to the cold medium changes periodically and so does its temperature. The oscillation of temperature in turn leads to pulsations of the heater’s shape and dimensions so that mechanical vibrations arise. In other words, in such systems, thermal oscillations feed back to non-thermal oscillations and vice versa (for more details on TMO we refer the reader to [9]). Under certain conditions, they can reinforce each other, leading to the appearance of resonance effects [8,9,10,11,12,13,14,15,16].

We studied the heat transfer around a thin cylindrical horizontal heater in air during TMO using a special set-up (see Figure 1). The thermomechanical vibratory system is realized by a stretched wire heated by a dc-current (1). As is known, it is possible to excite parametric resonance by modulating some of the vibrational parameters of the system. In our case, these are the combined mechanical and thermal effects on the linear dimensions of the cord—the variation of the applied stress and of the stress due to thermal expansion and contraction (the latter effect may be quite complicated due to turbulence or to a shedding of thermal plumes). As an external modulator (4), a low-frequency loudspeaker generates pulsations of wire tension of frequency and thus also provides the initial excitation. At certain excitation frequencies , the wire starts to perform transverse oscillations of frequencies , resulting in a modulation of heat transfer (see above). An alternative way to excite a resonance without using the modulator is to vary the pre-stress of the heated wire until a stable resonance occurs.
We used Cr20Ni80 and Kanthal-A wires with diameters d from 0.3 to 0.6 mm and lengths L from 2000 to 3900 mm. The heating current was furnished by a Heinzinger 80-1200 (Heinzinger electronic GmbH, Rosenheim, Germany) DC source (7). In this way, the temperature difference between the surrounding medium and a fixed heater could be changed from 50 to . The initial normal stress (tension) of the wire was applied via a micrometer screw mechanism (2). The tension modulations were varied in intervals of 35 MPa using the electrodynamical head of the low-frequency loudspeaker Earthquake DBXi-15 (Earthquake Sound Corp., Hayward, CA, USA) (4). The loudspeaker’s head received electric pulsing from a generator Toellner TOE 7704 (TOELLNER Electronic Instrumente GmbH, Herdecke, Germany), which was combined with an amplifier Kampo SUB-100A (Conrad Electronic SE, Hirschau, Germany) and an impulse counter Toellner TOE 6705 (TOELLNER Electronic Instrumente GmbH). In this way, sinusoidal and rectangular pulsing with a repetition frequency from 0 to 30 Hz was applied. The variable normal stress of the oscillating thin heater was recorded by a quartz force sensor (“Kistler Instrumente AG” Quartz Force Sensor Type 9207, Winterthur , Switzerland) (8) combined with an amplifier (“Kistler Instrumente AG” Charge Amplifier Type 5073A, with software “Kistler Instrumente AG” ManuWare v.1.0.2). The longitudinal displacements of the loudspeaker membrane were recorded by a mini accelerometer (“Brüel and Kjær” DeltaTronTM 4397A, Nærum, Denmark) (3), which was fixed on the cone of the loudspeaker. In addition, an optical system with a photomultiplier FEU-85 (MELZ FEU, Moscow, Russia) was used (5). The transverse vibrations of the wire were measured by another photomultiplier FEU-85 (9) with an optical system (20,22,23,24). The time-averaged temperature at an arbitrary point of the thin wire heater was monitored by an infrared photo-camera (FLIR T335) (25) with a post-processing program FLIR ResearchIR Max v.3.1 (FLIR Systems, Inc., Wilsonville, OR, USA). Temperature oscillations on the heater surface were measured by the infrared thermometer Optris CTLaser 3MH-CF1 (Optris Infrared Sensing, LLC, Portsmouth, NH, USA) (10) with software CompactConnect v.1.8.6.15 (Optris Infrared Sensing, LLC, Portsmouth, NH, USA). This IR-thermometer can measure the temperature only in one point, although it is possible to micrometrically move it along the cord. Two multichannel oscilloscopes LeCroy WaveSurfer 64Xs (LeCroy Corporation, Chestnut Ridge, NY, USA) and ”Hameg Instruments” HM 1508-2 (HAMEG Instruments GmbH, Mainhausen, Germany) (19) displayed the signals from the sensors using the software HMLab v.1.08 (HAMEG Instruments GmbH, Mainhausen, Germany). The visual control of TMO was implemented with the aid of a ”Conrad Electronic SE” (Hirschau, Germany) USB microscope camera 500x DSO-P03 (21).
We have visualized the convective air flows around the oscillating heater employing Schlieren photography with a symmetric arrangement of illuminant and photosensor relative to the concave mirror’s optical axis. Such a two-dimensional model of visualization is fully justified since steady state (stationary) elastic TMOs always occur in a vertical plane, which has been noted in a number of works [9,11,12,13,15,16]. Exceptions occur, e.g., in the areas of the parametric instability of the TMO, resulting in an enhanced heat transfer. However, the data we present only refer to situations where we observed vertical in-plane oscillations (up and down) of the wire. In our case, a Dobson-telescope ‘parabolic main mirror 8’ (“Galaxy”, type D8K, aperture ratio f/6, diameter D = 200 mm, focal length f = 1200 mm, BK7) (6) mounted on a multi-positional table was used. A high-power light-emitting diode (LED) (140,000 mcd) (13) with optics (11,12) served as a point light source. The light beams are reflected by the parabolic mirror and pass through the area of convective flows. They are focused on the blade of a Foucault’s knife (18) disposed on 2f distance from the parabolic mirror (f: focus length). Then the beam is divided by a semitransparent plane mirror (15) into two directions—one way to a digital photocamera Nikon D5100 (CMOS-Sensor 16,9 MPix, (Nikon Corporation, Tokyo, Japan)) with teleobjective Jupiter-37A (14), the other way to a photomultiplier FEU-110 (Ekran Optical Systems, Novosibirsk, Russia) (17), displaying velocities and density changes of the convection streams.

The experimental set-up presented offers the possibility to study the physical processes during thermomechanical oscillations of thin heaters. In particular, we have demonstrated the visualization of convective heat transfer in and out of resonance using a rather simple set-up of high sensitivity. In the future, it will be interesting to study, e.g., whether there is a phase shift between mechanical and thermal oscillations.

In our experimental work, the conceptualization was constructed by S.N. and R.P. For methodology, validation, formal analysis, and supervision S.N. was responsible. S.N. also wrote the review. The project administration, resources, software, and main editing were performed by R.P. The investigation and the data curation were made by R.P., D.G., and T.G. The visualization of the experiments was created by D.G. 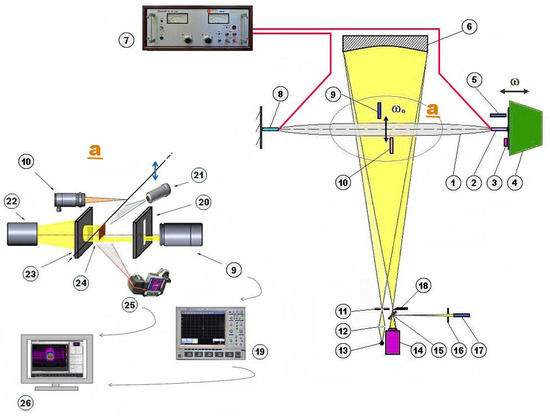 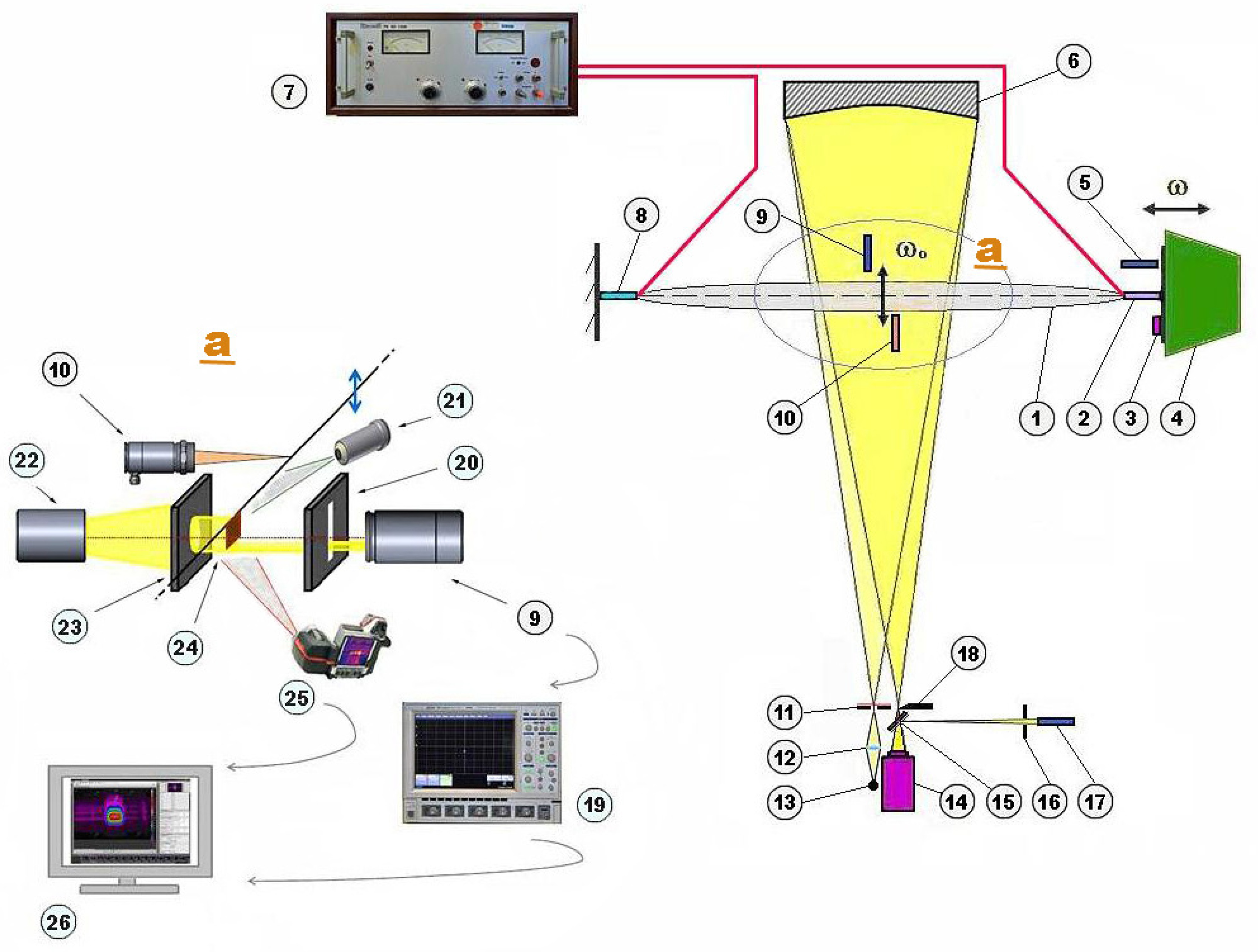 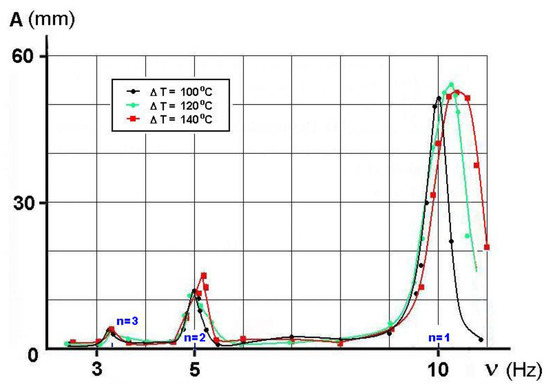 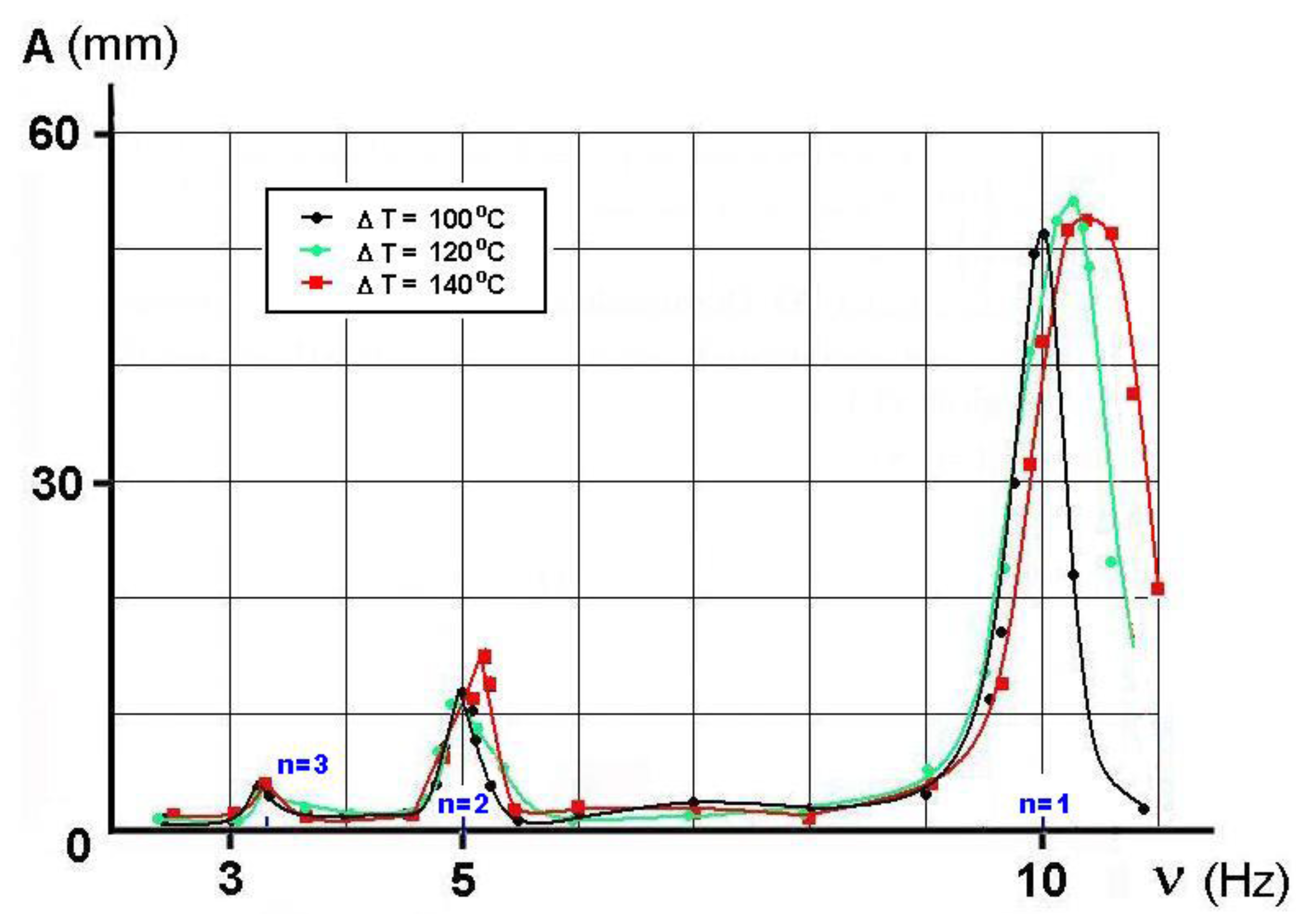 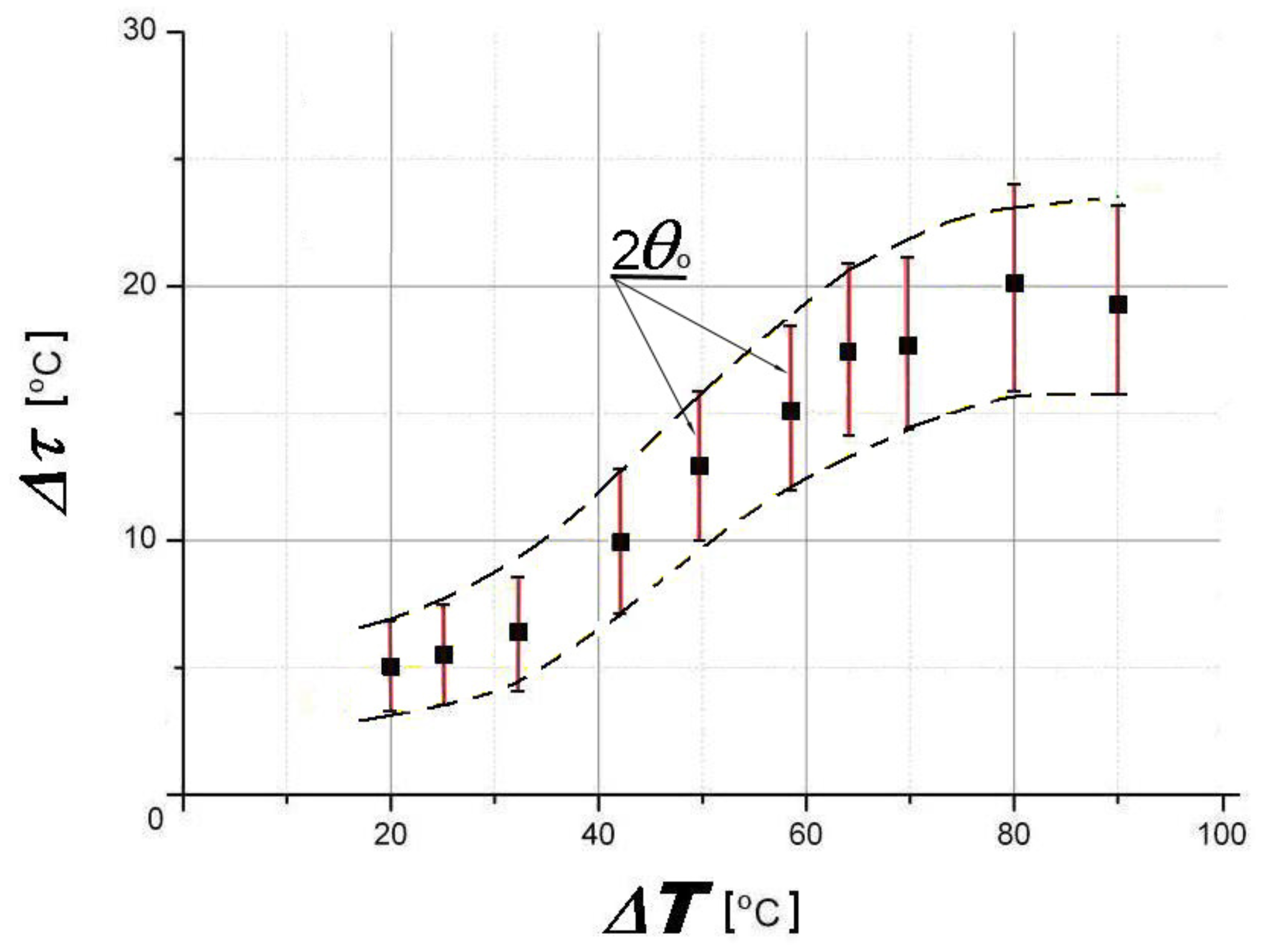 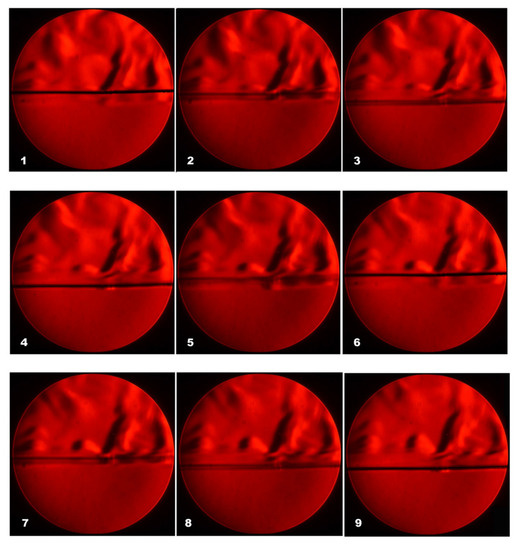 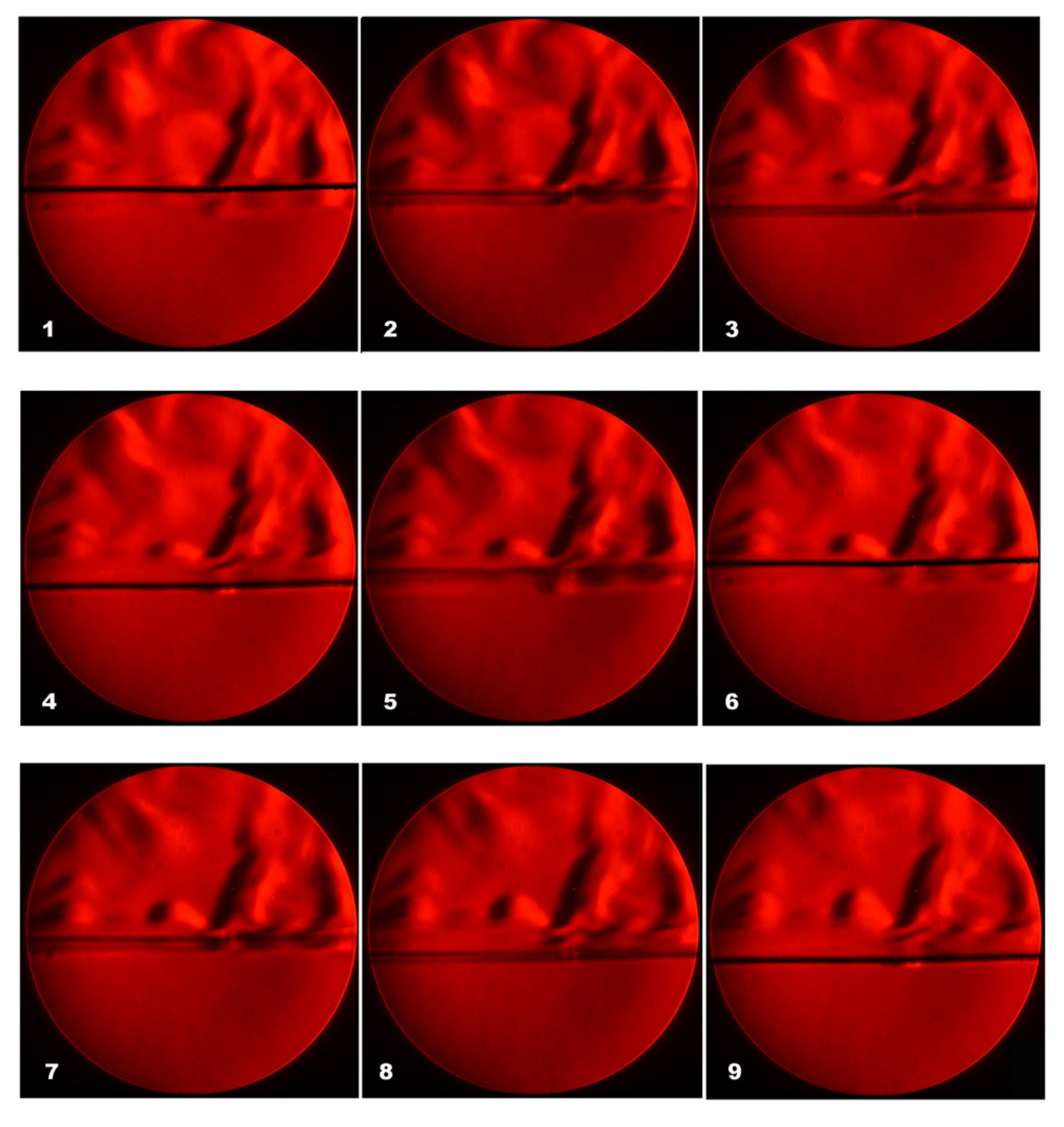