Dual Solutions in a Boundary Layer Flow of a Power Law Fluid over a Moving Permeable Flat Plate with Thermal Radiation, Viscous Dissipation and Heat Generation/Absorption
Next Article in Special Issue

Improving Accuracy in α-Models of Turbulence through Approximate Deconvolution

In the present paper, direct numerical simulation (DNS) and particle image velocimetry (PIV) have been applied complementarily in order to generate a database of near-wall turbulence properties of a highly turbulent jet impinging on a solid surface under different inclination angles. Thereby, the main focus is placed on an impingement angle of , since it represents a good generic benchmark test case for a wide range of technical fluid flow applications. This specific configuration features very complex flow properties including the presence of a stagnation point, development of the shear boundary layer and strong streamline curvature. In particular, this database includes near-wall turbulence statistics along with mean and rms velocities, budget terms in the turbulent kinetic energy equation, anisotropy invariant maps, turbulent length/time scales and near-wall shear stresses. These properties are useful for the validation of near-wall modeling approaches in the context of Reynolds-averaged Navier–Stokes (RANS) and large-eddy simulations (LES). From this study, in which further impingement angles (, ) have been considered in the experiments only, it turns out that (1) the production of turbulent kinetic energy appears negative at the stagnation point for an impingement angle other than and is balanced predominantly by pressure-related diffusion, (2) quasi-coherent thin streaks with large characteristic time scales appear at the stagnation region, while the organization of the flow is predominantly toroidal further downstream, and (3) near-wall shear stresses are low at the stagnation region and intense in regions where the direction of the flow changes suddenly. View Full-Text
Keywords: database; impinging jet; direct numerical simulation; particle image velocimetry database; impinging jet; direct numerical simulation; particle image velocimetry
►▼ Show Figures 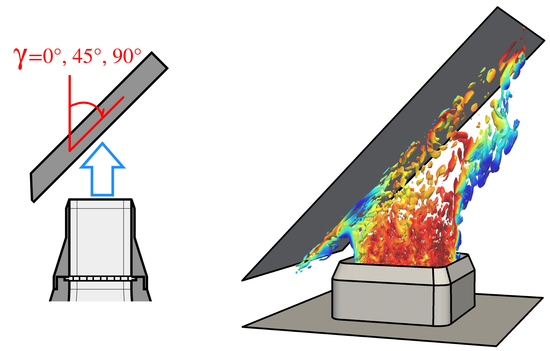