Reply to “Comment on Tailleux, R. Neutrality Versus Materiality: A Thermodynamic Theory of Neutral Surfaces. Fluids 2016, 1, 32.”
Previous Article in Journal

Tailleux has written about the concept of epineutral mixing and has attempted to justify it from an energetic viewpoint. However, Tailleux’s approach is incorrect because it ignores the unsteady nature of the density field during baroclinic motions, which in turn leads to incorrect conclusions. Tailleux also asserts that “adiabatic and isohaline parcel exchanges can only be meaningfully defined on material surfaces” that are functions of only Absolute Salinity and Conservative Temperature and are not separately a function of pressure. We disagree with this assertion because there is no physical reason why the ocean should care about a globally-defined function of Absolute Salinity and Conservative Temperature that we construct. Rather, in order to understand and justify the concept of epineutral mixing, we consider the known physical processes that occur at the in situ pressure of the mixing. The Tailleux paper begins with two incorrect equations that ignore the transience of the ocean. These errors echo throughout Tailleux, leading to sixteen conclusions, most of which we show are incorrect. (Comment on Tailleux, R. Neutrality Versus Materiality: A Thermodynamic Theory of Neutral Surfaces. Fluids 2016, 1, 32, doi:10.3390/fluids1040032.) View Full-Text
Keywords: ocean mixing; dianeutral mixing; mesoscale eddies; lateral stirring ocean mixing; dianeutral mixing; mesoscale eddies; lateral stirring
►▼ Show Figures 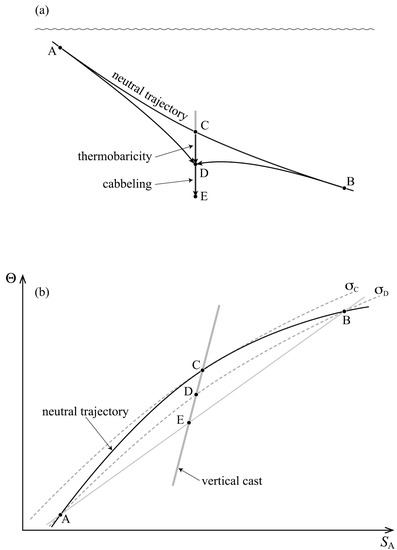