The hygromycin B phosphotransferase gene from Escherichia coli and the pyrithiamine resistance gene from Aspergillus oryzae are two dominant selectable marker genes widely used to genetically manipulate several fungal species. Despite the recent development of CRISPR/Cas9 and marker-free systems, in vitro molecular tools to study Aspergillus fumigatus, which is a saprophytic fungus causing life-threatening diseases in immunocompromised hosts, still rely extensively on the use of dominant selectable markers. The limited number of drug selectable markers is already a critical aspect, but the possibility that their introduction into a microorganism could induce enhanced virulence or undesired effects on metabolic behavior constitutes another problem. In this context, here, we demonstrate that the use of ptrA in A. fumigatus leads to the secretion of a compound that allows the recovery of thiamine auxotrophy. In this study, we developed a simple modification of the two commonly used dominant markers in which the development of resistance can be controlled by the xylose-inducible promoter PxylP from Penicillium chrysogenum. This strategy provides an easy solution to avoid undesired side effects, since the marker expression can be readily silenced when not required. View Full-Text
Keywords: dominant selectable marker; Aspergillus fumigatus; inducible marker; hph; ptrA; xylanase promoter; thiamine; hygromycin; pyrithiamine dominant selectable marker; Aspergillus fumigatus; inducible marker; hph; ptrA; xylanase promoter; thiamine; hygromycin; pyrithiamine
►▼ Show Figures 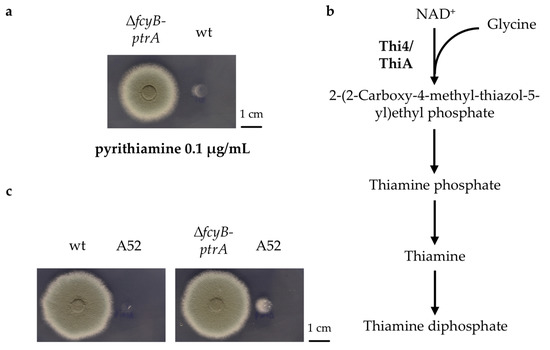