Magnaporthiopsis maydis is the causal agent of severe maize late wilt disease. Disease outbreak occurs at the maize flowering and fruit development stage, leading to the plugging of the plant’s water vascular system, resulting in dehydration and collapse of the infected host plant. The pathogen is borne by alternative hosts, infected seeds, soil, and plant residues and gradually spreads to new areas and new countries. However, no soil assay is available today that can detect M. maydis infestation and study its prevalence. We recently developed a molecular quantitative Real-Time PCR (qPCR) method enabling the detection of the M. maydis DNA in plant tissues. Despite the technique’s high sensitivity, the direct examination of soil samples can be inconsistent. To face this challenge, the current work demonstrates the use of a soil bioassay involving the cultivation of a hyper-susceptible maize genotype (Megaton cultivar, Hazera Seeds Ltd., Berurim MP Shikmim, Israel) on inspected soils. The use of Megaton cv. may facilitate pathogen establishment and spread inside the plant’s tissues, and ease the isolation and enrichment of the pathogen from the soil. Indeed, this cultivar suffers from severe dehydration sudden death when grown in an infested field. The qPCR method was able to accurately and consistently identify and quantify the pathogen’s DNA in an in vitro seed assay after seven days, and in growth-chamber potted plants at as early as three weeks. These results now enable the use of this highly susceptible testing plant to validate the presence of the maize late wilt pathogen in infested soils and to evaluate the degree of its prevalence. View Full-Text
Keywords: bioassay; Cephalosporium maydis; crop protection; fungus; Harpophora maydis; late wilt; Magnaporthiopsis maydis; sensitive cultivar; soil assay bioassay; Cephalosporium maydis; crop protection; fungus; Harpophora maydis; late wilt; Magnaporthiopsis maydis; sensitive cultivar; soil assay
►▼ Show Figures 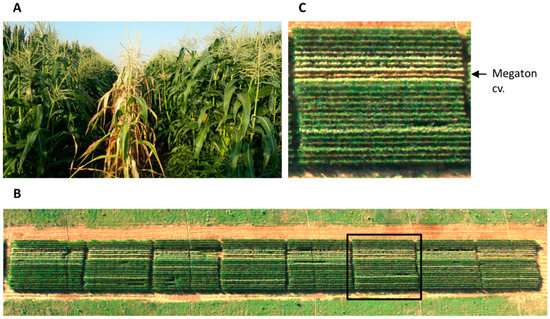