Blood Aspergillus PCR: The Good, the Bad, and the Ugly
Previous Article in Journal / Special Issue

Guidelines on the diagnosis and management of Aspergillus disease recommend a multi-test approach including CT scans, culture, fungal biomarker tests, microscopy and fungal PCR. The first-line treatment of confirmed invasive aspergillosis (IA) consists of drugs in the azole family; however, the emergence of azole-resistant isolates has negatively impacted the management of IA. Failure to detect azole-resistance dramatically increases the mortality rates of azole-treated patients. Despite drug susceptibility tests not being routinely performed currently, we suggest including resistance testing whilst diagnosing Aspergillus disease. Multiple tools, including DNA sequencing, are available to screen for drug-resistant Aspergillus in clinical samples. This is particularly beneficial as a large proportion of IA samples are culture negative, consequently impeding susceptibility testing through conventional methods. Pyrosequencing is a promising in-house DNA sequencing method that can rapidly screen for genetic hotspots associated with antifungal resistance. Pyrosequencing outperforms other susceptibility testing methods due to its fast turnaround time, accurate detection of polymorphisms within critical genes, including simultaneous detection of wild type and mutated sequences, and—most importantly—it is not limited to specific genes nor fungal species. Here we review current diagnostic methods and highlight the potential of pyrosequencing to aid in a diagnosis complete with a resistance profile to improve clinical outcomes.
Keywords: Aspergillus fumigatus; antifungal drug resistance; cyp51A; azole resistance; diagnostics; pyrosequencing Aspergillus fumigatus; antifungal drug resistance; cyp51A; azole resistance; diagnostics; pyrosequencing

Aspergillosis is a fungal infection typically acquired via the inhalation of Aspergillus spores. It is most often caused by A. fumigatus and its various forms affect millions of people worldwide [1]. In immunocompetent hosts, these moulds cause a localized infection mainly in the lungs or paranasal sinuses. In immunocompromised individuals, the inhalation of spores can lead to a life-threatening invasive respiratory infection and dissemination to other organs. This invasive manifestation of aspergillosis (IA) is most life-threatening, with mortality rates varying between 50% when treated promptly and above 80% when the treatment is delayed [1,2,3,4,5].
When suspecting IA, the guidelines recommend a computed tomography (CT) scan to detect pulmonary infiltrates [6,7,8,9]. Nodules surrounded by a ground-glass attenuation (halo sign) and pleural effusions are classical CT findings of IA. Serum and bronchoalveolar lavage (BAL) samples should be sent for galactomannan (GM) testing and for PCR targeting Aspergillus-specific 18S rDNA [10,11]. Parallel testing for serum β-1-3-d-glucan (BDG) improves specific detection. When used in combination, these tests provide adequate sensitivity and specificity to guide antifungal treatment [6,8,12]. Direct microscopy of BAL or biopsy materials using fluorescent dyes can rapidly detect an invasive mould infection, but cannot provide a definitive diagnosis. Therefore, samples should also be sent for fungal culture, identification and susceptibility testing. However, culture is a slow and insensitive method, although its sensitivity can be improved by increasing the culture volume [13,14]. The EQUAL Aspergillosis Score 2018 is a stewardship tool summarising the key aspects of the ESCMID IA guidelines. [15].
A neutropenic haematology patient presenting with fever, chest pain and a cough, and suspected of IA when they are not responding to broad-spectrum antibiotic treatment, is a common clinical scenario. They typically have abnormal CT findings suggestive of IA; their serum and/or BAL is positive for one or more of the biomarkers, but the culture is reported with no fungal growth. The patient is started on first-line empiric treatment with voriconazole or isavuconazole [6,8]. With the rise of azole-resistant A. fumigatus strains, it is not rare that the patient fails to respond to the treatment due to antifungal resistance [16,17,18,19,20,21,22]. This is seen in patients who have been on azole prophylaxis (e.g., posaconazole) but increasingly also in azole-naïve patients. Annual surveys in five academic hospitals in the Netherlands showed that azole resistance in A. fumigatus has doubled from 2014 to 2018 [23,24]. Similar data have been reported worldwide [25,26,27,28,29,30,31,32,33,34,35], and an international resistance surveillance group has been set up by ISHAM/ECMM to capture more information on azole resistance worldwide [36,37].
Currently, the only method recommended by the guidelines to detect azole resistance in patients suspected of having an infection caused by azole-resistant A. fumigatus is susceptibility testing by culture [6,8,38,39]. However, more than half of BAL cultures are reported with no fungal growth and IA diagnosis is made based on radiology, fungal biomarker and molecular test results which do not provide information on resistance [40,41,42,43]. In these cases, failure to respond to treatment is often the only evidence of resistance to the given drugs. On the other hand, even in the case of a positive culture and access to susceptibility testing or resistance screening, the turnaround times for these culture-based methods are long, and the delivery of results in clinically useful time frame is challenging. Particularly in smaller centres, where susceptibility testing is not available on site, this timeline often exceeds one week [39,44].
The outcome of IA depends on the early initiation of effective treatment. This relies on rapid detection of antifungal resistance. Failure to detect azole resistance leads to significantly increased mortality rates in azole-treated patients [45]. Here, we describe the available methods for the detection of azole resistance in A. fumigatus, with a focus on a novel pyrosequencing-based method using the A. fumigatus cyp51A target. This method can detect any polymorphisms in critical genes, provide epidemiological data on azole resistance and also provide a quick and reliable diagnosis in culture-negative cases.

Mutations in genes involved in the A. fumigatus ergosterol biosynthetic pathway, including hmg1, erg6, cyp51A and cyp51B among others, are described as having a role in azole resistance [26,46,47,48,49,50,51]. The means for testing non-cyp51A-mediated mechanisms of resistance lag far behind and therefore, for the purpose of this discussion, we concentrate on cyp51A. Azole-resistant strains harbour genes with specific point mutations in combination or absence of tandem repeats in the promoter region. Aspergillus species are intrinsically resistant to fluconazole and ketoconazole due to a naturally occurring point mutation in cyp51A, encoding lanosterol 14-α-sterol demethylase [52]. Polymorphisms in cyp51A are frequently described as the main resistance mechanism arising from long-term azole use, associated with chronic aspergillosis [27,28,53]. Alternatively, the most common pan-azole resistance mechanism in A. fumigatus cyp51A was found to be a combination of a 34-bp long tandem repeat (TR) in the promoter region and a leucine-to-histidine change at codon 98, in short TR34/L98H [54,55,56,57,58,59]. The TR46/Y121F/T289A is a less widespread but emerging azole resistance mutation, which was first reported in the Netherlands in 2009 [60]. Both resistance mechanisms are regularly recovered from environmental isolates worldwide [31,61,62,63,64,65,66,67,68,69,70,71], and therefore are likely to have developed resistance from the substantial use of environmental azole fungicides [31,55,69,72,73,74,75,76,77,78]. In 2017, the first azole-resistant A. fumigatus cyp51A TR46/Y121F/T289A mutant was isolated in the UK from a patient that had no prior history of azole antifungal use, suggesting resistance must have been acquired through the environment [79]. The global prevalence of environmental azole-resistant A. fumigatus strains is a major concern for all, but particularly susceptible patients.
Numerous single point mutations in A. fumigatus cyp51A lead to resistance, where the most common include amino acid substitutions of glycine at codon 54 (G54), proline at codon 216 (P216), phenylalanine at codon 219 (F219), methionine at codon 220 (M220), and glycine at codon 448 (G448) (Table 1) ([18,26,54,80,81,82,83,84,85,86,87,88,89,90,91,92,93] and reviewed in [94]). Other resistance mechanisms are described to be a combination of point mutations or the less common TR53 [89,95,96,97,98,99,100,101,102].

Molecular tests for the detection of azole-resistant cyp51A genotypes of A. fumigatus in clinical specimens have been developed over the past 20 years. Numerous in-house assays ranging from nested PCR, mixed-format and real-time PCR approaches have been developed and tested [103,104,105,106,107,108,109,110]. Other molecular approaches (reviewed in [105]) include the analysis of high resolution melt curves [111,112]. However, despite all this work, only three commercial kits are currently available (AsperGenius, PathoNostics, Maastricht, Netherlands, MycoGENIE, Ademtech, Pessac, France and Fungiplex® Aspergillus Azole-R IVD PCR, Bruker Daltonik GmbH, Bremen, Germany), attesting to the difficulty of developing robust molecular assays [113]. All three commercial real-time PCRs (RT-PCR) are designed to identify the promoter region insertion polymorphisms TR34/L98H and TR46/Y121F/T289A and specific alleles [109,114,115,116,117,118,119]. Approaches targeting polymorphisms in the cyp51A open reading frame (ORF, e.g., G54, M220, G138, G448) [120,121,122] have lagged behind.
Pyrosequencing is an alternative molecular method, which can be used to screen for all known polymorphisms [123]. This DNA sequencing technique has recently been optimised to screen clinical respiratory samples and A. fumigatus isolates for both insertion and ORF cyp51A-associated polymorphisms [124]. The efficacy of pyrosequencing to detect resistance in respiratory samples from patients with chronic pulmonary aspergillosis (CPA) was demonstrated in a recent audit of UK National Aspergillosis Centre (NAC) cases [125]. Resistance was identified in almost a quarter of culture negative samples, translating to a significant number of resistant cases that would have been missed had pyrosequencing not been used.

In summary, the incidence of azole-resistant Aspergillus infections and the associated poor clinical outcomes make screening for resistance mechanisms crucial in the management of aspergillosis. A combination of tests is needed to assure effective treatment and allow antifungal stewardship. Commercially available PCR assays can be useful for time-pressing samples in smaller clinical laboratories, but the range of polymorphisms they are designed to detect is very limited. Pyrosequencing is a promising in-house DNA sequencing method that can be used to screen for genetic hotspots associated with antifungal resistance rapidly and is not limited to specific genes nor fungal species. The rise of antifungal resistance is ongoing, and new mutations associated with resistance might be missed without a sequence-based approach. In addition to the analysis of cyp51A, this method can easily be exploited to look at other genes that play a role in either azole resistance or resistance against other antifungal drugs. Laboratories that do not have real-time thermocyclers or the capacity for in-house sequencing should consider sending their samples for sequencing to either mycology reference centres or companies providing sequencing services. Rapid and reliable diagnosis is important for survival of IA patients and screening clinically relevant samples will provide important epidemiological data on A. fumigatus.

All authors participated in literature review and writing. All authors have read and agreed to the published version of the manuscript.

This research was co-funded by the NIHR Manchester Biomedical Research Centre and NHS England.

The authors would like to thank all members of the Mycology Reference Centre Manchester (MRCM) team and the National Aspergillosis Centre (NAC) team for their support. 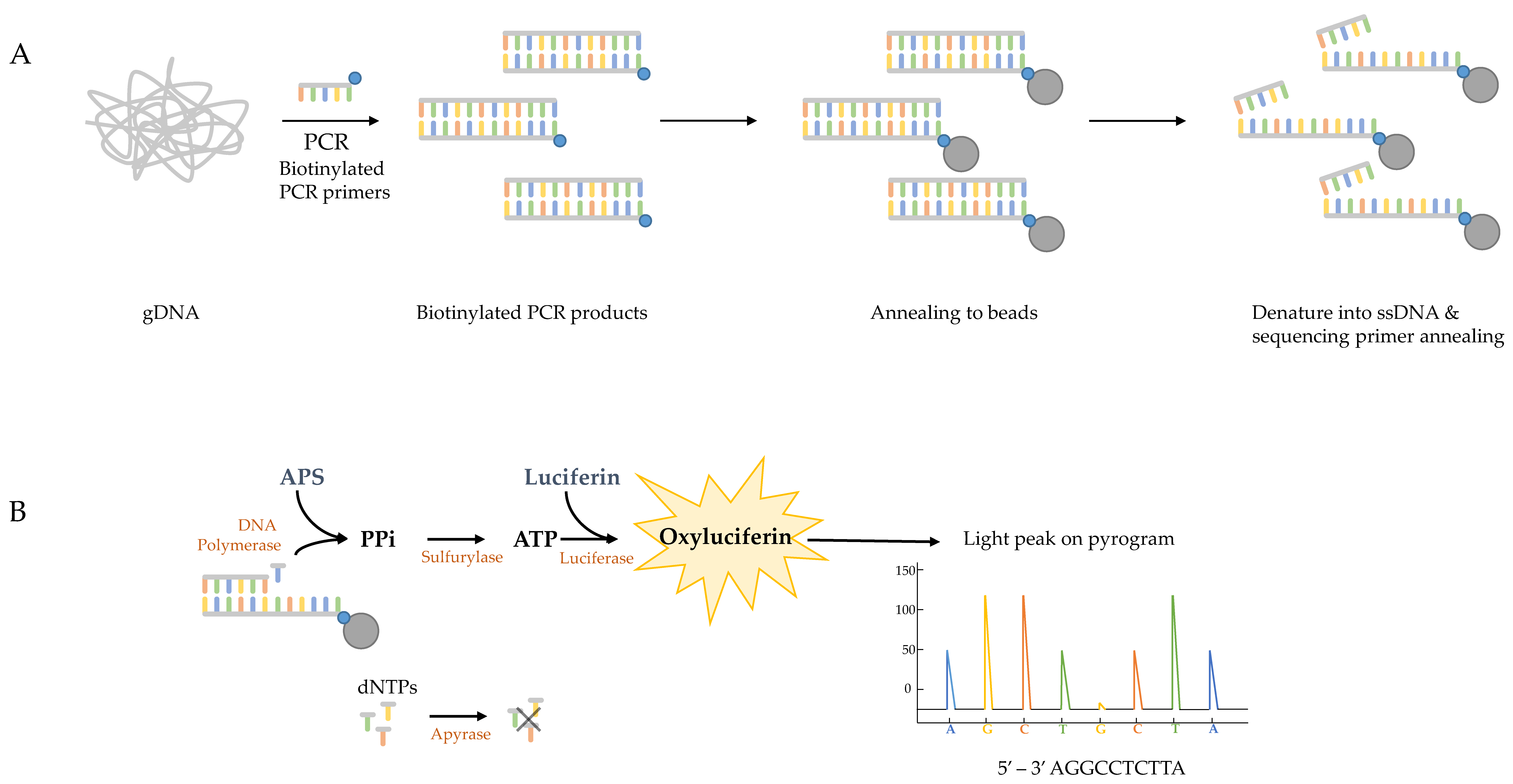 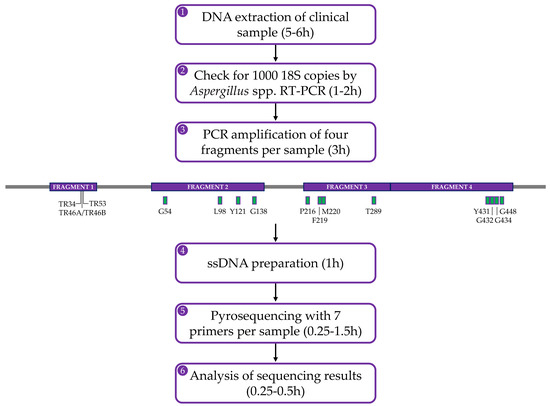 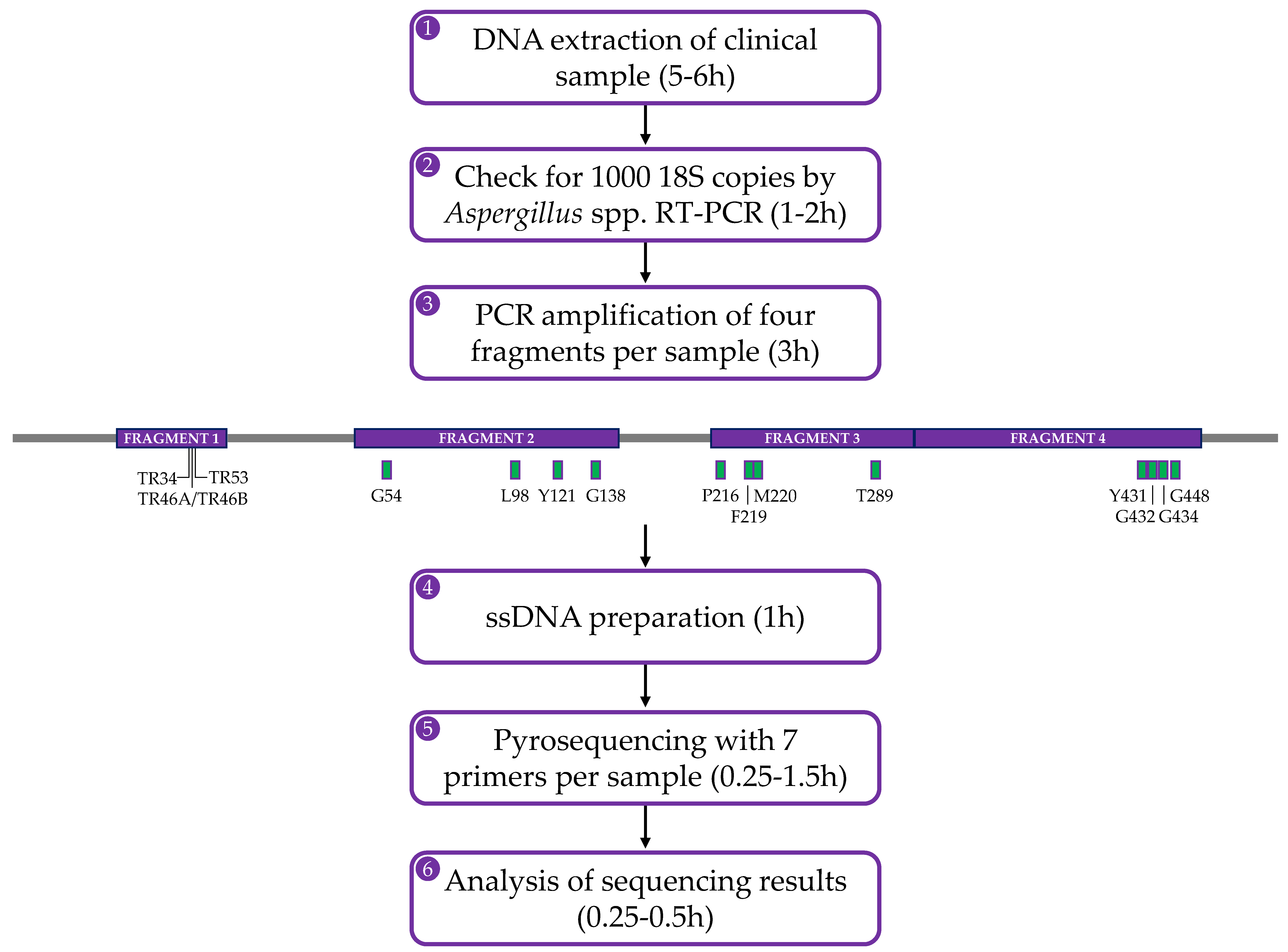